Saturday August 26th was the date Triplemanía XXV happened and a big controversial bet match was scheduled: Dr. Wagner Jr. vs Psycho Clown, mask vs mask. The result, beyond the imaginable, transformed current lucha libre fans vision about the business. But, why?

Dr. Wagner Jr. started his career 32 years ago at the age of 20. He is the son of a renowned luchador called Dr. Wagner who made himself a legend being one of the most acclaimed luchadores at the time he wrestled between 1961 and 1986, months after he lost his mask against lucha idol El Solitario. Dr. Wagner senior is one of the few lucha libre legends who are respected names but had little international exposure. 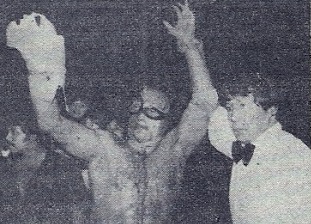 Unlike his father, Wagner Jr. received international exposure at young age, travelling to Japan since he worked for the CMLL in the early 90s. Wagner Jr.´s relationship with CMLL was intermitent so it was with AAA, the two biggest promotions in México. Wagner Jr. rapidly became one of the best referents of lucha libre in that decade, mainly for his work rhythm. He approached indy lands and wrestled all over the country in the most important squares and even the smallest. Wagner Jr. became one of the most impressive and requested luchadores in the country. He wrestled the likes of Negro Casas, Hijo del Santo, Hijo del Solitario, Ángel Blanco Jr., La Parka and L.A. Park; all being crudo rivalries and rating his name to big numbers. Wagner Jr. won a mask vs mask bet match against Máscara Año Dos Mil Jr. five years ago at Triplemanía XX. Psycho Clown is the third generation son of world famed Brazo de Plata, also known as Súper Porky (who had a stint in WCW) part of the trío called Los Brazos (The Arms), legendary trío from the 80s, sons of Shadito Cruz, an old luchador from the 60s. Psycho is 31 years old and debuted 17 years ago working in independent promotions using the name of his father, being called Brazo de Plata Jr. Later on he came to CMLL where he wrestled as Kronos but had no impact and went to AAA in 2007 as part of the trío Psycho Circus. Psycho Clown growed the carácter by himself and went to big scenarios feuding with Texano Jr. first for the Megacampeonato where Texano Jr. retained and after that on a bet match mask vs hair at Triplemanía XXII where Psycho won and Texano Jr. the biggest draw at the moment, was shaved. Last year, at Triplemanía XXIV, Psycho Clown went to another bet match against Pagano on a Street match, winning and shaving Pagano.

Surrounded by uncertainty and distrust, Wagner Jr. faces Psycho Clown on this large feud which ends on a bet match, mask vs mask. Both luchadores are in the peak of their fame and give the fans a match where interventions are minimum (Hijo de Dr. Wagner Jr. makes a couple of interventions on a discreet way) and work old fashion, ripping their masks and with blood shed. Wagner Jr. defends his mask until Psycho makes fast moves on the ropes and captures Wagner on a Canadian destroyer to get the win. The match hardly touches the 20 minutes and we can´t tell it was a mask vs mask match. Not only it was too short, it didn´t have the feeling of the end of an era. It was a good match, sober, not more.

Dr. Wagner gives his mask to his son who cries bereaved, to him be the one who hands the mask to the victorious Psycho Clown. Wagner Jr. repeats, as vain consolation, the same words his father said to El Solitario when he lost his mask against him in 1986: I tell you this: man to man, you can´t defeat me. Then call Psycho a legend, call up his family and telle they are a dynasty on lucha libre. The crowd explodes, cheers Wagner Jr. as he goes out of the ring and Psycho calls him a legend too. All good vibes in the arena Ciudad de México.

Meanwhile at the fandom

Days before the encounter, rumours went to people sharing fake programs “foreseeing” Wagner Jr. was about to lost his mask at Triplemanía XXV since they say: Introducing Dr. Wagner Jr. without the mask, which cause lots of fans selling their tickets for the event on social media and promotion The Crash trying to capitalize the bad publicity to their own good talking about “suprises” the same night that Triplemanía XXV was going to be aired. (The surprise was a new alliance with CMLL were Rush and Pierroth will perform for The Crash).

Then, social media exploded that same night, talking about fraud and Wagner Jr. being a sold out performer, giving his legendary mask to a nobody. Being AAA a distrusted company for several fans, the accusations went towards the product they´ve been offering during the last ten years, concluding that lucha libre meant nothing for the second biggest promotion in the country.

Disbelief in lucha libre has brief but concise history where the fandom criticizes the darkening of lucha in front of puroresu and American wrestling and people looking forward to WWE and New Japan in recent times. People perceive that legends in lucha libre are falling to foreign wrestlers and rookies. In the case of AAA, the work of Psycho Clown is dismissed and taken as a plastic product, even when the numbers say the contrary. Several luchadores deserted from CMLL and AAA in search of better opportunities, either on indy promotions or out of the country. AAA is right now in the eye of the tornado, since fans are talking about boycotting their shows and not watching their tv transmitions. This attitude is taking its toll as the days pass and nobody knows to this date what´s next, since Dr. Wagner just announced changing his name to Rey Wagner because of AAA registering the name Dr. Wagner Jr. in the U.S.