By the time the Indianapolis 500 came around in 2016, 24-year-old Alexander Rossi had only made five previous starts in IndyCar. But what happened on May 29th, 2016 in Indianapolis would prove to be the starting point to a successful career to date.

It was a pretty average summer day in Indianapolis with the skies partially covered by clouds and temperatures hovering just above 80 degrees Fahrenheit. However, this early summer day was far from average, as it was the Sunday before Memorial Day in 2016, the date of the 100th Running of the Indianapolis 500.

The polesitter was James Hinchcliffe, who was in the process of making an impressive comeback after a crash during practice for the 2015 race resulted in life-threatening injuries, sidelining the Canadian for the rest of the season. Joining him on the front row would be Josef Newgarden and 2014 winner Ryan Hunter-Reay. Rookie Alexander Rossi, fresh off of an unsuccessful stint in Formula 1 with Manor, started the race in 11th after an impressive qualifying run.

The three fastest qualifiers dueled it out in the early goings of the race, with Hunter-Reay remaining the leader through the first round of pit stops. Townsend Bell joined in on the action, leading a few laps just before the first caution of the day flew on Lap 47 for debris on the backstretch.

On Lap 54, racing got back underway with Hunter-Reay and Hinchcliffe duking it out for the lead. 10 laps later, two-time race winner Juan Pablo Montoya struck the wall exiting Turn 2, bringing out the race’s second caution.

After a round of pit stops under yellow, Hinchcliffe and Hunter-Reay resumed battled for the lead. Then three-time race winner Helio Castroneves later joined the battle, leading laps for the first time that day.

Soon after, Sage Karam attempted, unsuccessfully, to go side-by-side with Bell into Turn 1, ending the young American’s race as Bell was able to continue. Another round of pit stops ensued, and the halfway mark was reached. 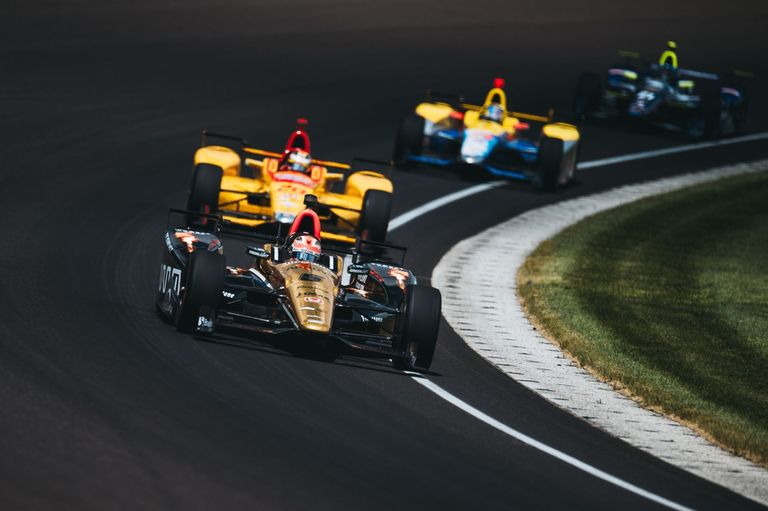 Racing resumed on Lap 104, with Castroneves in the lead. Soon after the restart, Hunter-Reay, Bell, and Tony Kanaan overtook the Brazilian, and a three-way battle for the lead ensued. Lap 115 brought out the race’s fourth caution, as Mikhail Aleshin hit the Turn 1 wall, collecting Conor Daly in the process.

Routine pit stops ensued, but they turned out to be far from routine. While exiting pit lane, Bell made contact with Castroneves, causing Bell to turn into Hunter-Reay, sending both drivers nose-first into the inside wall, taking them out of contention. At the same time, Bryan Herta, Alexander Rossi’s race engineer, made the call to keep the rookie out during the pit stops. Alex Tagliani did the same, giving him the lead after starting last.

Tagliani and Rossi battled for the lead until they had to make their pit stops, giving the lead back to Castroneves and Kanaan. After a relatively lengthy green flag run, an unfortunately-timed caution caused by Buddy Lazier caused multiple cars to be “stranded”, forcing them to come into the pits while they were closed so they wouldn’t run out of fuel.

Castroneves lead the race when it restarted with just over 40 laps to go, but was quickly put out of contention on Lap 161 when J.R. Hildebrand clipped Helio’s left rear fender, forcing Castroneves to pit for repairs. Two laps later, Takuma Sato brought out another caution after hitting the Turn 4 wall, and another round of yellow flag pit stops ensued.

Pretty much every driver opted to pit, but the unfortunate timing of the caution rendered it unlikely that they would make it all the way to Lap 200 on fuel. Kanaan, Newgarden, and Carlos Munoz battled for the lead, before diving into the pits one at a time. With five laps to go, rookie Alexander Rossi had the lead, but very little fuel left.

The last couple of laps were nerve-wracking for Rossi and the #98 Andretti team, although Rossi had a lead of over 30 seconds. On the final lap of the race, Rossi’s engine began to sputter out on the backstretch, and he had to coast to the finish line, where he finished just over four seconds ahead of runner-up Munoz.

Had the race lasted one more lap, Rossi would have finished last of all drivers on the lead lap, as he didn’t have enough fuel to make it around the track even one more time. 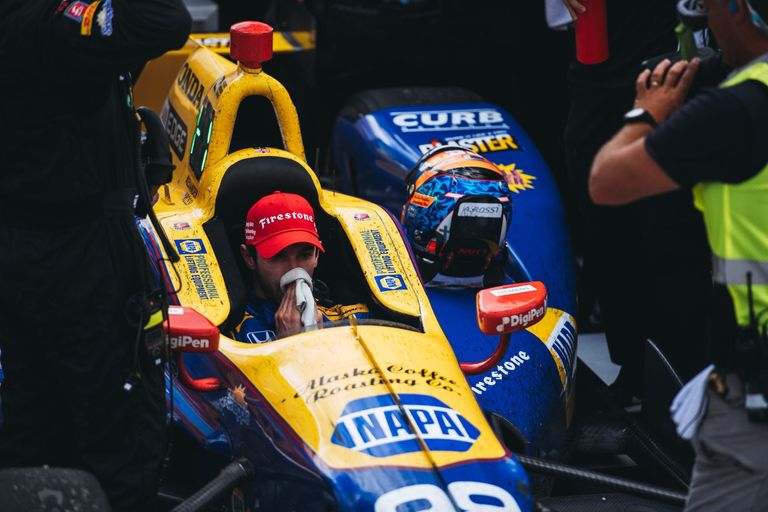 Winning the Indianapolis 500 is said to cement a driver’s place as “racing immortality”, but when you win the race as a rookie, that immortality is even more special. In 106 races, only nine first-timers have won on their Indianapolis debut. (One of those nine being Ray Harroun, who won the first edition of the race in 1911.)

Since then, Rossi has eight IndyCar wins and 28 podiums to go along with a second-place finish in the series championship in 2018. After seven seasons at Andretti Autosport, the now 31-year-old Californian has made the move to Arrow McLaren SP for the 2023 season and beyond. With this move, only time will tell if Rossi will win the 500 for a second time.