Starting at Daytona and ending in Phoenix, we saw lots of exciting racing in the Truck Series in 2022. Here are my picks for the top five moments of the 2022 Camping World Truck Series season.

After two years of finishing runner-up in the championship, Zane Smith finally got the job done and won his first championship in the NASCAR Truck Series. Smith started the season strong, winning the opener at Daytona. He fought Cup Series drivers Alex Bowman and Kyle Busch during an overtime restart at Circuit of the Americas to earn his second win of the season. He earned win #3 at Kansas. During the playoffs, he was incredibly consistent, only finishing out of the top ten at Talladega. Smith’s F150 was on rails at Phoenix, earning pole position and leading 77 laps to win his first title in the Truck Series.

#2: Ty Majeski earns two wins in three races and advances to the championship race in his first full-time season

Wisconsin late model ace Ty Majeski lit up the NASCAR Truck Series late in 2022. Majeski, who before 2022 had never run a full season in the Truck Series, earned pole at Richmond, led 45 laps to win at Bristol, and 67 at Homestead-Miami to earn his second career win. With his win at Homestead, Majeski locked himself into the championship race. At Phoenix, he would qualify eighth, third of the four championship drivers. With four laps remaining, Majeski sent his Toyota Tundra into Turn 3 to get a run on Zane Smith and spun out, sending him down to 20th in the race and fourth place in the championship.

Parker Kligerman, part-time driver and pit reporter for NBC Sports earned his third victory in the Truck Series battling with Zane Smith at Mid-Ohio. Driving for small Henderson Motorsports, he qualified second and lead 56 of 67 laps. During the final overtime restart, Kligerman and Smith had an incredible battle for the win, with Smith only using the bumper on the last turn of the last lap. Kligerman would drive in four more races in 2022, earning one Top 5 and two Top 10s. 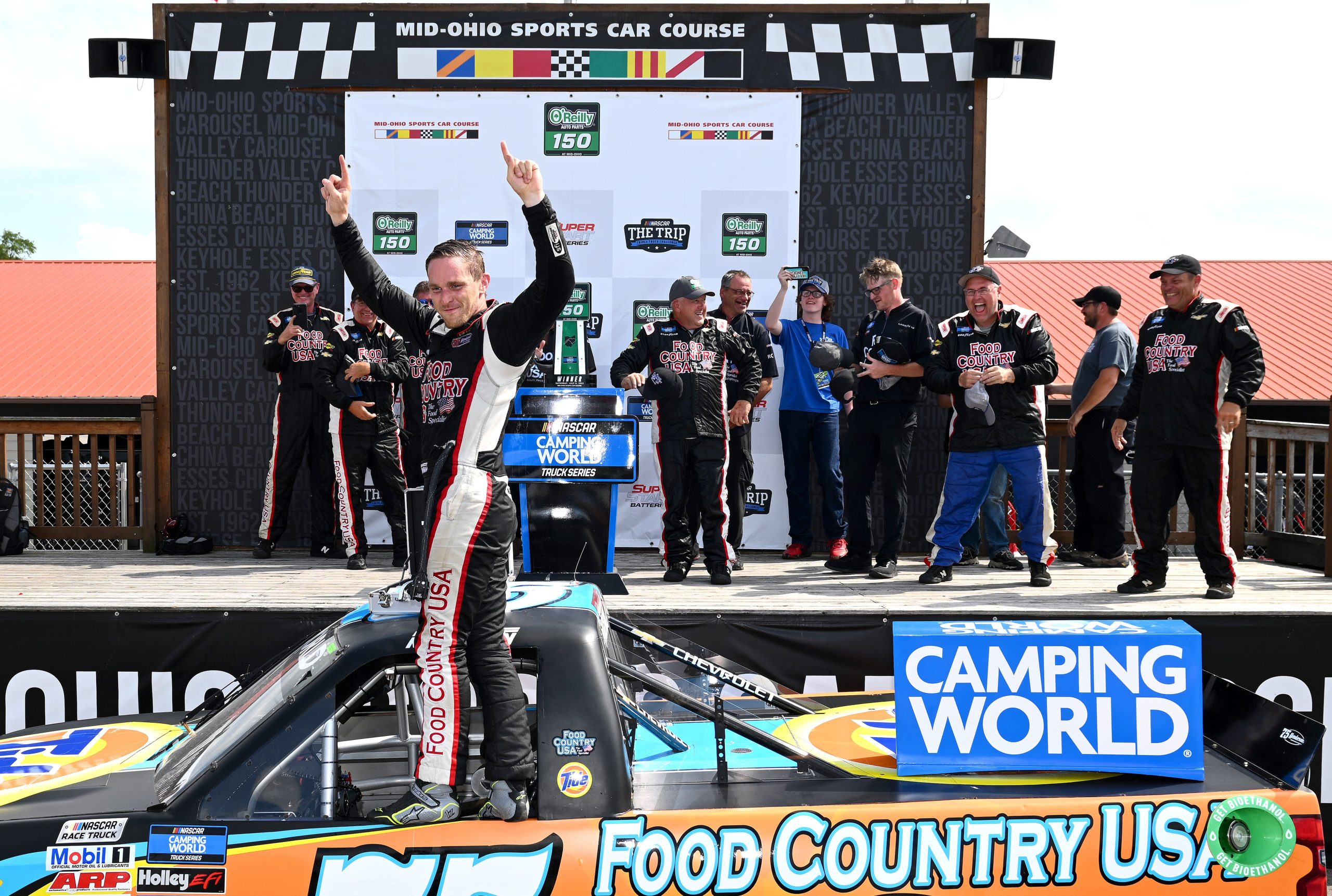 #4: Carson Hocevar wins pole at Sonoma with a broken ankle

Carson Hocevar was spun by Derek Kraus on the last lap at Gateway, and struck by the #5 Truck of Tyler Hill. The hit was right where the fender meets the cab, right around where the driver’s right ankle sits. The crash broke Hocevar’s tibia at the ankle and required surgery after the race to install a screw. Despite the injury, Hocevar soldiered on to Sonoma. He was seen on crutches in the garage area at the race track. During qualifying, Carson beat Cup Series drivers Kyle Busch and Ross Chastain to place his Silverado on the pole. Bad luck followed suit as Hocevar spun his truck and crashed, but his qualifying lap held. Hocevar would run 12 laps and be replaced by Daniel Suarez who brought the truck home in sixth.

#5: A thrilling overtime finish at Circuit of the Americas

With a stacked field of Cup Series and Xfinity drivers and road course aces combined with the difficulty of the track, the fourth race of the season at Circuit of the Americas was going to be a great one. Xfinity driver Sheldon Creed earned the pole but after an unapproved adjustment, Zane Smith started in the first position. Alex Bowman and Kyle Busch, along with veteran driver Parker Kligerman and truck series talents Smith and John Hunter Nemechek fought all race for the top spot. COTA’s 0.62-mile straightaway gave fans a thrilling attempt at a pass for the lead in the closing laps. Stewart Friesen and Bowman, running 2nd and 3rd, divebombed the corner and collected Busch, the leader. This collision allowed Zane Smith to easily grab the lead and win the race.

With 2022 in the books, it is time to look forward to the 2023 Truck Series season. With new teams, old teams with new manufacturers, and familiar faces in new places, there are a lot of exciting things to watch out for in 2023.

Only 49 days until the green flag drops for the Truck Series at Daytona.