NASCAR heads to Phoenix for the season finale, and the Xfinity Series looks to crown a first-time champion.

The NASCAR Xfinity Series Championship will be decided on Saturday, and if recent history is any precedent, it’s one man’s title to lose. For Noah Gragson, anything less than the championship this season could be considered a failure.

Gragson has claimed victories at a variety of tracks: Homestead, Texas, Bristol, Kansas, Darlington, Pocono, Talladega, and most importantly, Phoenix. At the spring Phoenix race, he qualified second and won, leading 114 laps in the process.

With eight wins and 20 Top five finishes in 31 races this season, Gragson has been ever-present. There’s a good reason why he’s a massive betting favorite to put his #9 JR Motorsports Chevrolet into victory lane on Saturday and claim an Xfinity Series title before he makes the full-time move up to the Cup Series, driving the #42 for Petty GMS Motorsports next season.

Following last weekend’s memorable (for better or for worse) victory in Martinsville, Ty Gibbs is the talk of the series. Race fans at Martinsville and beyond let Ty Gibbs hear it after he bulldozed his way into the Championship 4. His actions during and following the race have solidified his spot as the sport’s “black hat”, even going as far as comparing himself to Jesus.

Other than Gibbs himself, the biggest beneficiary of his move was the on-the-bubble Justin Allgaier. Since Brandon Jones didn’t claim the victory he deserved, Allgaier advanced into the NASCAR Xfinity Series Championship 4 on points.

Josh Berry raced his way into the finale in Vegas a few weeks ago, smacking the wall while passing AJ Allmendinger for the lead with 34 laps to go. Berry has been a shining example of the consistency of JR Motorsports this season with his three wins and 11 Top five finishes. 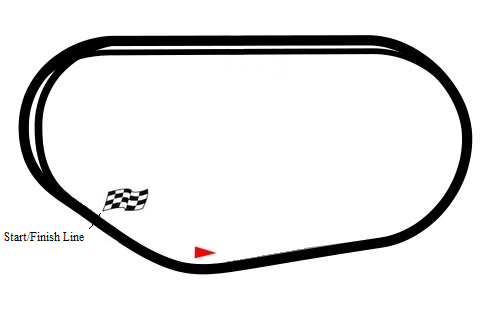 Phoenix Raceway is a 1-mile quirky tri-oval that opened in 1964 that has seen a few renovations and reconfigurations in the past decade or so. After 2011’s reconfiguration, the grass infield and curbing on the dogleg were replaced with a paved apron. The paved apron gave drivers the option to shortcut the dogleg, at the discretion of each race’s sanctioning body.

In 2018, more renovations moved the start/finish line to just coming out of what was turn 2, now turn 4. The big Bobby Allison grandstand now wraps from turn three all the way around the dogleg. Phoenix also offers one of the most unique seats in motorsports on the hill overlooking turns 2 and 3, where fans can see the racing action and a gorgeous view of the surrounding desert.

Phoenix Raceway has hosted a NASCAR National Series race since 1995’s Truck Series Lucas Oil 150. In the past, it was also home to IndyCar/CART and several sportscar series, including IMSA GT and Can-Am.

Admittedly, my predictions for Xfinity Series races haven’t gone so well. In my small handful of these preview articles, I have yet to predict a correct winner. That means it has to be due, right?

It’s Noah Gragson’s championship, he just has to pick up the trophy. No one has had an answer for Gragson’s pace, particularly in the final half of the season where he’s been, by far, the most dominant driver in NASCAR’s secondary series.

Gragson’s biggest worry may just be Ty Gibbs sending him into the Turn 4 wall on the final lap of the race. With the title on the line, if Gibbs is in a situation where moving someone can claim him a victory, it could be expected. Even if Gibbs’ own grandfather said he wished last week’s wreck of Brandon Jones never happened.

How To Watch – All times EST