The NASCAR Xfinity Series heads to the always-exciting Martinsville Speedway for the Dead On Tools 250, the final race of the playoff round of eight.

NASCAR heads up the east coast to Virginia to fan-favorite track Martinsville Speedway, for a make-or-break weekend for playoff drivers. In the Xfinity Series, six drivers will be vying for the remaining two spots in the Championship 4, exactly the drama the playoff system was designed to create.

As playoff points stand, Ty Gibbs and AJ Allmendinger are above the Championship 4 cutline. Allmendinger is only five points clear of Justin Allgaier below the cutline and won’t feel comfortable with anything other than a win on Saturday. Ty Gibbs would obviously like a win but has a 25-point gap between him and Allmendinger and can advance with a solid performance at Martinsville.

For the four drivers currently below AJ Allmendinger and the playoff cutline, it’s win-or-go-home time. Justin Allgaier’s rough outing last week at Homestead saw him slip behind Allmendinger. Allgaier is now just two points ahead of Austin Hill, who had a quiet top-ten performance to stay in the playoff hunt.

A Repeat for Jones?

The longest shots to make the Championship 4 at this point are Sam Mayer and Brandon Jones. Mayer is 28 points below the cutline and Jones is 38 behind. The biggest cause for optimism for these drivers is that they were at the front of the NASCAR Xfinity Series race at Martinsville in the spring. Brandon Jones took the win over his Joe Gibbs Racing teammate Ty Gibbs in NASCAR overtime.

Ty Gibbs made headlines for all the wrong reasons following the Martinsville spring race. He confronted Sam Mayer post-race and threw a few punches before the two were separated. Gibbs later apologized, but the event made him a pariah among NASCAR Xfinity Series faithful.

Now, both are fighting for one of the last Xfinity Championship 4 spots. pic.twitter.com/Th58GNoUqt

If Saturday’s Dead On Tools 250 is anything like the aforementioned spring race, it could make for fantastic drama for the final two places in the Championship 4. Four of the top five finishers in the spring Martinsville race are now playoff drivers who have yet to clinch their spots. Those drivers will come into the famous paperclip track with a world of confidence, and the action on the track should reflect that drama. 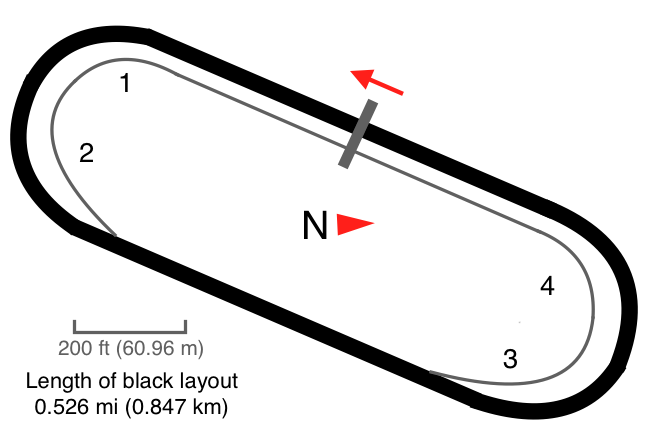 Martinsville Speedway is a track unlike any other in NASCAR. A half-mile short track with long straightaways and tight hairpin turns at each end. Maintaining speed coming out of the turns is crucial. That is if you don’t get bumped into the wall in the hairpin.

Martinsville was one of the first paved ovals in stock car racing history. It was initially built in 1947 even before the formation of NASCAR. The first NASCAR-sanctioned race at Martinsville was on July 4, 1948, and the series has gone to the paperclip every year since.

Ty Gibbs set the Xfinity Series track record with his 19.728 pole lap at the spring ‘Call 811 Before You Dig’ 250. That time was less than a second off Joey Logano’s Cup Series lap record from 2014. Since the start of NASCAR playoffs, Martinsville has played host to this crucial cutoff race to shape the Championship 4.

Last week I thought Justin Allgaier would have a standout performance that would put him in the Championship 4. That didn’t quite work out. Allgaier had a good run at the spring race but was involved in a NASCAR overtime wreck along with Noah Gragson. If he can keep his car clean and pointing in the right direction, he should be right at the front of the field.

I think the day will come down to AJ Allmendinger using his experience to stay alive in what could be a chaotic cutoff race. Allmendinger won the Xfinity Series Dash 4 Cash $100k through his third-place finish at the spring race. A result he achieved in part by avoiding the overtime wreck.

How To Watch (All Times EST)