The Japanese Grand Prix is back for the first time in three years. Here’s how to watch and the key storylines heading into the weekend.

Max Verstappen has another chance to clinch the title this weekend in Honda’s backyard. Formula 1 is back at Suzuka for the first Japanese Grand Prix since 2019. While a lot has changed since then, the challenge and fun of Suzuka remain the same, and there is another opportunity this weekend for a championship-clinching moment.

That scenario is familiar to Suzuka, which has seen 11 different championship clinches over the years. From the early battles between Senna and Prost to Michael Schumacher’s first championship with Ferrari, and most recently Sebastian Vettel clinching his second title in 2011, Suzuka is an integral part of Formula 1 history. The latest clinch will be the most relatable to Max Verstappen, who like Vettel can clinch his second championship in a Red Bull at the Japanese Grand Prix.

Verstappen looks to rebound after losing his six-race win streak last week, with his teammate Sergio Perez taking over the top step of the podium in Singapore. A poor qualifying strategy sent him to an eighth-place start, and he was never able to recover during the wet race under the lights, finishing right where he started despite a litany of safety cars and retirements.

So how can Verstappen clinch his second championship this weekend? Well, it’s a lot simpler than his clinching scenarios in Singapore. Verstappen needs to outscore Charles Leclerc by eight points and Sergio Perez by six points. The easiest way to do that is for Max to win the race and secure the fastest lap. If he does that, he is the champion.

If he wins but doesn’t get the fastest lap, Charles Leclerc would need to finish second to keep his hopes alive. Regardless, if Verstappen wins, Sergio Perez would be eliminated from contention.

Japan has been home to the drivers' title-deciding race on 13 occasions, with the most recent example back in 2011 when Sebastian Vettel scored his 2nd championship 🏆

Will Max Verstappen add his name to this list on Sunday? 💬#F1 #JapaneseGP #Autosport pic.twitter.com/fqQ4gtFDYC

The Suzuka International Racing Course was built in 1962 and has hosted the F1 Japanese Grand Prix every year except two (Fuji hosted the race in 2007 and 2008) since 1987. It is 5.807 km (3.6 miles) long and is the site of several memorable F1 moments. From Senna and Prost’s collisions in its early years to great drives and overtaking by Kimi Raikkonen and Fernando Alonso in the mid-2000s, and the recent turbo-hybrid cars flying through the high-downforce sections it is always a sight to behold. Michael Schumacher holds the record for most wins at the circuit with six. Lewis Hamilton sits just behind with five and can tie Schumacher with another victory this weekend.

A Lap of Suzuka

The drivers have to be precise at Suzuka with several tricky corners and daring high-speed sections. Starting down the main straight drivers head toward the fast Turn 1 and quickly into Turn 2 as they progressively slow down for the 180-degree turn. Turns 3 through 6 make up the famous “S” Curves where the drivers flick right and left several times, requiring perfect car placement.

Turn 7 is a long, flat left-hander dubbed the Dunlop Curve, which feeds into Sector 2 and the two Degner corners which are fast, flowing right-handers that force the drivers to push to the limit. Then it’s under the bridge and into the kink that is Turn 10 and into the Turn 11 hairpin. A long “straight” follows that is flat out but makes up Turn 12. Turns 13 and 14 make up Spoon Corner which is two successive left-handers which progressively slow down similar to the first two corners. The exit is important to nail as a long straight follows.

The final sector starts with the crossover point as the drivers are now on the bridge that they previously went under. The famous, flat-out 130R corner quickly approaches which leads into the final tight chicane and back onto the main straight.

This weekend’s race will be 53 laps long and will feature one DRS zone, situated on the main straight. 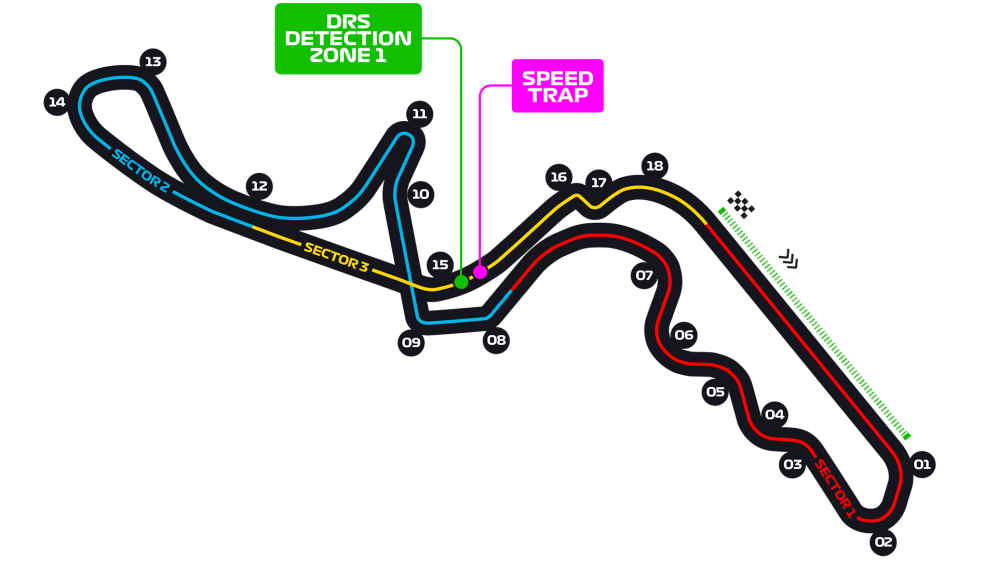 I took Max Verstappen last week and said I would until he loses, and in Singapore, it finally happened. It’s hard to pick anyone else at this stage though, so I have to take Max again here. It’s Honda’s home track, the title is firmly within reach, and one of his main competitors, Sergio Perez, will surely be ushered out of the way by Red Bull if he becomes an impediment. The Red Bull car is stronger than Ferrari and I think Max will want to get the title talk over with.

*Take note of the starting times for this weekend. For those on the U.S. East coast, the race will be early Sunday morning. For those in the rest of the U.S., it will begin either at midnight or late Saturday night.*