Newgarden was indignant. His answers were short. He was a bit snarky. He didn’t seem like his normal self.

On Saturday though, just a little more than 31 hours after he was disappointed in his third-place qualifying effort, he found himself in victory lane.

“I’m much happier tonight, I can tell you that,” Newgarden said. “I was really a little bit frustrated yesterday just because I knew we had a pole-winning car, we didn’t put it together. Look, yeah, I’m very competitive, and I don’t always show it, but you want to do well every session, every practice, every qualifying. You want to be the best. If you don’t want that, then why are you here?”

With final practice just a few hours away, in a practice that was assumed to be similar to race conditions starting 24 hours ahead of the scheduled green flag time, Newgarden had to reset.

That was easy for him.

“After an hour of being pissed about it, we just went to practice and we move on,” Newgarden said. “That’s all there is to it. Yeah, I mean, you’re going to get that. Look, we all want to kick each other’s butts. That’s what it’s all about. Like I was saying, it’s a competitive sport. We all want to be the best. That’s what makes it fun.”

Newgarden is no stranger to success at Iowa Speedway.

In the past six seasons, Newgarden’s worst finish at the short oval was a P6 run in 2017 in his first year with Team Penske. With Saturday’s victory, he earned his fourth podium at Iowa in the same amount of time.

The win is Newgarden’s fourth NTT Data IndyCar Series victory of the season and extends his points lead over Alexander Rossi to 29 points.

Coming into the weekend, his lead on the NAPA Auto Parts driver was only back by four.

Although, Newgarden thinks the points championship is still wide open. He’s just focused on running well at each race.

“I don’t think there’s urgency now,” Newgarden said. “There’s a lot of people still in it. We just got to make the most of each weekend. If you got a winning car, we try to win. If we have a fourth place car, try to finish fourth. That’s what we’ve been doing.”

One of those drivers that is still very much ‘in it’ with five races to go in the season is second-place finisher Scott Dixon.

Dixon’s team used a bold strategy call to stay out for an extended period of time during the last rotation of green flag pit stops to come out of no where and finish in the runner-up spot.

“I just have to thank the team,” Dixon said. “We just tried to go long on that last long run, and luckily, we caught the yellow and it kept us on the lead lap, and there were only nine cars on the lead lap.”

Earlier in the race Dixon had been lapped.

It looked like he didn’t have the car that could salvage anything close to a podium finish.

“Honestly, (to be) second…I thought we would be 22nd,” Dixon said. “The strategy was great. We didn’t quite get the win, but oh my gosh, that’s crazy, but I’ll take it.”

Rounding out the podium was the defending race winner at Iowa in James Hinchcliffe.

Since his P1 finish in Newton a year ago, his No. 5 car has not made a trip back to the podium, let alone victory lane, until Saturday night.

“It’s kind of shocking actually that it’s the first podium of the year,” Hinchcliffe said. “It just kind of sums up our year. We had good racecars on Sunday, had bad luck. A mistake or two of our own. We’ve been there or thereabouts. Fighting for the odd win, fighting for a couple podiums, [we’ve] just had unlucky breaks.”

Although the season hasn’t gone how Hinchcliffe had hoped for, he is still optimistic about finding success by the end of the year.

And, we know the Schmidt Peterson cars have at least a little bit of giddy up.

“That’s racing,” Hinchcliffe said. “We just got to keep doing what we’re doing as a team and hopefully see a few more podiums and a win or two before the end of the season.”

The NTT Data IndyCar Series will return to the track on Sunday, July 28 at the Mid-Ohio Sports Car Course for the Honda Indy 200. The race is scheduled to start at 3:00 p.m. ET and will be televised nationally on NBC. 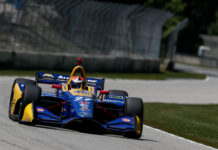 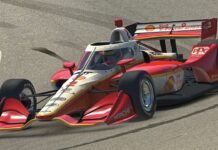 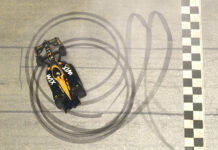 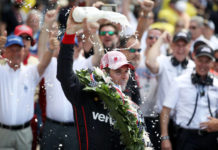 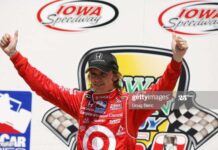 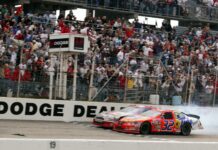