Alexander Sims has set the first benchmark of Season Five of the ABB FIA Formula E Championship. The BMW i Andretti Motorsport rookie driver had the fastest time for both sessions on day one of pre-season testing. The British driver’s best lap time of 1:17.553s was posted in the afternoon session. His teammate, Antonio Felix da Costa, had the third-best time of the day. The Portuguese driver’s best lap time was 1:17.727s.

Despite the change in cars and improved technology, competition remained close at the top of the grid. DS Techeetah driver Andre Lotterer was second in the time sheets. The German driver’s best time was 1:17.654s. Defending Formula E Champion Jean-Eric Vergne came in with the seventh fastest time with a 1:18.033s. Vergne had a consistent day, his fastest times from both sessions were only 0.002s off one-another.

Reigning Formula E Constructor’s Champions Audi Sport Abt Schaeffler was close to the top time. Both drivers, Lucas di Grassi, and Daniel Abt posted the fourth and fifth fastest times of the day. Di Grassi posted a 1:17.732s and Abt posted a 1:17.819s. Hopefully, they can improve the pace of the car but they look quite competitive. They also logged in plenty of laps throughout both sessions. Di Grassi logged in a total of 78 laps and Abt 85 laps respectively. Since they had reliability issues at the beginning of last season, Audi are taking precautions not to repeat the same mistake.

Mahindra Racing decided to announce their driver line-up on day 1 of testing. Jerome d’Ambrosio, a Formula E veteran, posted the sixth fastest time with a 1:17.987s. The Belgian driver’s teammate will be former F1 and DTM driver Pascal Wehrlein. The German driver was still learning the intricacies of his new car and posted the thirteenth fastest time with a 1:18.606s. It will be interesting to see how quickly both adapt to the new car and new team.

Jose Maria Lopez, of GEOX Dragon, came in with the ninth fastest time of 1:18.154s. Max Gunther, a GEOX Dragon rookie test driver, didn’t get much time on track due to technical issues with the car. The German driver only logged in three laps, with his fastest lap being a 1:32.242s. The second seat remains open for GEOX Dragon, the German driver will hope to have a good run tomorrow.

Felipe Massa, a former F1 driver and rookie Formula E driver, rounded out the top ten with a 1:18.176s. This was his first public showing in the new Formula E Gen 2 car. The Brazilian looked fast despite his lack of experience in electric race cars. Edoardo Mortara, Massa’s teammate, logged in the fifteenth fastest time with a 1:18.707s.

NIO Formula E’s new driver Tom Dillmann logged in the fastest time for the team with a 1:18.504s. That time placed him 12th in the time sheets. Dillmann looked faster than his teammate, Oliver Turvey, who was 17th. The British driver’s fastest time was a 1:19.053s, way off the pace from his teammate.

The Panasonic Jaguar Racing Team hoped for a better performance on test day. Mitch Evans logged in the sixteenth fastest time with a 1:18.747s, which he posted in the morning session. The Kiwi driver’s teammate, Nelson Piquet Jr. couldn’t get close to that. The Brazilian driver’s best time was only a 1:21.629s, which placed him 20th in the time sheets. Panasonic Jaguar Racing better find the pace soon, otherwise, they could be left behind at the start of the season.

Mercedes backed HWA Racelab didn’t get off on the right foot on day one of testing. DTM Champion Gary Paffett posted the fastest lap-time for the team with a 1:19.144s, which placed him 18th. The British driver posted that time in the second session, his first session was cut short due to an accident on the start/finish straight. Paffett will look to improve his time in tomorrow’s session but looked solid for his first time in the car.

Fellow Formula E rookie and current F1 driver Stoffel Vandoorne also had some time in the new car today. Unfortunately, the Belgian didn’t get to participate in the second session of the day. His car was held in the garage due to a technical issue with the car. Vandoorne’s best lap was only a 1:21.023s, but he only logged 13 laps in the car. Surely, he will be keen to get plenty of track time to acclimatize himself in the new car and set a better lap-time.

That concluded the first day of Season five of the Formula E Pre-Season test. Will BMW I Andretti Motorsport continue to lead the charts for the remaining test days? Surely, the other teams will try to achieve just that. If you would like to follow the sessions live, Formula E will be keeping a live-time during all sessions. This can be found here http://www.fiaformulae.com/en/live-timing. 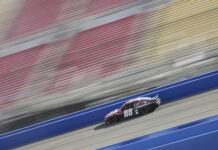 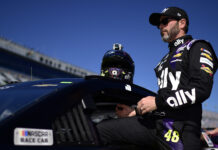 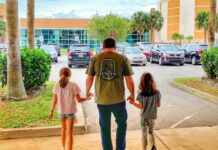