The 12th round of the 2018 Formula 1 season will take place this weekend at the Hungaroring, home of the Hungarian Grand Prix. The 33rd edition of this Grand Prix will take place at the seldom-used twisting and dusty circuit outside the town of Mogyorod, near Budapest. This race is followed by the summer break for the season. This gives the drivers and teams a welcome period to cool off and hit the refresh button.

The Hungarian Grand Prix (‘Magyar Nagydíj’ in the local dialect) joined the F1 calendar in 1986 as the first race to be held behind the then Iron Curtain in Eastern Europe. Nelson Piquet won the inaugural race. This is the track closest to Finland – a country with a considerable motorsport tradition but no Grand Prix. As a result, the Hungaroring attracts a sizable Finnish crowd every year. The two Finnish drivers on the grid, Kimi Raikkonen and Valtteri Bottas will receive very vocal support from their countrymen, making it almost like a home race for them.

The first few races at the Hungaroring saw many gripping battles between the likes of Ayrton Senna, Nigel Mansell and Nelson Piquet. Mansell’s win in 1989 from 12th on the grid (on a circuit that offers few overtaking opportunities) ranks as one of the more dramatic races here. The circuit has witnessed the maiden Grand Prix wins of the future world champions’ Damon Hill (1993), Fernando Alonso (2003) and Jenson Button (2006).

Nelson Piquet won the first two races of the Hungarian GP for Williams. The first decade of this Grand Prix was dominated by this team, as Williams won seven of the first twelve races. Since then the pendulum has swung towards McLaren, with the British team emerging winner a record eleven times. Ferrari with seven wins is the third most successful constructor and the team has won two of the last three races.

The 4.381 km Hungaroring circuit with 14 corners (slow and medium-speed corners) and one long straight is one of the slowest tracks on the F1 calendar, with an average speed of only 190 km/h. The twisting, bumpy and narrow circuit is front-limited with the predominantly long and slow speed corners demanding a high downforce setup.

The laps are done at full throttle 56% of the time and the fuel consumption is high. The slow nature of the corners in the extremely high heat and dry conditions leads to high brake-wear. As the track is rarely used, it offers very low grip during the practice sessions. The track conditions evolve and change significantly by race day as the rubber is laid down.

Sector 1 (Turn 1 to Turn 3) has one of the longest runs to Turn 1 at 610 meters, followed by a tight hairpin and the downhill run to Turn 2. The best overtaking spot on the track is after Turn 1. The sharp left-hander at Turn 2 is followed by a kink leading to Turn 3, which is followed by a short straight.

Sector 2 (Turn 4 to Turn 11) starts with an uphill climb to Turn 4, followed by a sharp right-hand corner at Turn 5. This leads into the bumpiest part of the circuit with a lot of twisty corners and chicanes from Turn 6 to Turn 10. The last corner at Turn 11 is a fairly fast right-hander leading to a short straight.

Sector 3 (Turn 12 to Turn 14) starts with the short straight leading to a sharp right-hander at Turn 12 followed by a hairpin at Turn 13. The final corner at Turn 14 is a fast right-hander leading into the start-finish straight.

Unlike recent races, an additional third DRS zone has not been added so far. This track was known for its rare overtaking opportunities in the early years and the track layout was changed in 2003 to improve this. The pole sitter has won only three out of the last ten races surprisingly, but all too frequently the circuit has produced processional races.

Pirelli tyre choices for this race are the white-striped medium tyres, the yellow-striped soft tyres, and the purple-striped ultrasoft tyres. Pirelli used the same tyre combination at the last race in Hockenheim. The red-striped supersoft tyres have been skipped and the softer ultrasoft tyres used instead. The drivers have chosen seven or more sets of the ultrasoft tyres of the thirteen sets allocated to them.

The race has traditionally been a two-stop race, but with the durability of the tyres this year we could well see mixed strategies. The very hot and dusty conditions at this track, the slow corners and the high downforce of the cars could well create some unknown variables as far as tyre durability goes. There is a 60% chance of rain this weekend which could create some welcome relief from the ultra-hot conditions. 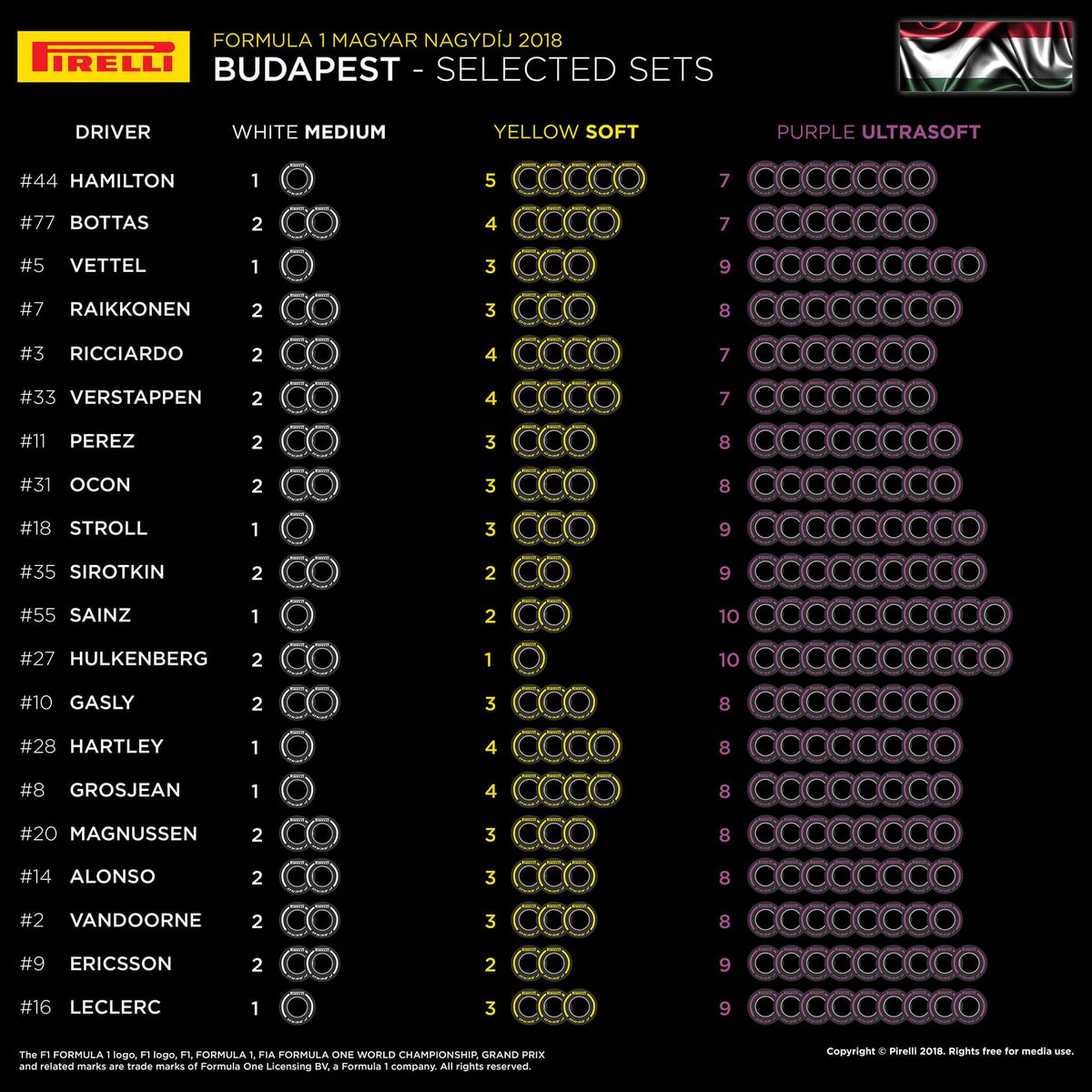 Mercedes (310 pts) has taken the lead back in the constructors’ championship by eight-points from arch-rival Ferrari (302 pts). Red Bull Racing (211 pts) is in third position having lost ground to the top 2 teams in recent races at the power circuits.

Renault (80 pts) leads the midfield teams in fourth position. Force India (59 pts) is in fifth position. Haas F1 (59 pts) has the same number of points and is in sixth position. McLaren (48 pts) is now in seventh position.

Ferrari returns to a happy hunting ground in Hungary. The team has won two of the last three races here. The hot, dusty conditions and the slow track is well-suited for their car. The SF71H performs well on the ultrasoft tyres and takes care of the tyres better in hot conditions.

Mercedes come off a 1-2 finish at the German GP. The team won here in 2016, but in recent years has found this track a difficult one. Red Bull Racing with their superior chassis will have an opportunity to win a race at this track which nullifies engine power.

The midfield battle is as tight as ever with the teams from fifth to seventh positions separated by 11 points. Renault leads the pack but will be under pressure from Haas F1 and a fast-improving Force India team.

Hamilton (188 pts) leads the title race by 17 points from Vettel (171 pts). The lead has swung between the two drivers all season long. Kimi Raikkonen (131 pts) is in third position with strong podium finishes in the last four races. Valtteri Bottas (122 pts) is in fourth position now. Daniel Ricciardo (106 pts) is now fifth and rounds out the top 5 positions in the drivers’ championship.

Vettel is the defending champion at the Hungarian GP. After the disastrous outing at his home race in Hockenheim, where Vettel threw away a sure win with a mistake, he will be looking for a win here. Hamilton, on the other hand, scripted a fairy-tale victory coming from 14th on the grid in Germany. Vettel will be looking to halt his momentum and go into the summer break with a win.

But both title rivals will have to contend with Ricciardo and Max Verstappen. Both Red Bull drivers will be on strong ground on this track which will favour the RB14 car. Vettel has tipped them as pre-race favourites to win the race. It will be close between the top 3 teams as it has been all season long.