The sixth round of the Formula 1 World Championship will take place this weekend around the twisting and narrow streets of Monaco. The Monaco Grand Prix is one of the oldest and most prestigious races on the F1 calendar. This tiny principality on the French Riviera is the playground of the rich and famous, who add a high degree of glitz and glamour to the Grand Prix.

Preview of the Monaco Grand Prix

Monaco is a constitutional monarchy ruled by Prince Albert II, from the House of Grimaldi. The first motor race was held there in 1929 and the first Grand Prix was held as part of the very first season of F1 in 1950. After a brief break (1951 to 1954), the race resumed in 1955 and since then has been run 63 times in a row uninterrupted.

The very first F1 race held in Monaco was won by Juan Manuel Fangio, the first-ever Grand Prix win for the great Argentine driver. The wackiest F1 race ever is probably the 1996 Monaco Grand Prix which saw only three cars finish the race.

Many F1 drivers reside in Monaco as it is considered a tax haven. For Charles Leclerc of Sauber, who hails from Moncao, this is his first home Grand Prix.  In contrast to other Grand Prix weekends, the first two free practice sessions are held on Thursday, not Friday. The yachts of the rich and famous are anchored in the Mediterranean harbor and are the venues for a beehive of social activities for most of the week.

Winning after 100 laps of the #MonacoGP for Alfa Romeo pic.twitter.com/4EDCI6zBno

Alain Prost and Ayrton Senna with ten wins between them have made McLaren the most successful team at Monaco (15 wins). Ferrari trails a distant second (9 wins) and won last year. Red Bull Racing during their dominant period from 2010 to 2012 won three times. Mercedes for all their troubles in recent years at this venue has won four races (2013-2016).

During the 1960s, Graham Hill became the “King of Monaco,” winning 5 times for the BRM and Lotus teams. Ayrton Senna then owned the Principality by winning six times from 1987 to 1993, conceding only one win to arch-rival Alain Prost (4 wins) in 1988. Michael Schumacher with five wins is joint second on the leader board with Hill.

The 3.337 km street circuit demands high precision driving. The narrow, bumpy circuit surrounded by Aramco barriers does not allow even the tiniest of errors from the drivers. The twisty, slow nature of the corners demands a high-downforce aerodynamic package on the cars. This is a low fuel consumption circuit, with medium brake wear.

The average lap speed is the slowest at any F1 venue at approximately 160 km/h. Each of the corners on this circuit have distinct names and great history. The nineteen slow and medium-speed corners on the circuit include some of the most iconic corners in F1.

Sector 1 (Turn 1 to Turn 4) begins with a quick uphill sprint on Albert Boulevard into Turn 1 (the Saint-Devote corner). This is a 90 degree right-hand turn into the Avenue d’Ostende, followed by a long left-hander at Turn 3 (Massenet). Coming out of Turn 3, the cars sweep past the famous casino into Casino Square ending in a short straight.

Sector 2 (Turn 5 to Turn 12) starts with Turn 5, the tight Mirabeau corner that leads to the tighter Fairmont hairpin bend. The double right-hander at Portier takes the cars into the only tunnel on an F1 circuit. The light change going in and coming out of the tunnel is dramatic, while the cars lose 20-30% downforce in the turbulent air in the tunnel. The cars decelerate out of the tunnel into a tight left-right chicane, a scene of many accidents, as is Turn 1. This also offers a rare overtaking spot on the track. A short straight leads to Turn 12 (Tabac).

Sector 3 (Turn 13 to Turn 19) starts with a series of a left-right and right-left chicanes which leads to Turn 14 (Piscine) and past the swimming pool, another unique feature on this circuit. Piscine leads to a short straight, followed by a sharp left leading to the 180 degrees tight turn at Rascasse. From here, a short straight leads into the final Antony Noghes (Turn 19) corner, a tight right-hand corner leading into the start-finish straight.

The drivers have chosen nine or more sets of the hypersoft tyres of the thirteen sets allocated to them. The race is likely to be a one-stop race given the durability of the tyres this season. The track has been resurfaced at a number of locations, which will further reduce tyre degradation. On the lower temperatures at this circuit, most teams will struggle to bring the hypersoft tyres into the right temperature window. 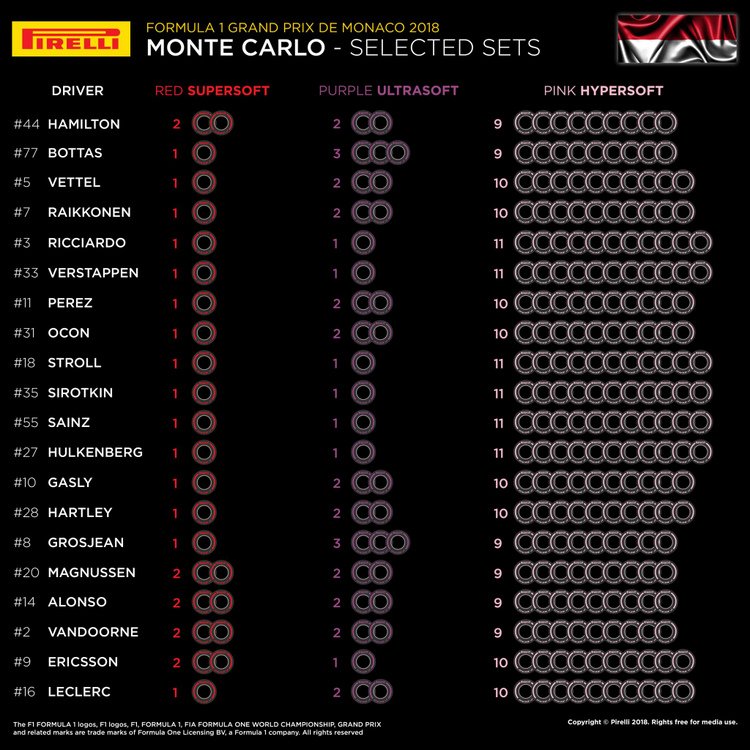 Mercedes (153 pts) has retaken the lead in the constructors’ championship. They lead by 27 points from arch-rival Ferrari (126 pts). Red Bull Racing (80 pts) stays in third position. The Red Bull drivers overcame the shunt in Baku and maximized their points in Spain.

Ferrari was the form team with two wins and three pole positions in four races. But the Italian team has lost momentum in the last two races. Mercedes finished 1-2 at the Spanish GP in qualification and the race.

The Silver Arrows now has two wins in a row. It returns to a venue where it struggled last year. A lot of interest will center on the performance of the team here. Was the Spanish GP a one-off performance based on the altered Pirelli tyres? Or has the team found solutions to the tyre-related problems experienced earlier in the season.

Red Bull Racing will be a significant force on this circuit. The performance of their drivers in the twisty third sector in Spain bodes well for this team at Monaco.

Hamilton (95 pts) leads the title race, by 17 points from Vettel (78 pts). The reigning world champion scored his second win of the season in Spain.

Valtteri Bottas (58 pts) is now third, after he finished second in the last race. Raikkonen (48 pts) is in fourth position. Daniel Ricciardo (47 pts) is fifth in the drivers’ championship.

Mercedes has also struggled on the softer compound tyres this season. The new hypersofts, the softest compound of Pirelli tyres, is the main tyre at this race. The performance of Mercedes and all the teams on this tyre will be watched with interest.

Ferrari and Red Bull Racing go into the race as favorites. Mercedes as a team will try to overcome their problems at Monaco. If this does not happen, Hamilton will be looking at damage limitation and protecting his lead as best as possible.