The Baku City Circuit will host the fourth round of the 2018 Formula 1 season this weekend. The Azerbaijan GP will be held in Baku, the capital of Azerbaijan, for the third time. The race will end the first-leg of flyaway races, as the season returns to Europe with the Spanish GP after this. The country is situated at the crossroads of Asia and Europe. The very first GP held here in 2016 was called the Grand Prix of Europe , before it was rebranded as the Azerbaijan GP in 2017.

Preview of the Azerbaijan Grand Prix

The Baku City Circuit was first added to the F1 calendar in 2016. The inaugural race was won by Nico Rosberg for Mercedes. The host country does not have a great tradition in motorsport. But the first two races around this very tight street circuit has been well-received and thrown up interesting races. The city is dotted by historic landmarks and is called the “City of Winds”.

Mercedes and Red Bull Racing have a win each after the first two races here.

The first race was won by Nico Rosberg with a dominant pole position and race win. His teammate Lewis Hamilton was on the backfoot with a mistake in qualification and a difficult race followed.

The second GP here was won by Daniel Ricciardo. The Australian won a chaotic race starting from tenth on the grid. The race had several Safety Car (SC) periods, as drivers shunted into each other around the narrow circuit.

The flashpoint during the race came between the two championship leaders at that time, Sebastian Vettel and Lewis Hamilton. After a SC restart, Vettel ran into Hamilton the race leader and felt he was brake tested by Hamilton. The German lost his temper and proceeded to swipe the side of Hamilton’s car.

The penalty imposed pushed Vettel to fourth place. Hamilton on the restart after a red flag period was forced to pit because his headrest had come loose. This pushed him to fifth position. As errors and tempers ran high, Ricciardo clinched a miracle win, not unlike his win in the previous race in China this season.

The 6.003 km anti-clockwise Baku City Circuit is a tight street circuit created around the landmarks of Baku. Unlike the twisty street circuits in Monaco and Singapore, the circuit here has long high-speed straights. Overtaking is also possible.

The cars have to be setup for the high speed sections of Sector 1 and 3 which require low downforce and the twisty Sector 2 which requires high downforce. The teams that find the sweet spot in the setups for this technically challenging circuit will perform well. Like all street circuits, the track offers low grip in the first sessions and improves as the track rubbers in.

The track features a series of twenty corners with long straights. The circuit demands a low to medium downforce setup. The brake wear and energy consumption is medium on this second longest track on the F1 calendar.

Sector 1 (Turn 1 to Turn 4) offers good overtaking opportunities at turn 1 and will see the drivers jostling for positions at the start of the race. The sector includes a series of ninety-degree corners connected by straights.

Sector 2 (Turn 5 to Turn 15) is the twisty section which features the extremely narrow section of the track between Turns 8, 9 and 10, with the narrowest section only 7.6 meters wide. This section through the old city passes the distinctive Maiden Tower. The city walls around this section will punish the slightest driver error.

Sector 3 (Turn 16 to Turn 20) features the longest straight of 2 kms leading up to the start-finish line.

There are two DRS zones for the race, with the first DRS zone on the start-finish straight and the second DRS zone on the straight between Turns 2 and 3. The long straights offer good overtaking opportunities. In the first GP here, Rosberg won from pole. In the race last year, Ricciardo showed it was a good track to overtake as he won from tenth place.

Pirelli tyre choices are the purple-striped ultrasoft tyres, red-striped supersoft and yellow-striped soft tyres. The race is likely to be a one stop race in dry conditions. The Ferrari drivers with ten sets of ultrasoft tyres out of the thirteen allocated to them has evidently gone for an aggressive strategy on tyres. The weather conditions forecast is for dry and sunny conditions with the temperatures cooler than last year, as the race is being held two months earlier this season. 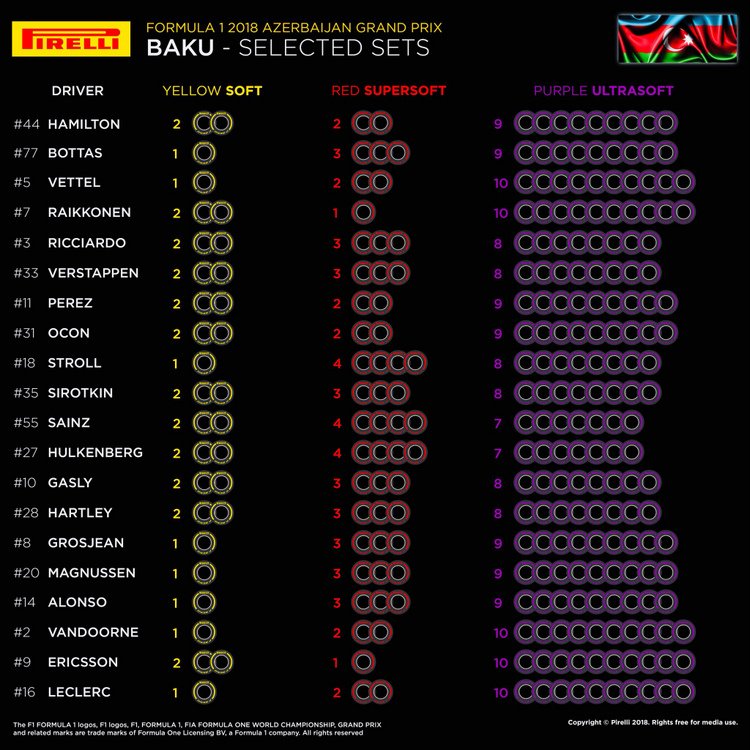 Williams with no points brings up the rear of the field. The Grove-based team returns to a circuit where they performed well last year. Lance Stroll in his rookie year scored a creditable podium.

Sebastian Vettel and Ferrari are in good form with two wins in the first three races. The Maranello-based team is flying high with two front row lockouts in the last two races. For the first time in the hybrid-era, Mercedes is under considerable pressure with no wins after the third race of the season. Red Bull Racing scored a win in China and is a team to be reckoned with.

Vettel (54 pts) leads the drivers’ championship. After his unfortunate accident with Max Verstappen in the last race which dropped him to eighth position, his lead has been cut. The German leads Hamilton (45 pts) by nine points only. The reigning world champion will hope for his first win of the season  here after two poor races.

Valtteri Bottas (40 pts) is in third position after two good races. Ricciardo (37 pts) after the race win in the last race is in fourth position. Raikkonen (30 pts) is in fifth position and rounds out the top 5 in the drivers’ championship.

Vettel with two consecutive poles and two wins in the three races so far is on a high. Hamilton looking for his first win and struggling on the new Pirelli tyres has to up the ante to stay in the title fight. Max Verstappen is the other driver under pressure after a mistake- prone start to the season. Will the dominant team of the hybrid-era fight back after their winless start to the season?

It's three races without a win for @MercedesAMGF1 in 2018