On September 2, 2000, Bob Stoops and his Oklahoma Sooners were in Norman giving the UTEP Miners a beating. While 30 minutes North in Oklahoma City, Oklahoma Jill Mabry was waiting for her doctor to arrive so she could deliver her son. Consequently, the doctor was delayed because he had to finish watching the Sooner game.

Born on a football Saturday night in Oklahoma Cole Mabry, now a linebacker for Army West Point, was destined to love the game.  “I think from the minute I was born, football has always been my first love,” Mabry stated. His first word was ‘UPBALL’ as he was trying to say football.  “My first real football memories are spending Friday nights at the stadium in Tahlequah watching the high school football games. I remember the excitement of the games and looking up to those players.” Mabry continued. 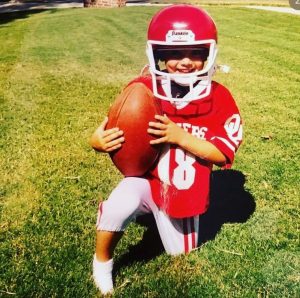 The Mabry family relocated to Iowa City, Iowa shortly before Cole entered third grade.  Tad Mabry, Cole’s dad, teaches pediatric dentistry at The University of Iowa.  While his mom Jill is a former nurse. Cole is the youngest of three. He has two older sisters, Jenna and Anna. Jenna is a nutritionist and dietician in Birmingham, Alabama. His sister Anna is married to a former Navy football player whom she met on Cole’s visit to the Naval Academy.  They live in San Diego. “It is crazy that is how they met. And it can get pretty competitive with us sometimes. It was rough my freshman year when we lost to Navy.  The next year we beat them and he was on the team so it was pretty sweet.”

Mabry’s drive to serve is evident in everything he tackles.  During his time at Iowa City West High School, he won the ‘Teammate of the Year Award’  TWICE. “Through all my sports experiences those two awards are the most meaningful to me.  I think being recognized by your peers as a leader and a good teammate is one of the most powerful things.” Mabry reminisced

Mabry led his team to two state championship games.  Unfortunately, the outcome was not what he wanted.  There is a famous quote by Nelson Mandela  “I never lose. I either win or I learn.” What Mabry learned was how to play football on a bigger stage.  He gives credit where credit is due. “Iowa doesn’t get a lot of recognition for high school football but the coaches I had helped prepare me.  There are teammates of mine and guys I played against that are All-Americans now in many D-1 programs and will go on and play in the NFL.  Being able to compete with and against these guys prepared me extremely well for college football.”  Iowa City High School was the perfect foundation for Mabry and his future at West Point.

“Playing in those state championship games was unbelievable.  It’s hard to top high school football. Playing with all your best friends that you’ve grown up with and having the success to get to play in two state championships with the whole town rallying behind the team was extremely special. It will be hard to top with any college football memory, except maybe the Army/Navy game.” Mabry said with a smile.

Cole has known since he was in junior high that he wanted to do something more with his life.  He wanted to give back and live a life with purpose. When asked why he thought his teammates voted for him for the Teammate of the Year Award it was evident that Mabry has a gift to make everyone around him feel special. It didn’t matter if they were a starter or played on the same side of the ball with him or even what grade they were in he truly cared for each and every one of his teammates.  He took a genuine interest in all of them. Mabry took the time to teach the younger guys the ropes in the weight room.  As well as the guys that were behind him on the depth chart.  He would teach them the position or help them learn the plays.  Mabry took the time to get to know them and their families and to make an effort to include them even if it was just saying hi when passing in the hallways.

Cole was always that kid outside playing with his friends and they were usually playing Army or football.  Which eventually fueled his passion to serve in the military.  “When I was in 8th grade it was about that time that I learned about the service academies.  Learning about these service academies and being able to be in the Army and play football really intrigued me. I visited West Point, The Naval Academy, and The Air Force Academy.  It came down to a lot of prayers and consideration. But it was just clear to me that West Point was the right fit.” Cole recalled.  Ultimately, Mabry decided that he could do it all at West Point, play college football, get a world-class education, and serve his country.

Mabry is the President of West Point’s Fellowship of Christian Athletes program.  That includes all of the sports at West Point.  “I was also the president of FCA in high school and now getting to do it at West Point is a big responsibility but also very humbling and I feel blessed to be able to do that.  I am excited to be able to lead FCA this year.” Mabry said. He is the voice of FCA at West Point.  He leads the weekly meetings. organizes events, and helps each individual sport as needed.

Mabry is also part of the Student Advisory Committee.  This committee helps organize community service events to give back.  There is a football-specific representative who organizes events so the football players can go and serve in the community.  “A couple of weeks ago we went to West Point Elementary School and we were able to read books to some of the kindergartners there it was really neat,” Mabry exclaimed.

Mabry is now in his senior season for the Army Black Knights. He is the Cadet Captain in Company A-2.  Mabry’s leadership position in the Corps of Cadets is the Brigade Deputy S3. “Which basically means I am the second in command of all planning and operations affecting the 4,000 plus Cadets at the Academy. With this position, I get to work with some absolutely fantastic Cadets who make the job extremely easy,” Mabry proclaimed.

Cole’s major is Defense and Strategic Studies, a major that is unique to West Point.  After graduating, he is required to serve five years of active duty.  He is Branch Infantry and will be assigned a post upon graduation.  As for long-term Army goals, Mabry wants to do Army to the fullest.  He has set goals of completing Airborne School, Air Assault School, Ranger School, and Military Free Fall School.  He wants to pass all those schools and if the opportunity presents itself try out for the 75th Ranger Regiment or maybe join the Green Berets. As of now, he is hoping to accomplish all his goals in the next eight years.

“I miss seeing cornfields” Mabry laughed as he spoke about Iowa. “Anytime I see a cornfield out here which isn’t very often it takes me right back home,” It is important to realize that some people have never heard of Iowa and even fewer have ever been to Iowa. “People say the is no reason to go to Iowa. I say that’s the beauty of it there is no reason to go there unless you live there. It is our own little space.” Mabry explained

Mabry doesn’t get much time to go back to Iowa, but when he does he spends time with his dad hunting and fishing.  Every time he is home he reconnects with old friends and they hit up their favorite ‘Friday Night Win’ spot Pancheros Mexican Grill. “I miss the little things that are unique to Iowa City,” said Mabry.

After Mabry accomplishes all his Army goals he wants to settle down into a peaceful life and have a family. “I want to find something that I have the same passion for that I do for the Army.” Expressed Mabry. That is a complete mystery to Mabry, however, there is no doubt that he will be in a profession where he can continue to serve to the best of his ability.

The foundation of faith that he and his sisters were raised on is the root of his values and morals.  As a result, this foundation has given him the calling to serve not only his country but his community no matter where he is.  He is determined to live a bigger life with a purpose.