Anyone think Clemson head coach Dabo Swinney still considers Ohio State to be worthy of no better than the #11 ranking in the country? As Ohio State rips Clemson 49-28 , the Buckeyes qualified to meet Alabama in the national championship game in Miami on the 11th.

If the Rose Bowl was a like heavyweight fight with one team wearing down the other, the Sugar Bowl was more like a boxing match.  Both sides came out early ripping rapid fire punches.

In the end, Ohio State’s offensive line dominating Clemson’s defense was the difference. Buckeyes quarterback Justin Fields overcame his poor performance in last year’s match-up. Running back Trey Sermon was the perfect accent for the Ohio State offense. Fields finished the game 22 of 28 for 385 yards and six touchdowns with one interception. The six touchdown passes is a Sugar Bowl record. And Sermon, the grad transfer from Oklahoma, added 191 yards and one touchdown on 30 carries.

The first quarter was full of both teams throwing their counter punches. Clemson’s Cornell Powell made a spectacular catch along the sideline for 27 yards that put the Tigers down at the Ohio State five-yard line. Two plays later, Trevor Lawrence ran a bootleg to the right side for two yards and a touchdown. In what was probably his last game for Clemson, Lawrence played well enough. He finished the game 33 of 48 for 400 yards, two touchdowns and one interception.

Ohio State answered later in the first quarter. On first and 10, Fields found Sermon in the flat and the running back did the rest, picking up 34 yards to the Clemson 32-yard line. It was Sermon again, this time running over the left guard spot, untouched, 32 yards, into the end zone to tie the game at 7-7.

Clemson re-took the lead on its next possession. Running back Travis Etienne ran up the middle for three yards for a score. It is also likely his last game at Clemson. The one-time Heisman candidate may have finished his college career with only 32 yards and one touchdown on 10 carries in the Sugar Bowl. The drive took only 2:26 and like the other possessions in the quarter was a mix of quick hit throws and fast burst runs.

Ohio State had another counter punch. Fields found Garrett Wilson behind two Clemson defensive backs and they connected for 46 yards to the Tigers’ eight-yard line. On third and goal, Fields fired into a crowded end zone and found the 6-6 tight end Luke Farrell standing above the crowd for the catch. The game was tied at 14-14 at the end of the first quarter. That was the last time it was close.

Ohio State outscored Clemson 21-0 in the second quarter and never looked back.

From the Clemson 17-yard line, Fields was backpedaling in the pocket. He found Jeremy Ruckert all alone in the end zone for the touchdown and the 21-14 Ohio State lead. At this point, it was clear that part of the offensive passing scheme for Ohio State was to go right at defensive back Tyler Venables. He of course is the son of defensive coordinator Brent Venables.

Clemson went three and out on its next drive. Ohio State’s answer told you everything you would need to know about how Fields was going to perform Friday night. He scrambled up the middle for 11 yards and was plastered in the mid-section by Clemson linebacker James Skalski. Fields was flat on the ground. Skalski got ejected for lowering his head and leading with the crown of his helmet. Fields winced in pain as he got help walking off the field. He was gone for exactly one play. He came to roll to his right and arm whip the pass to Chris Olave for a nine-yard touchdown pass. Fields was clearly in pain on the sideline as the team physicians checked him out, but he fought through it and stayed in the rest of the way. 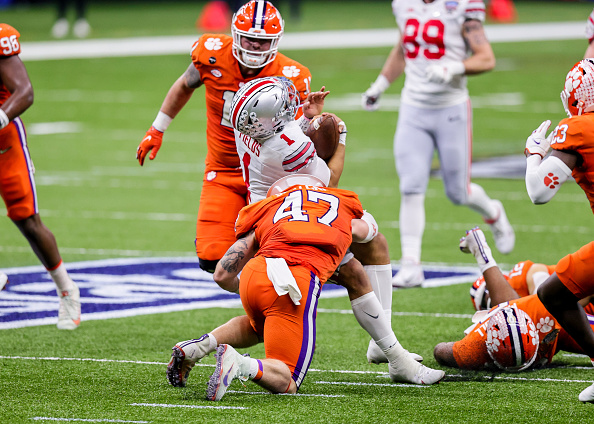 In fact, Clemson managed only four plays on its next possession. That gave Fields a chance for his fourth touchdown pass of the half. He ripped a throw on a line through double coverage to Ruckert for a 12-yard touchdown pass and a 35-14 lead at the end of the first half. Fields finished the half, bruised midsection, and all, 16 of 18 for 223 yards and four touchdowns with no interceptions. Ohio State had outgained Clemson 394 yards to 201 in the half. The offensive line for the Buckeyes was dominating Clemson’s front seven in a way that rarely happens.

The two teams traded one touchdown a piece in the third quarter. Clemson struck first. Lawrence drove the Tigers 70 yards in just eight plays. He went five for six passing on the possession, including a 10-yard touchdown pass to Powell. The OSU lead was down 35-21

But down by as much as they were, trading touchdowns was not going to be enough for Clemson. Ohio State needed only seven plays to go 91 yards. Fields stepped into his throw and found Olave wide open inside the five-yard line and made a picture-perfect 56 yard pass for the touchdown. The Buckeyes lead was back up to 21 points with only four minutes left in the third quarter.

Clemson Has No Answer For Ohio State Offense

The lead grew to 28 points in the fourth quarter. When Clemson had one of its several possessions of fewer than six plays, the Buckeyes pounced. Fields completed a 45-yard pass to Jameson Williams for a touchdown and a 49-21 lead.

Clemson scored once more. But as if to rub salt into a gaping wound, as the Tigers were trying to put together a last gasp comeback, with the score 49-28 Ohio State, Lawrence was picked off in the end zone by Sevyn Banks.

In the postgame press conference, Swinney said he did not believe his ranking of Ohio State at #11 gave the Buckeyes any extra motivation. “I said they were good enough to beat us and good enough to win the whole thing. I didn’t think anyone that didn’t play at least nine games, in my poll, I wasn’t going to put them in the top 10.”

Fields admitted that the hit by Skalski was, “killing me.” He said he never considered sitting out the game despite the pain. Ohio State head coach Ryan Day said of his quarterback’s performance, “I knew he was tough. I just asked, ‘Can you do it,’ and he said yes and we went from there.” He said with all the questions about whether Ohio State even should have been in the playoffs, “This was big for us. This was a statement for us as a program.”