The season has gone from one of great potential to one of trying to hold it together. Losses are losses. But the thumping that SMU took Saturday at East Carolina has the Mustangs trying to keep their grip on what is left of the 2020 season.

Down 45-7 at halftime, SMU did outscore the Pirates 31-7 in the second half, but it was far too little and way too late. The 52-38 loss put the Mustangs at 7-3 overall and 4-3 in AAC play going into this week’s rescheduled game against Houston.

Mustangs Trying To Keep Their Grip

With any coach, there is the post-game analysis and the reassessment when they have had time to sit and watch the game film. The time lapse did not help things look better for SMU head coach Sonny Dykes this week. “I actually thought the first half was actually worse than I thought it was, you know, just being truthful,” Dykes said this week. “The second half was about what I expected. I expected it (the game film) to not be good, but it was probably worse.”

It is probably one of those game films coaches would rather burn. But lessons have to be learned from it and teaching has to go on as the Mustangs try to keep a hold on a significant bowl game. So, what was the overall takeaway? “Things just snowballed and got out of control. And we didn’t do a good job of somehow getting it stopped.

Not Enough Time Away?

How does the week get approached then in terms of pulling the team back together? Dykes said there are self-created obstacles. In an effort to keep the team in a bubble in the COVID era, they have not had back to back days off since August. Dykes cited the outbreaks that happen on teams when they have a bye week, or an extended time off. The players go home or have more free time on their hands. Often the result is an ensuing COVID outbreak on the team.

Dykes said SMU has had three players test positive since September and the program is pleased with the way they have protected the team. But he said, it has come at a cost on the field. “I think everybody is probably a little bit mentally exhausted. Having that approach, it’s been a bit of grind. It’s been a grind for coaches. It’s been a grind for players. I think it has been more mental than physical.” Dykes said the methods to keep everyone COVID-free has, “worn everybody down a little bit.”

SMU got beat in the second half of the Tulsa game two weeks prior to the ECU debacle and then came out flat in the first half in Greenville last week. That is four quarters of struggling to stay in the game, prior to the signs of life in the second half last weekend. Consistency over the course of game has been a challenge for the Mustangs all season long. But now it overlapped into multiple games. Dykes said he is confident his team can rally to the last game of the regular season at home against Houston. “I think our guys have a pretty clear understanding of what is going to happen moving forward in our program.”

Dykes said an important factor was that there was some, “Relief in sight.” That being the end of the regular season Saturday. That will give the team time off as they will not be playing in the conference championship game and will be awaiting its bowl bid. The challenge then becomes maintaining that protective bubble for the health of the players.

Before that break, comes the Houston Cougars. Because of COVID postponements and cancellations, they have only played six games and are 3-3. Their fortunes rest on the arm of quarterback Clayton Tune. The junior started the back half of the season last year. This season his stats don’t measure up to quarterbacks who have not had so many stops and starts to their season. Still, Dykes is impressed with him. “Every single game you can see him improve. The ball is coming out faster. You can see the pieces start to fit together,” Dykes said.

Is This It In Dallas For Buechele?

Saturday could also be the last home game for quarterback Shane Buechele. With the oddities of this season, the NCAA has made it a “freebie.” No one is using up a year of eligibility this season, per NCAA mandates. That means there will be some sixth-year players next season. Buechele could be one of them. The transfer from Texas played three years in Austin before transferring to SMU prior to the 2019 season. He threw for 3,929 yards and 34 touchdowns, which led the AAC. He averaged a little over 302 passing yards per game which also led the conference. 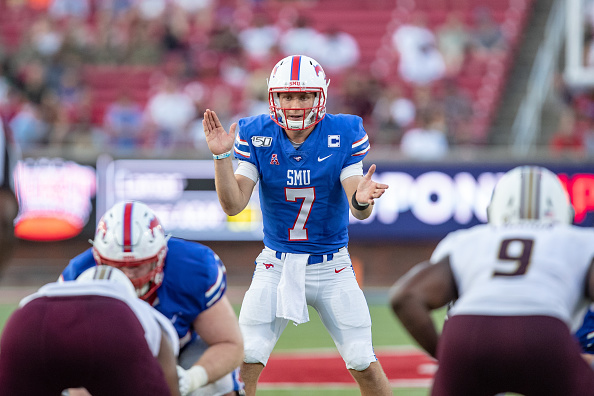 Expectations were high going into the 2020 season. His numbers, much like those of the entire team, have been anything from really good to pedestrian. His in-game completion percentage has been as high as 82% (against Navy), and as low as 52% (against Cincinnati). Likewise, he has thrown for as much as 367 yards in a game and as little as 141. We exchanged messages with two NFL scouting services. Their feedback on Buechele was that this season has not done as much to help his draft stock as they would have expected. He was praised for his leadership and his ability to run an offense. The biggest knocks were his speed in leaving the pocket and his inconsistency.

No one wants to project which players will take a sixth year with the NCAA freebie. We asked the services to evaluate where Buechele would go if he came out now. Both said he was a mid-round pick to a team that needed a serviceable back-up.

But his legacy at SMU cannot be denied. He has become the face of the program. Literally. Billboards donning his image can be seen throughout the Metroplex area. He has been the focal point of Dykes’ rebuilding of the programming. “It’s hard to put into words really what he meant to our program,” Dykes said. SMU has been pulling transfers in from schools all around the country for the past three years. Buechele was the biggest get for Dykes. “Just coming in and settling guys down and giving us some confidence.” Dykes touted Buechele’s, “desire, and work, and leadership, and stability, and maturity. He has all those characteristics that make everyone around him better.”