That was the question going into the game. Up to Saturday, Vanderbilt had looked like a good, old-fashioned run-first team. In other words, they looked like the traditional Alabama team. In fact, with a heavy emphasis on running the ball, Vandy had looked like what most fans want Alabama to look more like this year. No question that coach Lane Kiffin produced some great offensive results. But many believe that Alabama’s defense suffered because of too much time on the field, and that an over-emphasis on passing and Run-Pass-Option plays were not in the best interest for the Crimson Tide.

Enter new offensive coordinator Brian Daboll. Early and often, Daboll gave fans exactly what they wanted. Both Damien Harris and Bo Scarbrough dominated the first half. Indeed after two plays in the second half, Harris had a career high in rushing yards and a rushing average of 13.5 per play.

As part of the “Process”, Coach Saban always discusses the importance of playing a “complete game”. Not only does this refer to playing hard all 60 minutes, it also emphasizes the importance of maximizing potential in all 3 areas: offense, defense, and special teams. In special teams, not too much was asked of kicker Andy Pappanastos or punter/kick-off man J.K. Scott. The only slip-up came when punt-returner Trevon Diggs fumbled and recovered his own muffed punt.

From an offensive standpoint, it bears repeating that Coach Daboll really had a coming out party. Seeing the dominance of the run game set up Jalen for some beautiful, accurate passes to Cam Sims and Calvin Ridley was a sight for sore eyes. In fact, there were no jet sweeps or RPO’s in the whole game — a huge departure from philosophy of Lane Kiffin who wanted Bama’s offense to spread the ball around the field. The dominance of the run game is of course also a product of great O-Line play. Accordingly, Najee Harris had some great minutes in the first half as well. And with linebackers Rashaan Evans and Anfernee Jennings back after dealing with injuries, each facet of the defense played absolutely fantastic. The complete dominance of the first half was reflected in halftime score of 31-0. 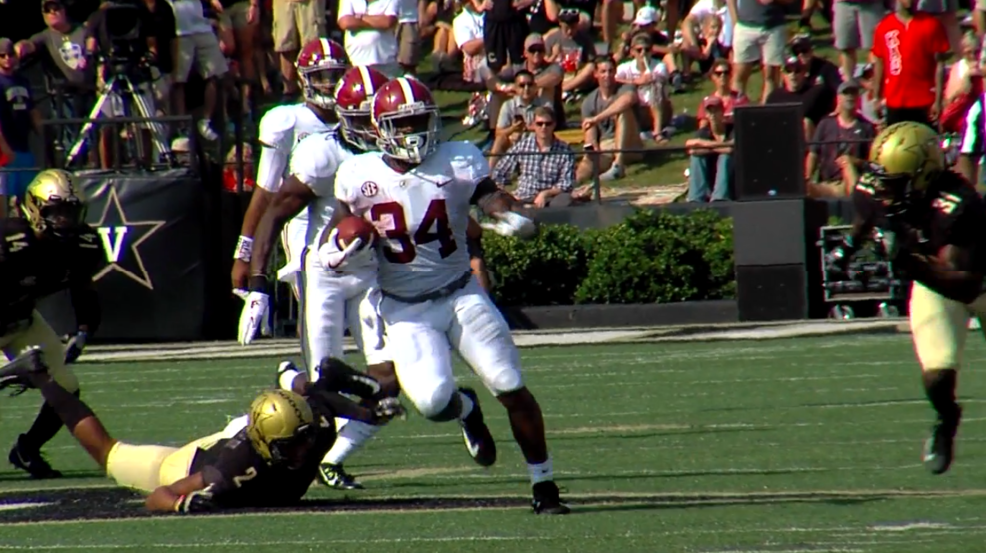 The second half was more of the same, just with different names on the back of the jerseys. Alabama came out dominant and scored an immediate touchdown bringing the score to 38-0. It was then, with over 10 minutes left in the 3rd that Tua Tagovailoa entered the game. After that, it became the Tua Show for the rest of the game.

With names like Tua, Devonta Smith, Jerry Jeudy, Najee Harris, Mack Wilson and others making up the majority of talking points during the second half, most of the accomplishments of these new players will be examined in the final article of a 3 Part Series on UA freshman and sophomores that will make a huge impact on this season.