Atlanta United Throw Away Two-Goal Lead in Draw With Nashville

In front of a 40,748-strong crowd in full voice at Mercedes-Benz Stadium, the Five Stripes put in a performance full of intent and intensity. Goals from Marcelino Moreno and Erik Lopez put Atlanta 2-0 up, but a late Hany Mukhtar brace ensured Gabriel Heinze’s side went home frustrated with just a single point.

Here are three things we learned from the match:

For all his brilliance defensively, Miles Robinson is often criticized for a perceived lack of passing ability. But anyone who has watched the United States international over the past few years knows that criticism is incredibly unfair and on Saturday, he showed us why.

It was Robinson’s pinpoint long pass behind the Nashville defense that set up Moreno’s opening goal after just six minutes for his first-ever MLS assist. And that was just one of 10 long passes the 24-year-old attempted on the day, completing seven of them.

Robinson’s pass map below shows just how impressive his long-range passing was on Saturday but it’s also important to note that he was excellent in tight spaces, too. 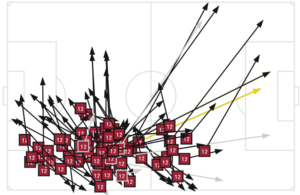 The center-back was rarely flustered when pressed by Nashville, quickly distributing the ball into the likes of Santiago Sosa and Emerson Hyndman to get Atlanta moving up the pitch efficiently. To say he’ll be frustrated by his side’s late collapse would be a massive understatement.

If his ball-playing was the one thing holding Robinson back from a move to Europe, this might well be his last season in Major League Soccer. Enjoy it while it lasts.

When Marcelino Moreno arrived at Atlanta United last year, it was inevitable that he’d be compared to Miguel Almiron. After all, this was a South American central midfielder, signed from Lanus, with expertise in carrying the ball forward in transition.

The only problem has been that, with the exception of a few early glimpses, we’ve hardly seen Moreno do the job he was signed for. A large part of that has been due to Heinze starting him out wide, where he has to front up full-backs who are often faster than him, rather than simply bulldozing his way through the middle.

But on Saturday, Moreno was unleashed centrally. The 25-year-old made a great late run from midfield to get on the end of Robinson’s pass for his opening goal. Then, after the break, Moreno picked up the ball deep inside his own half and charged straight through the heart of Nashville’s midfield, distributing wide to George Bello who delivered the cross for Lopez’s first-ever Atlanta United goal.

That charge through the midfield from Marcelino Moreno for the goal is EXACTLY why he was signed!

Congrats to Erik Lopez on his first #ATLUTD goal too 🇵🇾

Two huge, match-defining contributions. And two actions that perfectly encapsulate what Moreno can offer to this side when deployed in the right spot.

By the time he was withdrawn in the 69th minute, Moreno had completed a match-high three dribbles while enjoying a 90% pass completion rate. He has to be played centrally moving forwards.

Given just how good Atlanta United were for 80 minutes of this match, pressing hard and playing some scintillating soccer, they’ll be kicking themselves for only managing a draw.

A Five Stripes side that has been so strong defensively this season were undone by disorganization in the final 10 minutes, with Hany Mukhtar helping himself to a late brace.

For his first, Mukhtar was far too easily able to beat Brooks Lennon to the ball before firing home from the edge of the box. For his second, the German found himself wide open at the far post after two Atlanta defenders had been drawn toward a Matt LaGrassa shot. The ball unfortunately rebounded off Robinson and right into the path of Mukhtar.

It’s ironic that Atlanta collapsed in this fashion after they’d ended Nashville’s 413-minute shutout streak early in the first half. After seemingly solving the issues in the final third, Heinze must now go back and reaffirm his defensive principles.