After two rounds of RWC playoff qualification matches completed, two out of the four sides in this knockout tournament remain; the USA Eagles and Portugal. And one last game is scheduled for  Friday, November 18.

Qualification for the 2023 Rugby World Cup (RWC) is limited to 24 sides, and just one place remains in Pool C. Set to compete against Wales, Australia, Fiji, and Georgia, it will be a fine place for either team from Europe or the Americas, to affirm the side’s reputation. 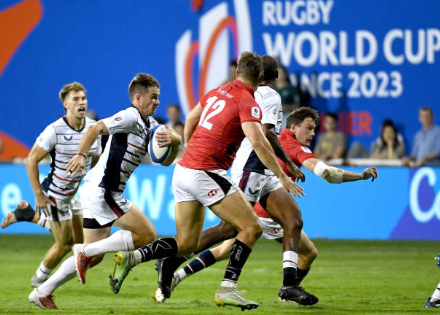 The Os Lobos (Portugal) have appeared at just a single event [to date]. Their 2007 RWC record was a solid one, with tries/points scored in each pool game and a conciliatory losing bonus point against Romania showing potential. Yet they have struggled to re-enter the global tournament, as others in Europe have shown more consistency.

No matter the odds or predictions, every team competing in such a knockout fixture is emboldened to play ‘outside of their skin’. And many expect the challenge from Portugal to be immense when the sides face off in Dubai on Friday.

With their 49-7 victory over Hong Kong, the USA Eagles will be confident when preparing for this RWC playoff qualification match. The last two games gave them fine warm-up conditions that they are ‘one step closer’ to the objective. “I’m happy with where we are at the moment. I think we’re improving in certain areas, but we’ve got our work cut out for us next weekend, that’s for sure,” Gary Gold, the Eagles head coach said.

“We’re creating so many opportunities, but we’re just not finishing them off. Whether it’s deciding to keep the ball in hand or being more clinical at the line out, we’ll need to take more advantage of our opportunities next week.”

Opposing them, Portugal seemed to be trending a lot better, with their comfortable 85-0 win against Kenya showing that this next match will be difficult for the American men.

The Portuguese will have plenty of motivation, and some good support too. Friends, families, and supporters might be the key advantage, as well as more regular play in the last few months. Their rivals had ended Major League Rugby competition in July, so with Portugal still providing constant club and representative rugby fixtures leading into the qualification tournament, it might hold Os Lobos in good stead.

No matter who might be favoured, it will be a challenging occasion where the best team on the day will progress to the 2023 Rugby World Cup in France.