In the calendar year, reports and analysis are due and with consideration of the NZ Rugby 2021 season, you would be correct in classifying it as ‘some good, some bad’.

Unsettled yes. Disastrous, No. That isn’t accurate. Three losses for the national team yes – both men’s and the women’s Black Ferns disappointed. Each had an end-of-year to forget. There were as many positives though, with Gold for the women’s rugby sevens squad, the Crusaders dominating domestically, and the Blues claiming a title for the longest time. Add that to the record commercial revenue streams brought on board [see lower].

All good. Yet with internal reports, stakeholder consternation, and even the suggestion of a player breaking down due to mental health and unfavourable inter-personnel relationships, how can it not be seen as ‘troubled’. Though if every review was negative, nobody would read or enjoy them. And rugby is a game that needs positive results on the field that is naturally followed by a positive reaction from the fans. NZ (New Zealand) Rugby has to agree, the calendar was not one to frame or hand out plaudits yet, with many star players re-signing with the union, the future is still bright downunder.

In this and many other final wraps of the season within Last Word on Rugby, our team of contributors would like to show as much love and dissection, as one can show honesty and awareness.

The winners over the NZ Rugby 2021 year should be publicized first. It’s fitting that ‘wins and losses’ can be counted – but the W comes before the L-word. So let’s look at how well individuals and teams performed.

This is not a simple list of prize winners from the New Zealand Rugby awards, or International praise. The reason to list names and teams is a compliment to them, to their contributions, and the hard work that all rugby/rugby league players put in over the year.

Men’s player of the year – Will Jordan. When your try-scoring ratio is so high, your individual skills are highlighted naturally yet Jordan was also support player and offered try assists to his Crusaders and All Blacks teammates. Some call him the ‘Magic Man’ and his breakthrough player of the year gong at the World Rugby Awards was credit to a player who has gone from warming the bench, to being the starting right winger for the All Blacks.

Women’s player of the year – Ruby Tui. Whether in person, on-camera, or commentating from the sidelines, Ruby has the overall qualities that impress. A classy rugby sevens player, she capped off a resurgent four-year cycle from Rio to the postponed 2020 Tokyo Olympic Games. Gold was her reward and she gained many fans for her vibrant personality and infectious humour – something the game needs more of!!

Team of the year – Taranaki. Unbeatable in 2021, the fact they were not judged so in the NZ Rugby 2021 awards ceremony was a crime although the union is humble in their accomplishments. Winning the NPC Championship, some say they would have won the Premiership final if allowed, they were that good. Head coach Neil Barnes can take his confidence up to the Chiefs franchise in [any] Super Rugby competition for 2022.

In terms of rugby administrators, in a favourable move for women’s representative, the Auckland Rugby Union elected as President, former Black Ferns and Rugby World Cup winning-skipper, Fiao’o Faamausili. Great recognition for the role that female stakeholders play in the game [right across history] and more influence that her, and others like Dr Farah Palmer, now hold in NZ Rugby 2021.

In memorial: Sean Wainui. The passing of this current Super Rugby and Maori All Blacks representative struck a chord for all the wrong reasons. The reasons why are to one side, as the thoughts of rugby supporters all around the globe towards his wife and whanau. It highlighted the modern concerns of player welfare, with mental health and support structures now becoming forefront to the battle to be fit in body and mind.

To quote NZ Rugby CEO Mark Robinson; “New Zealand Rugby would like to congratulate all those who have once again illustrated the quality and diversity that make up the rugby community. COVID-19 has thrown up plenty of challenges for us all, so it’s been inspiring to watch players and teams push through that adversity and chase their goals in 2021.

“It’s important to celebrate and acknowledge the contribution of the players, volunteers, coaches, and referees who continue to make the rugby such a vibrant and central part of Aotearoa’s sporting landscape.”

NZ Rugby 2021 had some Good, some Bad, in an unsettled year

An unsettled calendar with regard to the ongoing interruption from the global pandemic. It directly affected every rugby-playing nation. At times, matches were filled to capacity with fans shoulder to shoulder, though it ended with limitations and Lockdown’s across the country – they even removed Auckland regional sides from the NPC and Farah Palmer Cup action.

So by comparison, there was plenty of good. Club rugby had a full season to enjoy. The grassroots of the game is accessible to every boy or girl, every man, and woman who still wishes to participate. No Silverlake investment deal will remove that solid base even though financial support is always welcomed, the terms and conditions have to be agreeable to all stakeholders. An example of that is the INEOS sponsorship deal. Bringing in record earnings from the black jersey, others have called the choice is impersonal and unrelated to the values of the game in New Zealand.

Out on the field though, it’s skill vs skill, always a group effort and new guidelines in 2022 will help to promote games. Administrators will have the ability to change the number of players and field size, to suit the needs and wants of those involved – not solely for those at the top of the pyramid.

There is good to be found around the country, and bad due to some results and outcomes by the national side. Singularly, it narrows the focus primarily on outcomes but doesn’t represent how planners had to adapt and pivot. The year began with NZ Rugby needing to adapt when Super Rugby was again reduced down to the singular Aotearoa competition – five franchises playing repeated local derby games again. Once promoted as the best domestic matches once or in alternate seasons, the Crusaders played as well as they naturally have done, winning five successive years of Super Rugby domination.

Finally, with the borders open, sides could travel to Australia, and a Trans-Tasman competition began the week after Queensland had won the Australian contest. Having to travel immediately, the Reds lost too many games to display their threat, and the Blues had success away from home that permitted them to reach a Super Rugby final for the first time in years. Their victory over the Highlanders earned the region a trophy. No Aussie teams performed to the highest standard, so in 2022 they will need to make vast improvements to compete with the Kiwi sides.

🏆💙 @BluesRugbyTeam are 2021 Sky Super Rugby Trans-Tasman Champions! Their first title in 1️⃣ 8️⃣ years! Where you at, Blues fans? 😜 pic.twitter.com/6N9RXnUBDj

There were wins over Tonga and Samoa, though the challenge of not having a June Test series of substance did foretell that this season was never going to go as planned. 15 tests were scheduled, and even bringing Australia over the Tasman involved a quarantine period. Allowed to train while in isolation, it allowed for two Bledisloe Cup matches to be played at Eden Park though travel restrictions and a forced change to The Rugby Championship schedule robbed Dunedin of hosting the 100th anniversary game between New Zealand and South Africa. That match was played in Townsville of all places but, was still a triumph over the impact of the Delta variant.

Rugby learnings from 2021 – Adapt and Pivot

If this year showed anything, it was the need to pivot. To analyze the conditions and adapt to, and with them. So when the All Blacks left for Australia, they could not return home [or they would have to be quarantined for 14 days] so entailed a rugby tour that lasted for three months! The Black Ferns also had to make sacrifices; with players removed from the Farah Palmer Cup final, to be as prepared as possible. 2021 might be remembered for ‘more time for training than in practice’ and the women were nowhere near prepared to face England. They were walloped twice by the Red Roses, and France then continued the beatings that make hosting the Rugby World Cup in New Zealand next year, the biggest test ever for the women’s national side. 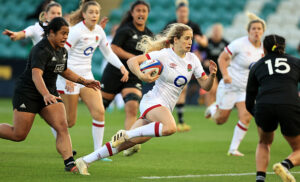 Losses to South Africa and the two poor showings against Ireland and France will be exposed in a (soon to be released) report. NZ Rugby 2021 is being examined in detail, as many are unhappy and concerned with the state of the game. Balanced by positive results and retaining the Bledisloe Cup and Rugby Championship, there is work to be done. It’s an A- scorecard, or a B+ if you are focused more so on ‘some bad rather than some good’. Yet for a nation where rugby is the national sport, it is self-analysis that involves fans and followers around the world.

What they must all remember first is, that when a try is scored or a big tackle is made, it is the game we celebrate. And gladly there is still more success than failure over this calendar year. Let’s hope that the impact on 2022 by Omicron and Covid-19 can be adapted to, and ‘fended off’ so it does not reduce any more games than can be afforded.