The Springbok end of year tour kicks off on Saturday against Scotland. Much has been said of the conservative selection, but Jacques Neinaber has opted for continuity.

Which regular Springboks were not selected?

The omissions from Nienaber’s squad were all injury-enforced. Faf de Klerk (hip flexor), Cheslin Kolbe (knee), Frans Malherbe (neck), Pieter-Steph du Toit (shoulder) and RG Snyman (knee) won’t appear in Europe this year. Unfortunately for the Springboks, all but one are regular starters. However, this does present Nienaber with the opportunity to test his squad depth. The next player in line needs to step up and prove their worth.

There are only two newcomers in the Springbok end of year tour squad. Scrumhalf Grant Williams was part of the Springboks extended Rugby Championship squad but had no game time. We don’t really see this changing in November and he is likely to remain a backup to Herschel Jantjies and Cobus Reinach.

Lock Salmaan Moerat joins the squad for the first time. Aside from being a quality lock forward, Moerat is an acknowledged leader. He has captained the SA Schools team as well as the Junior Springboks. He is currently co-captain of the Stormers in the United Rugby Championship. He may have a chance of getting some game time to blood him into international rugby.

What to expect of the Springboks end of year tour

The squad selection points to no real change in the way the Springboks will approach the tour. It is unlikely that many of the players outside of the usual selections will get meaningful game time. This is despite the local clamouring for more young players to be blooded. Jacques Nienaber is working to a plan. That plan is focused on Rugby World Cup 2023 and there will be very little experimentation with playing resources on the cards.

Many may disagree, but the Springboks are capable of a game that involves more than box-kicking, defence and the driving maul. They became mired in very basic rugby during the British and Irish Lions tour. After that a tired squad. both mentally and emotionally, toiled away to defeat Argentina in two Tests in South Africa. They moved on to Australia on lost twice to their hosts. They then went on to lose one Test and win one Test against the All Blacks.

There were a few glimpses of some creative play, but nowhere near enough. It didn’t help that the Springboks play-makers, most notably Willie le Roux, seemed out of form and lacked confidence. This is something that will not last forever. Le Roux’s contribution to the Springboks attacking play is very underrated. The short break between the Rugby Championship and the Springbok end of year tour might just be the break Le Roux needed to refresh himself and to find some form.

Nienaber announced his Springbok team to face Wales in Cardiff on Saturday. He has opted to give Willie le Roux an extended break and the fullback jersey will be worn by Damian Willemse. This gives Willemse the perfect opportunity to show he is ready to be considered as a viable option to take care of fullback duties as well as to cover the roving attacking option that Le Roux offers. His experience at flyhalf should prove of value in order to fulfil that role. Sbu Nkosi has had issues getting a visa to join the rest of the squad in the UK and his right wing berth is filled by Jessie Kriel. In an injury-enforced change at scrumhalf, Herschel Jantjies takes over from Faf de Klerk, with Cobus Reinach coming onto the bench. Neinaber has also opted against the six/two split on the bench and has gone with a five/three split.

For those who have not seen it, the Springboks will be wearing this shirt pre-match in all three of their tour games. 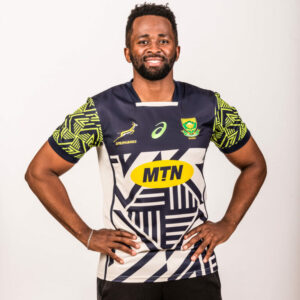