The  United Rugby Championship saw round four completed this weekend. The South African teams haven’t set the competition alight but, have started to settle into their new environment.

Many unrealistic South African fans thought that their teams would walk in and dominate the competition. Aside from the Lions win in the first round, the early rounds saw little to cheer about. The mood turned from brave confidence to uncertainty. It wasn’t if this scenario was unexpected though.

Aside from competing in a new competition, playing under new conditions, the South African teams really struggled with how the competition’s referees officiated the game. Mistakes have been made and interpretations very different from what they have been used to. All four of the South African teams were on tour at the same time, with the takings being 4 wins, 1 draw, and 11 losses.

It wouldn’t be unfair to say that the refereeing standard in the United Rugby Championship has been extremely poor and not befitting a professional international competition. Referees and their assistants will make mistakes and we need to accept that. What cannot be accepted is when a combination of four-match officials make mistakes and miss so much in a game. It is even more inexcusable if the majority of those errors have been in favour of the home teams; Tries being awarded despite being grounded short. Off-side lines not being policed and players joining the ruck from whichever side they choose to.

Referee Ben Whithouse’s performance with the whistle during the Cardiff vs Vodacom Bulls match on Saturday was a disaster. Aside from the continuous issue of blowing the South African teams out of the water at the offside line and for ruck entry, there was a much more curious problem on display. Whitehouse seemed to be blowing the game at two different paces. His expectation was for the Bulls to release the ball immediately after being tackled or to roll out of the tackle area instantaneously. The Cardiff players were afforded much more time to comply.

There are two very simple examples of how the ruck was officiated differently:

Embrose Papier was tackled and tried to place the ball to his right. There was a burly Cardiff Blues leg in the way, so he placed it to his left. Penalty Blues. On the other end of the scale, we have the turnover that Bismark du Plessis won. Du Plessis was locked on the ball and was not being budged. Whitehouse stood waiting without awarding the penalty. It seemed he was waiting for a Blues player to clear Du Plessis off the ball and only awarded the penalty because that didn’t happen.

Bulls head coach Jake White picked up that his team was struggling to understand how the Northern Hemisphere referees managed the game, especially at the breakdown. He pulled in South African referee Tappe Henning to guide his team. Henning has been working with referees in the UK for a number of years. This certainly helped his team to understand Northern Hemisphere law interpretations but did nothing to address the quality of officiating.

It is worthy to note that White arranged for Henning to help his former team, the Sharks, with the same information session when they were in Cardiff at the same time.

It would be one thing if it was just a bunch of sour South African fans who were unhappy. The reality though is that, unhappiness is starting to raise its head in Ireland and Wales. It is incomprehensible that the United Rugby Championship, a competition with the opportunity to raise its profile, has let itself down by not having some form of High-Performance Manager overseeing refereeing performance. There are two issues with this.

Firstly, referees are not accountable for how they officiate. And secondly, the competition has no chance of providing teams with consistent officiating if there isn’t someone directing the referees. This has to be considered a serious oversight.

The first four games were played away

It is unusual that all four South African teams were touring at the same time, but scheduling the tournament during a pandemic with South Africa’s then red-listing dictated this. What this did mean was that there was no soft parachute into the competition with a run of home games. The South African teams were introduced to the United Rugby Championship in the toughest way possible. To their credit, they have worked hard to adapt to their new international home.

The good news for the South African teams is that they won’t be playing their ‘home’ games in Italy. On Friday it was announced that these games will now take place in South Africa. For those looking for the full United Rugby Championship match schedule, it can be viewed here. What is of interest to us though, are the games highlighted below. 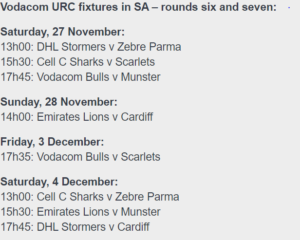 It is the home games that will help the South African teams settle into the competition. Some of the local players might have stretched their eyes at some of the fixtures. The tourists may do the same when they experience the conditions that are expected. The Sharks games against the Scarlets and Zebre should be a challenge for both teams. Although not at challenging as February and March might be, the heat and humidity will still be a factor.

Certainly, the heat and thunderstorms may challenge touring teams to the Highveld, let alone the altitude. It might be a little early, but teams visiting Cape Town might be surprised if they encounter a matchday with temperatures of around 40′ degrees Celcius.

In this analysis of the United Rugby Championship 2021/22, it has not been an easy entry into the competition although the South African teams will ‘eventually settle’ and be more than competitive. Don’t be surprised if they go through the same tough learning process when their teams start qualifying for the Champions Cup.