For the first time in two seasons, the full complement of competing nations will be represented when The Rugby Championship 2021 was revealed last week.

Including South Africa – who could not travel in 2020, due to Coronavirus restrictions – the current World Champions will again face their famous foes from the Southern Hemisphere. New Zealand and Australia will host the majority of fixtures, while the opening pair of games are to be played in South Africa.

This year the tournament reverts back to its 12-match, four nations format. However, the match schedule has been amended to accommodate the ongoing effects of the pandemic, including continued international travel restrictions and government quarantine protocols that exist within the member union territories.

Note: International travel between South Africa and both New Zealand and Australia, has restrictions and compulsory quarantine for any inbound sports team. Meaning the Springboks and Pumas will have to abide by the ‘14-day managed isolation‘ period. Trans-Tasman travel is permitted within the ‘bubble’ afforded cross border travel; within the permissions of State/International borders.

SANZAAR chief executive officer, Brendan Morris, stated, “We have worked tirelessly with the National Unions through the continued difficulties associated with the pandemic. This includes ongoing international border travel restrictions, quarantine protocols, and player welfare concerns. Therefore, we have been unable to roll out the previously agreed mini-tour format as we simply cannot play matches in Argentina at present due to the impact of the pandemic.”

While there is a disappointment from that aspect, it is overwhelmed by the united sense of delight fans across all four nations. Those sentiments are echoed by key stakeholders, as the full Rugby Championship 2021 was revealed.

Since the Rugby World Cup, the Springboks have been encamped on home soil; with no opportunities to compete. In 2021, that is all about to be corrected. Firstly, with a trendsetting internal tour by the British and Irish Lions. Ending the nation’s isolation [provided all measures are maintained] the Three-Test series will provide South Africa with a solid basis on which to attack The Rugby Championship in August.

It follows Test appearances for Australia v France, Argentina v Wales/Romania, and New Zealand v Tonga/Fiji. All worthy opposition, and with preparation, each has to be ready for their match schedules. 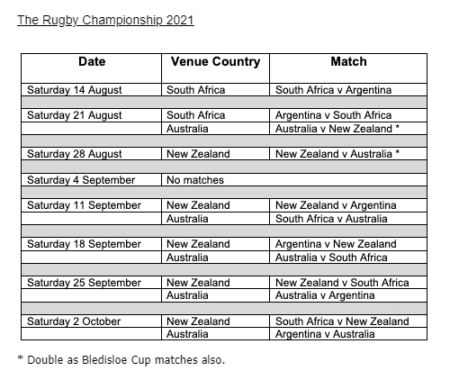 Stretched across the dates is one monumental occasion. The first of the back-to-back Tests against South Africa at Forsyth Barr Stadium, Dunedin on Saturday, September 25 will be an extra special occasion – it will be the 100th Test match between the two famous foes. Even more significantly, it will be played in the 100th year anniversary of New Zealand and South Africa’s rich rugby history [in the same city as that first-ever Test. (Played at Carisbrook on 13 August 1921, the All Blacks won 13-5).

The number of individual encounters each matter. Inclusive of the Bledisloe Cup fixtures, as well as Los Pumas wishing to follow on from their stellar mark set in 2020, with that nation’s first-ever win against the All Blacks.

The match venues and kick-off times will be announced in due course.