With the recent news that the Lions tour will go ahead, let’s take a look at the fly-half position, paying particular attention to Finn Russell. He is one of a band of maverick outside halves who can entertain and perplex in equal measure. Can Warren Gatland afford to gamble on him at first receiver?

Maverick outside halves can be best described as a top-end supercar. Looks amazing parked outside the Saudi embassy in Mayfair or doing two hundred kilometres an hour down the autobahn. Doesn’t look so good with smoke coming out of the bonnet after spinning off a country lane onto a grass verge.

In all likelihood no, but he will definitely be on the plane barring injury. Dan Biggar is probably the man in the box seat having had a good Six Nations. He is a man Gatland knows well. His strong points are well known and of which there are many. However, there are some limitations to his game. He lacks pace and occasionally he can get drawn into haranguing the referee when things aren’t quite going Wales’ way. Mercifully we haven’t seen it this year so perhaps it’s something that Biggar has resolved.

Johnny Sexton was having an average Six Nations until the last game against England where he came into a bit of form. His partnership with Farrell as a 10-12 combination worked well in 2017 but there has been plenty of water under the bridge since then. Could he withstand the South African onslaught given his injury record and that he is surely, at thirty-five, in the twilight of his rugby career? Like Biggar, he has a good all-round game but not quite the attacking X-factor of Russell.

This brings us to Owen Farrell. His England place is under threat after a poor Six Nations for him and his country. Ditto for George Ford. In his defence, he had not played a lot of club rugby in the build-up to the Championship.

Has Farrell got enough credit in the bank from previous successes to convince Gatland to take him? Very reliable from the tee and tough as teak but limited in attacking variation which is why some would prefer to see the Celtic options at fly-half.

Can Callum Sheedy nail down a bolter spot after showing fine form for Bristol and Wales? He certainly offers a spark going forward with ball in hand. More good games in Gallagher Premiership Rugby and he could be in with an outside chance. Joe Simmonds or Marcus Smith are others who fall into this category but they are even more of an outside chance than Sheedy, given they have had no game time for England.

Down the years – Meet more Mavericks

Ex Cardiff, Pontypool and Wales man Mark Ring can be aptly described as a maverick. He played the majority of his rugby at centre for Wales but played at outside half during the World Cup in 1991. After his move from Cardiff, Ring would play at 10 for Pontypool.

Never one to rely on playing the percentages, Ring would much rather step inside an onrushing defender or throw a high stakes miss pass. He possessed a great right foot along with an eye for space and an instinct for attack. His unorthodoxy proved extremely effective throughout a highly successful career.

See this rematch on Friday at 7:05pm at Eden Park! @BluesRugbyTeam v @crusadersrugby

Spencer had a stand out career for club and country but wasn’t part of a truly successful All-Black side when measured against their own very high standards.

Stuart Barnes was a man who had to always play second fiddle to Rob Andrew. Again for similar reason’s to Spencer when he was preferred to Mehrtens. Andrew would slot over penalties and drop goals while not offering a great deal to the outside backs. Part of this was due to the era where playing safe was the number one priority. In those days tries were only awarded four points.

A stand out performer for Bath, Barnes like other mavericks of his ilk would entertain and get supporters out of their seats.

Multi-talented Danny Cipriani had his development curtailed by a very nasty injury early in his career. This was not long after an encouraging performance against Ireland in the 2008 Six Nations when his career seemed to be on the up and up. Although he was quick to return to the game events didn’t go as planned.

After a few wilderness years and more news in the entertainment pages rather than rugby headlines including a spell in Australia. Cipriani worked hard and got his game back on track. He has now had a long and successful career in the game but not at international level where many had hoped he could flourish. As early as 2011 he has publicly stated that he battles with depression. 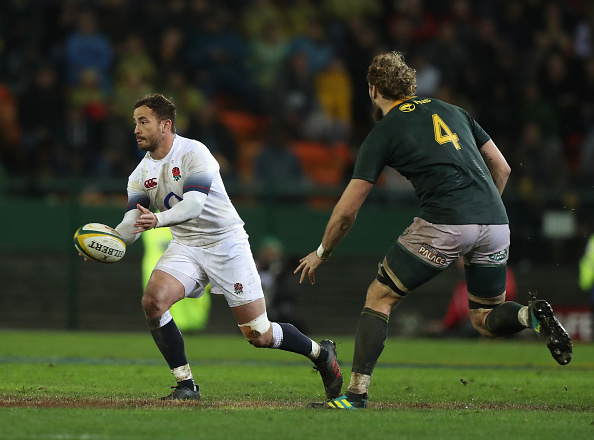 The latest chapter in his career will be a new contract with Bath.

Back to Russell, can he displace Biggar and Farrell?

A lot rides on what kind of game the Lions want to play, player’s form and luck with injuries. If Racing have a good Champions Cup with Russell directing operations, can Gatland afford to leave him out? There are squad considerations to mull over. Could Russell fill in elsewhere like Farrell can? What do the other players and coaches think of his unpredictability? Will he provide courage to attack the Boks or will anxiety spread through the team as a result of defensive misgivings that results from high-risk rugby?

In conclusion, the heart says Russell for the Lions but the head calls for Biggar or Farrell. The Saracen needs a run of good form. Should the Scottish candidate help defeat France in the last game of the Six Nations, and continue to impress for Racing 92, he gives Gatland a dilemma.

Can you suggest any other ‘Mavericks’ who wore number 10? Join the conversation on the LWOS boards, on Twitter, and our Facebook page.