This is a continuation of the first part of the interview with MLR (Major League Rugby) Commissioner George Killebrew. In this interview, the MLR Commissioner talks about topics like developing local talent in North America.

What do you think of having players like Andrew Durutalo, and somebody like Rob Howley as a scout within Major League Rugby? And what does this mean for the Toronto Arrows, Seattle Seawolves, Major League Rugby, Rugby Canada, and USA Rugby?

First and foremost, the lion’s share of our players will come from the United States and Canada. A guy like Chris Robshaw coming over, who captained his national team in a World Cup gives creditability to the league. He is a great role model for the rest of the locker room in San Diego. His teammates can learn how he trains, treats his body and his nutrition. Additionally, learn how he does media interviews and interacts with fans.

Second thing is that these players bring with them a huge fanbase. Chris Robshaw, as an example, with a huge following on Twitter and Instagram. He has hundreds of 1000s of eyeballs following him. And that makes it shine a brighter light on Major League Rugby. He’s got posts to that effect on social media.

That’s important. As we mentioned, most of our teams have that type of icon, that type of international player, who really has the whole package. He competed at the highest level, competed for his country, captained his team, and has a huge social media following.

All those things are important. Now, we’re not going to get away from our mission, which is to grow rugby in the United States and Canada so our teams will always have a majority of the population from our two countries. But adding a piece here and there really helps broaden the scope.

North America,  kind of the last area where rugby hasn’t fully become popular. as it has in Australia, New Zealand, Ireland, England or South Africa, or Argentina. So that really helps in a World Rugby perspective too to have our teams populated with a few international players that can help spread the word backwards.

We had to cancel the season after week five of last season.  The Board of Governors voted to pay all the players 100 percent of their salaries as if they played an entire season. This was key obviously for the local players and international players. The messaging about how they were treated by Major League Rugby really really showed our credibility.

That’s a big deal. I had many players reach out to me to thank me through mainly different social media platforms. Secondly, they all came back next year and agreed to do whatever necessary to grow the game.  It really did strengthen the international reputation of Major League Rugby in the international scene.

How important are academies for growing the game in 2021 and beyond?

It’s crucial. No one does it better than Toronto or Atlanta, they’re two of the best, New England is doing really well, and there is San Diego. All the way from youth rugby to academy rugby to collegiate rugby to professional rugby. We did not have a draft when I first got here, we added the draft fairly quickly. With enough collegiate players, we were able to build two rounds, Toronto opted not to participate because they recruit from the whole country. So we let the 12 U.S. teams go at it. My concern was that would we have enough bodies to fill two rounds?

When we opened registration over 475 registered collegiate rugby players entered our draft, which was an eye-opening thing for me as we closed that loop. This confirms youth loves the sport. The pathway has been created for graduates from the academy to the professional level.

Once COVID restrictions are lifted and we are all together again, and the challenge for me is to have them on-site and to do it exactly the way that the NBA, or the NFL, or the other major leagues do it because it’s a watershed moment in an athlete’s life. You’re able to kind of have that moment where you’ve worked your entire life, to make it to the professional level, after being drafted by a professional team, and all the drama and storytelling that goes with that is just really awesome. The academy piece is crucial to developing players.

Because what happens then, is that when a couple of teams are doing it really well, the teams that aren’t quite there yet, they ramp it up quickly. It’s kind of like an arms race. You don’t want to be left behind. You don’t want everyone talking about the great work that Toronto, Atlanta, New England, San Diego, and Houston are doing. If you’re not in that conversation you’re not going to get in.

What do you see as some of the challenges for MLR in the immediate future?

This year will be an anomaly. Looking long-term, we’re doing a pretty decent job of getting rugby faithful to either attend or watch or participate from an OTT perspective. Now is the time to grow that audience, and become more attractive to new fans. In order to do that, the rugby keys have to be solid.

I remind everyone that we are the only professional rugby league in North America. There are a lot of other sports that have several professional leagues competing against one another in the same school. We don’t have that. So we are playing the highest level of rugby in North America. Now, we have to make the attending piece really great. We have to work on our game presentation. We have to really have something for everyone because it’s not good enough anymore just to get the rugby faithful. You have to grow.

We have to get casual fans and people that aren’t fans at all willing to give us a try. We talked from the league office perspective about when a family is sitting around the dinner table on a Wednesday night trying to decide what they’re going to do as a family on the weekend or on a Saturday night. The only way we’re going to answer that question is if all the stakeholders at the table agree.  For example, all I can say is that I really like going to the Arrows match.

Once the league gets established and tickets start selling, coming to a match will become a social event where friends and families get together. Now you’ve created this event, now you need to find something for the kids to do. They have to have bounce houses and face painters and people making balloons and entertainment. 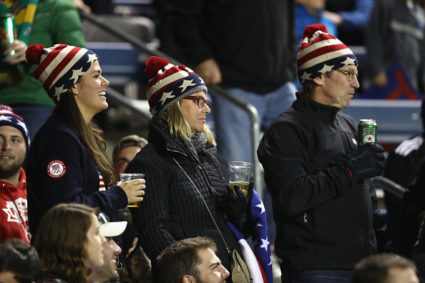 How did it help to plan the MLR season by observing other pro sports leagues with COVID-19 protocols?

One of our advantages is that we are an outdoor sport. I think what we’re seeing now, especially in NCAA basketball, is that it has been very hard to get through that season which is going on currently because of the indoor setting. So, our teams have very strict about robust protocols, as it pertains to COVID. And, you know, we’ll be able to tell you on August 1, how we did. The one thing we have learned is that the organizations and the leagues that have done better than others are the ones taking these protocols.

First of all, a big thanks to MLR Commissioner George Killebrew for this interview with Last Word on Sports. Read part one of the full interview here.

He provided valuable insights on the state of the game of pro-rugby union in North America. Mr. Killerbrew and everyone at MLR should be given credit for paying the full salaries of players over the course of such a disruptive last year.