The rugby league season begins in the UK in just over two months and ends 2021 with a World Cup. If you’re a little bored with rugby union but can’t go to the theatre – as Edinburgh coach Richard Cockerill recently suggested – take a look at how the hard-hitting relatives of union do things.

Here’s everything you need to know about crossing codes in 2021.

League and union share most of the same rules but there are some significant differences. For one, thirteen players take to the field for each side, with ten substitutions allowed per game. The pitch is slightly smaller to accommodate the reduction in players. They play for 80 minutes but the team in possession is only allowed six phases (or tackles) of possession until they must kick the ball away or receive a penalty against them.

There are no rucks. Once a tackle is made the tacklers must roll away and the player in possession stands and rolls the ball through their legs in what’s known as a “chicken scratch”. The scrum-half takes the ball from the chicken scratch and play continues.

If a ball is knocked-on, passed forward, or kicked into touch it results in a scrum. Scrums are performed by six players from each team and are much quicker than union, rarely going against the team in possession or ending in a penalty. The intention is to speed the game up and create opportunities for attack.

There are no lineouts in rugby league, scrums take their place. Scrums were axed and replaced by quick-taps in the 2020 season [for close contact prevention due to covid-19]. It’s likely the rule change will continue in the 2021 season.

A try is worth four points, conversions and penalties two points, and drop goals are one point. And there you are – basics 101.

Northern players struggling to play as often and to as high a standard because of their work commitments. Southern players, associated with the middle-class, were free to play more often thanks to their relative financial comfort. “Broken time” compensation for players who missed work to play for their clubs was proposed by Yorkshire-based clubs in 1893 but was voted down by the RFU. The same Yorkshire-based clubs complained that the southern clubs were over-represented in the RFU. In the two years that followed similar issues were raised regarding player payments, with George Boak and John ‘Jock’ Forsyth being summoned to Court for leaving their jobs without giving proper notice after signing for Huddersfield.

In August 1895, after several different emergency meetings, the 22 representatives of the northern clubs met in Huddersfield and formed the Northern Rugby Football Union. A similar division took place in Australia and New Zealand. The changes in style and rules took place during the years that followed as league established itself as a separate entity to union.

Rugby league in 2021 remains northern and working class-orientated in the UK although in saying that, the sport is gaining more and more fans each season.

Rugby league competitions exist across the world, the largest of which are held annually in England and Australia. They are summer sports, the Betfred Super League season beginning March 25 and ending October 9 in a shortened season. Twelve teams, eleven of which are from northern England usually play 13 home matches in a 27-game regular season, including the Magic Weekend – two days where all teams play at one venue. 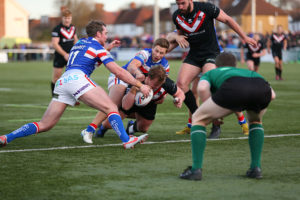 The other is the French team, Catalan Dragons.

Leigh Centurions come into the league this season after Toronto Wolfpack folded at the end of last year due to financial issues. The later season start will result in a repeat of the six-team playoff format used in the delayed 2020 season.

One bottom-placed team is relegated from the Super League each season to the Championship. The championship and League 1 competitions operate under a similar system, with two teams being promoted and relegated. There is also the Coral Challenge Cup, a knockout competition that includes the British national leagues and certain invited amateur clubs. Then there is the World Rugby Challenge competition, a final that takes place between the winners of the Australian NRL and English Super League leagues every February. It offers the opportunity to answer which hemisphere’s club teams are better every year, something the Lions answers only every four years. But it has been delayed this February due to the pandemic.

It’s a good year to get in on rugby league, especially for the home nations. The 2021 World Cup begins on the 23 of October when England men face Samoa at St James’ Park. It will be decided in May whether the tournament will go ahead and with what type of crowds pending the state of the world at that time. Regardless, it is the biggest and most inclusive World Cup to date, with the men’s, women’s, and wheelchair tournaments being played simultaneously.

Almost all venues for the competition are in northern England, with a handful of fixtures taking place in London. They will host the likes of France, New Zealand and the Pacific Island nations such as Fiji, Tonga, Papua New Guinea, and the Cook Islands. Greece and Jamaica make their debuts, whilst Lebanon returns for a third appearance. 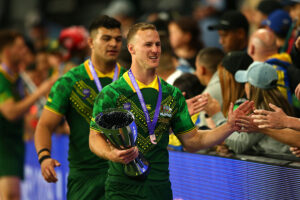 The last rugby league World Cup was held in and won by Australia, who’s also won the most overall with 11/15. Great Britain and New Zealand follow, with three and one World Cup titles. respectively.

To increase the popular opinion of the sport, former footballer John Terry and current professional golfer Lee Westwood have agreed to help England with their preparations. The attraction to league is ever-growing.

All you need to know about UK-based competitions 2021

St Helens, Leeds Rhinos and Wigan Warriors are the usual ones to watch, the former winning the league in 2019 and 2020 and the latter two taking the 2017 and 2018 titles. Combined, the three have won all the league titles since 2006. Bradford Bulls is the only other team to win the league with four wins pre-2006. Salford stepped up last season after years of obscurity, losing the Challenge Cup final to Leeds Rhinos by a point. Whilst underperforming in the league, they’ve made several impressive player and coach signings this season and look to be on the up and up. Sky have had the rights to the Super League since its inaugural season in 1996, beating BT Sports in a recent deal that saw them extend their rights to 2024. The BBC cover the Challenge Cup coverage in its entirety for free.

At the end of the Super League season, three accolades are given out. There is the “Steve Prescott Man of Steel award”, given to the best player of the season. There is the “Albert Goldthorpe Medal”, an award given to the three players who have been the ‘best and fairest’ players in the game. And there is the Super League Dream Team, a selection of the best thirteen players into one squad. The awards are voted for by members of the press, except for the Man of Steel, who is selected by a panel of former players.

Rugby league may be smaller than its union counterpart and it may receive less attention but it can be equally as exciting in whatever way you like to be excited. If you like off the pitch drama, try Hull FC’s mid-season surprise. Their chairman, Adam Pearson, replaced head coach Lee Radford at the live post-match interview following a loss to Warrington and announced that Radford had been sacked effective immediately. Radford later said he had no idea his job was on the line. They told him after the final whistle.

If on the field drama is more your taste, in the last second of the 2020 Super League Grand Final between St Helens and Wigan, the game was 4-4 and about to go to golden point extra time. A 40m drop goal attempt hit the post, bounced into the in-goal area and was touched down by St Helens’ 19-year-old Jack Welsby. St Helens won the game and the title 8-4. And if you like it when sport inspires,  there’s the story of Rob Burrow and Kevin Sinfield. In December 2019, Leeds Rhinos scrum-half Rob Burrow was diagnosed with motor neurone disease at the age of 37. By the time his documentary, “Rob Burrow: My Year with MND” aired in October, he was mostly wheelchair-bound and unable to speak. In response, Leeds director of rugby, Kevin Sinfield, ran seven marathons in seven days, raising over £2.5m for the cause.

By October, you’ll be a League fan!

It’s a good time to get in on rugby league in the UK. With another summer of sport in jeopardy, including the Lions tour, you’ll need something to watch.

Even if you’re not from there or have no ties to the north of England, put twelve names in a hat and start supporting. Even without the fans, it’s a World Cup year and that’s always something to look forward to.

Rugby league in 2021 could be the answer. You’ve got until October to learn the ropes.