England kicked off 2021 with the announcement of their Under 20 Elite Player squad. Coached by Alan Dickens, the Elite Player pathway has to date been a resounding success, the former saint will hope to continue that.

England Rugby U20 – Who are the next names coming through?

The 2019 Rugby World Cup squad contained 81% of players who featured in the under 20 squad. This gives excellent reason to be excited about the pathway and also provides a good place to search for the future of the England squad for years to come. 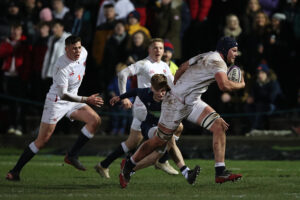 We will put a number of the names under the microscope to see if Last Word on Rugby can spot ‘future stars of England rugby’.

The squad that was announced has numerous new faces within it, of the 32 players selected only 6 are returning to the squad. This is normal, a number of the previous years’ players would now be too old. Some names that may already be more well known after a year of being part of the U20 EPS.

In the forwards there is Alfie Barbeary, who is already knocking on the door of a senior call-up. Richard Capstick, now breaking into the Exeter Chiefs first-team squad. Ben Donnell regularly featuring for London Irish in the second row. The backs are also showing promise, Gabriel Hamer-Webb has begun impressing fans and neutrals alike with his exciting running game. Manu Vunipola has become a regular name for the Saracens team, regularly deputized for Owen Farrell.  Freddie Steward has been a shining light for Leicester Tigers providing hope to the Welford Road faithful for the future. There are others who have started to break into first-team squads and there is still plenty of time for their names to be up in lights.

The six returning players are Harvey Beaton, Jack Clement, Luke Green, Sam Riley, Tom Roebuck, and Jack van Poortvliet. These will naturally be leaders amongst this group having years’ full experience. They will hope to follow in the footsteps of the names mentioned above.

Jack Clement stands out from this list of names, regularly featuring for Gloucester in the Premiership in the back row. A position that is both physically and mentally demanding and has by no means looked out of his depth. Rewarded with a call up to an England training squad

An interesting name amongst the squad is Dan Lancaster, son of the former head coach of the senior side Stuart Lancaster, could a part of England rugby future also be linked with its past? He is one of only 2 players called up from sides outside of the premiership. The young fly half isn’t plying his trade in the championship, he will be featuring for Leeds Tykes in National League 1. A conscious decision to get regular game time.

There will be heavy competition for Lancaster for the fly half shirt, another option is likely to be Charlie Atkinson. The 19 year old Wasp fly half has been recently starting for Wasps in premiership matches whilst Jacob Umaga, another former under 20 member, sits out for mandatory rest. His performances to date have drawn praise and critique but the underlying tone is one of excitement. Exposure at junior international level will only aid his development.

The rugby fans of huge collisions need look no further than Bristol Bears’ Ben Bamber; 6ft 8” and 126kgs at the age of 19.

At the junior level, size can be a significant factor, so Bamber could be a sizeable force at England Rugby U20 level. Having been recruited from Huddersfield Rugby League there will likely be an excellent level of fitness as well with that size. He could be yet another name to come through in the England second row to be excited about

Son of an All Black legend

Another player with a famous father is Lucas Brooke, the eldest son of All Black great Zinzan Brooke. Playing across the back row amongst the London Irish academy he will hope to live up to his father’s name.

At age grade level Brooke’s hard running and ferocious tackling fully justify the call-up. Pointing the selection being purely on merit rather than on the coat tails of his rugby heritage.

Family ties often can be seen amongst the England rugby pathway, numbers of brothers and famous sons have passed through the system. This years incumbent is no exception; Will Joseph is brother to Jonathan. A centre (like his brother) he will be hoping to follow in his footsteps and achieve international recognition.

Another player who has impressed even from schoolboy level rugby is Orlando Bailey. The Bath youngster plays in the 10 shirt and the club itself earmarking him as an incredibly self driven and competitive youngster. They believe they have an exciting prospect on their books and will hope he can showcase that in the years to come. His style to attack the gain line and plays front foot ball which encourages exciting, running rugby.

Another lock off the production line

George Martin may well become one of this group, the ‘unsung hero’. Already having experience in the second row for Leicester Tigers, and impressing in the matches he was playing in the restart of rugby after the break in the season for Covid. He appeared twice before injury ruled him out.

On DEBUT, @LeicesterTigers lock, George Martin led the round with 23 tackles & the highest player share of team tackles (16.1%) – The workhorse, Martin, also had NINE runs, in what was an outstanding debut#rugby pic.twitter.com/3fWRvtiFgX

The young lock will look to get back into the side and continue his progress in 2021.

England Rugby U20 – Looking at another Golden Generation

We have highlighted only a fraction of the names that feature in the squad, and only picked a couple of names out to feature. There will be other names who may go on and become surprises in the junior rugby season.

This group is packed full of strong players and players of high potential. There is even talk of this group through to the under 18 grades being a potential new ‘golden generation’.

Last Word on Rugby will be keeping a keen eye on the players coming through the Elite Player Squad pathway, and more future examples who might represent England rugby in the future.