Jordan Mailata became an NFL starter in just three years after leaving the South Sydney Rabbitoh juniors, a story which is already a remarkable tale. Mailata’s success could see more converts between rugby and the NFL.

Mailata, who briefly starred with the South Sydney Rabbitohs under 20’s team made the switch to American football in 2018. Picked for the International Player Pathway Program, he caught the attention of many American football teams. That saw him signed by the Philadelphia Eagles in the seventh round of the 2018 draft.

After failing to see the field in his first two seasons, Mailata has capitalized on a number of injuries to starting offensive linemen this season, to become one of the few positives in an underwhelming season for the Eagles.

One of the few rugby stars to thrive in the NFL

The Eagles star has become one of the few rugby converts, league or union, to succeed in American football. His current form is gaining plenty of plaudits from NFL analysts.

Since the player pathway program opened up, Christian Wade, Christian Scotland-Williamson, and Alex Gray and have all switched from rugby union to American football – Wade being the most notable. The former England international left Wasps to join the Buffalo Bills, where he remains (albeit on their practice squad).

While rugby league players Jarryd Hayne and Valentine Holmes both briefly pursued careers in the NFL as kick returners. Both possessed the speed, intelligence, and athleticism to succeed, but couldn’t transition to the sport.

Aside from Hayne (see below image), none of those players made a regular-season 53 man roster.

What did they not possess that Mailata has? Is it his bulk, and has he succeeded in his role because of both his Samoan lineage and his ingrained football awareness?

The perception has completely changed with Mailata, who in just his third season has become a starter for the Philadelphia Eagles. That is, despite not knowing a thing about the game just over three years ago.

The Australian wasn’t even able to name positions in the game, only choosing to play left tackle after watching the film Blind Side. Yet he has adapted fantastically well since that realization.

Mailata became a permanent fixture at left tackle for the Philadelphia Eagles on the defensive line and has proved to be one of the franchise’s few bright spots this season. The Australian-born athlete has featured in 13 games so far this season, starting 10 of those games ‘looming large’ in tacklers, centers, and quarterbacks eyelines. 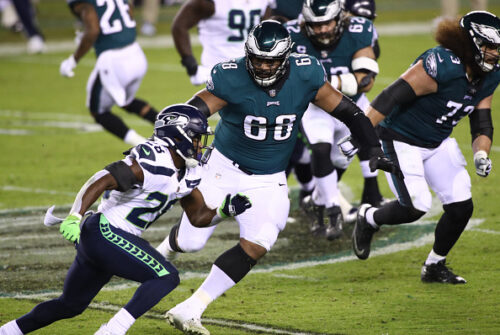 The former South Sydney Rabbitoh youngster has surpassed the achievements of his fellow rugby converts from either code.

The similarities between rugby league and the NFL

Mailata’s success will potentially interest a few more into switching from rugby/rugby league to the NFL, as much due to how lucrative NFL contracts are. This would be a parallel from rugby league players switching to rugby union, which has significantly deeper pockets.

If one aspect can help, it is the ‘set of six tackles’ law in rugby league. Player’s are used to resetting for the next attack – convert that to how American football player’s set for the next down; it has a similarity. Adapting to tackling a player without the ball is one clear difference yet, with Mailata using his bulk to his benefit, the increased physicality will attract many more of footys big men.