The revelations that a block of former rugby players are proceeding with allegations in a [soon to be placed] CTE court case that claims to relate the injuries and increased collision point that the game of rugby union, with cases of on-set dementia and other related illnesses, has produced widespread discussion.

Further to that, only days after World Rugby looked to celebrate the draw of the 2023 Rugby World Cup, an open letter was delivered that reinforces the former player’s message. It inferred that ‘this is a topic that needs your attention’ and, they seem determined to get answers or [indirectly] be compensated.

As the reaction to the news that a probable CTE court case will be taken against national rugby unions, the term Chronic Traumatic Encephalopathy (CTE) is becoming a more widely acknowledged outcome of physical sport. CTE is a progressive degenerative disease of the brain found in people with a history of repetitive brain trauma (often athletes), including symptomatic concussions as well as asymptomatic subconcussive hits to the head that do not cause symptoms.

Knowing this; and in positive movement over the last decade, Unions, and World Rugby have vastly improved the safety measures, protocols, and public awareness of concussion injuries. That fact cannot be disputed. However, past experiences and instances of diagnosed sports-related medical issues for former players like England Rugby World Cup-winning hooker Steve Thompson, are the basis for their collective action.

His claims have caused shockwaves throughout the sport in the last fortnight. And when; or if, and CTE court case is brought, then the sport from this point onward, will need to treat head injuries – in the past or singular acts up to this point in time – as key markers for the future of rugby union.

No individual could be less than sympathetic to the publicity and stories coming from this action. The 42-year-old has been diagnosed with early-onset dementia and probable CTE (Chronic Traumatic Encephalopathy). He sadly revealed he has no memory of the World Cup final he played in, back in 2003. That is a powerful example. One that has seen widespread mindfulness of how dangerous, and what repercussions can follow a career in a contact sport such as rugby.

The formal letter delivered to World Rugby (WR) was received, and in a media release indicated that ‘WR and the Rugby Football Union, and Welsh Rugby Union can confirm they have received a letter of claim from solicitors representing certain players and will now take time to consider its contents. We have been deeply saddened to hear the brave personal accounts from former players.’

It led to Sir Bill Beaumont, chairman of WR and a former England rugby captain, to pen his own personal response.

I have been saddened by the recent accounts of former players and their experiences. My thoughts are with them and anyone in the rugby family who is struggling.

Here is my open letter to all in the game on the important priority area of concussionhttps://t.co/E2RGu06Sj6

While sincere and honest, it will be how the public and parents of current and future players react, that will ultimately drive the game’s judgment. Are these medical diagnoses directly related to the sport? And importantly, how much did unions and clubs protect the welfare of those players ‘if they commonly knew then’ that injuries would occur in the act of the game?

The phrase knew is at the heart of the matter. For the plaintiff and the defendant. For the men and women suffering – did they knowingly continue to play when an injury or concussion was a likely outcome of first-class contact rugby union? And for the stakeholders and organizations running the game, with the information available at that time, did they knowly put the health of any players in jeopardy, just for the sake of a game?

Steve Thompson and others set to pursue CTE court case

Punitive action is likely. That may be in the form of an investigation by not only World Rugby, but maybe by the English government, Sports agencies in the United Kingdom or, it may go to the United Nations or to International Sports bodies. Whichever group looks into the cases, they will find a poor indicator of how badly the game can affect individuals.

Rugby Players Ireland, meanwhile, has released the findings of a study it commissioned in partnership with Trinity College into the general health and wellness of retired sportspeople. In particular, they focused on brain health and used retired elite rowers as a control study.

According to its findings published in the Independent, past participation in rugby and related concussion and head impact exposure is not associated with an overall overt decline in neurocognitive performance. While retired rugby players demonstrated some difficulties in some specific memory tasks, they were not significantly worse than rowers, and performance was not associated with concussion history or exposure to contact sport.

They performed better in tests of reaction, motor speed, and processing than the rowers or the general population. However, the study highlighted other areas of concern including the prevalence of depression and other modifiable risk factors for long-term brain health, such as high blood pressure.

“While this remains an ongoing area of investigation, we are using science and some of the best minds in neuroscience to identify how we can best support our players especially as they enter into retirement from professional sport,” RPI chief Simon Keogh said.

“Concussion remains a concern, but great strides have been made in recent years and it is always the subject of ongoing review in line with scientific developments.

“Nevertheless, owing to their participation in this study, the retired players who were involved will be provided with valuable information about their current brain health and general wellbeing on an individual level.

For Thompson, teammate Lewis Moody, and others like Ben Afeaki in New Zealand (see above image), and former Connacht center Dave McSharry who retired in 2016 after suffering four concussions in a calendar year, they will all want their stories and the outcomes publically heard. This will not be swept under a carpet.

With ongoing publicity, it will certainly bring the topic to the attention of all major rugby unions. Even while the CTE court case may be taken by former players, it is the current players who need clear and truthful information, to make their own decisions on.

In the week that the Autumn Nations Cup ended, England Rugby boss Bill Sweeney welcomed the action taken by the players. Although the RFU chief executive then countered that, when he said the link between concussion and CTE was far less clear. Saying in a France24.com report that there was “no scientific proof of the causal link” between the two; although he added “research is ongoing into that”. 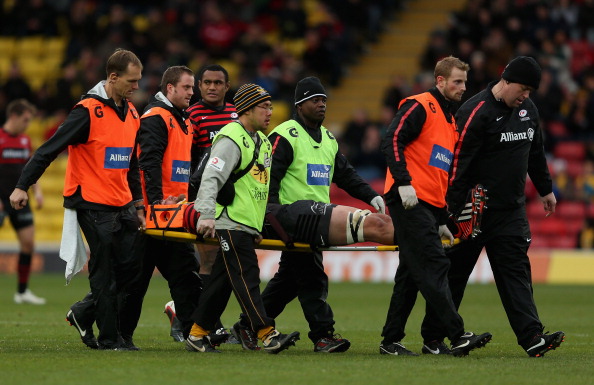 That claim disgusted Barry O’Driscoll (former Irish International and IRB member) who was scathing about Sweeney’s comments, saying players were “not being told the truth. There is proof of CTE, beyond any reasonable doubt. Every bit of research that comes out confirms it.

“Just because we have to wait to cut the head open to confirm it, means it can be ignored. They have wilfully not been accepting it by not telling the players, ‘Your brain might go in a nasty way at an early age’.”

What the former players know is that, their health has deteriorated significantly. That is in comparison to anyone else, who has not played rugby. The medical evidence to link head injuries to rugby is clear. The link to past player’s now with symptoms of dementia or a personality disorder brought on by blows to the head – similar to those studies in football – will need to be accounted for.

If the result informs one player to not play the game; who might have suffered an injury or not, will never be known. But if a current player reads this, and chooses to wear protective headgear and/or to alter his technique when clearing out a ruck, then a positive has come from this recent action. The CTE court case may or may not see World Rugby’s acceptance of past injuries. But it will certainly make them put every effort into educating those who do play, to follow all precautions and protocols as a result of it.