After the final siren blew time, Pablo Matera was standing proudly after leading his 2020 Los Pumas side to a famous, first-ever win over the All Blacks.

More than famous. More like heartfelt, and with all the passion and intent which Argentina has shown in 30 attempts previously to defeat New Zealand. Yet at Bankwest Stadium in Sydney, that unbelievable feat was finally met. The prolonged attempts had all been made towards a tremendous accomplishment.

With the clock ticking away, an incredible opening half was underlined when skipper Pablo Matera and pivotal backline leader Nicholas Sanchez drove their side to a healthy lead over the three-time World Champions. Breaking a string of close-run matches, on this occasion, the Los Pumas squad would not be overrun by an underwhelming All Blacks team.

Led well by Matera, driven expertly by Man of the Match, Nicholas Sanchez, it was unexpected but fans across the globe need to take their hats off to the better team on the day. 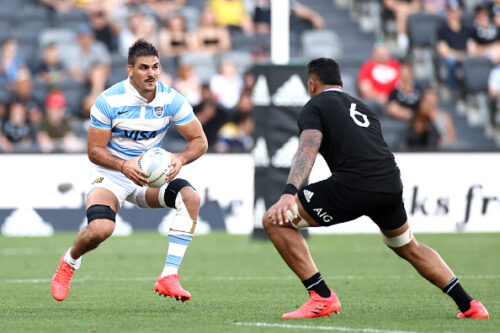 Respected rugby commentator Grant Nisbett exclaimed their remarkable achievement, “history is created in Sydney. The Pumas from Argentina, have beaten the All Blacks for the very first time”.

In front of a raucous crowd filled with ex-pat Argentine and South American fans, the afternoon fixture of the Tri Nations round three match will now be seen as something more. Not only will it be a win in this context, but it is also one that has been earned since the first-ever clash in 1985.

That long wait has seen many close results, with one drawn test match prior to the massive upset. New Zealand capitulated to the huge collective efforts of Argentina, out defended and out-gunned. An epic test where the usual response from the All Blacks was faulty and filled with handling mistakes and overconfidence.

Epic too in that few were predicting it.

Now, in a game where the two sides have had totally different preparations and seasons, the unthinkable has been realized. One that brought Argentine head coach Mario Ledesma to tears.

The sight of the former front-rower holding back tears in his coaches box moments before the whistle proved how profound the moment was. So often the passion and desire to defeat the All Blacks were close to being achieved, yet on this occasion, the entire team played with a newfound confidence that few saw coming.

And the post-match words and emotions on show had every fan applauding. Pablo Matera, so often on the other end of close-fought losses was today, was able to speak with pride in his jersey and in his nation. “This is the biggest day for Argentina rugby.  We just want to show our people [back home] if you work hard, with determination, you can get things done. We are really proud of this team and our whole country.”

Total sporting joy watching Argentina beat the All Blacks for the first time in history. Don't think I've ever seen intensity quite like Pablo Matera's before pic.twitter.com/aplNWJmhCa

A very special win, and one under the weight of needing to travel abroad for many months, to quarantine and to prepare for this first clash in the Pumas fixture list of the reduced Rugby Championship.

Reward for Los Pumas after a full year without Test Rugby

Incredibly, not many players been able to compete on a rugby ground since March. The early end to Super Rugby, and the prolonged layoff since due to the Coronavirus pandemic had meant Argentina’s participation was ‘apparently only in part’. Very few believed in the side’s ability to be competitive. Yet on this day, November 14, 2020, it will forever be seen as a huge turning point for Argentine rugby.

Pablo Matera to knows this, and his remarks after the game pointed to that. He indicated that rugby will benefit across the whole rugby-mad nation. He believes the example has now been set with his squad. “Be confident that if you put in all the work, you gonna achieve things. To be hungry to beat the best team in the world, you keep on going and you’re going to make it.”

That raw emotion and the emphatic devotion to the jersey was evident within minutes of the kick-off.

A scuffle between the two opposing blindside flankers had referee Angus Gardner singling out the Argentine skipper. What the microphone captured was simple, and plain rugby-speak. Matera reacted by saying, “They show no respect, I’m playing for my country!”

That attitude was carried on by men like Marcos Kremer, who like his fellow backrower, gave no quarter. 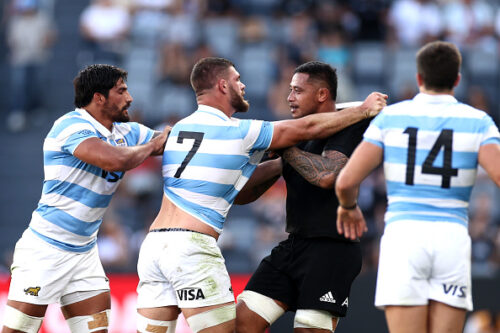 Counting down the minutes, a possible All Blacks reply was near to occurring……nearly yet, a dropped pass or a poor decision when running from a set play, were glaring errors. Discipline in accuracy cost the team, who made uncharacteristic errors [for the second week running].

By the end of 80 minutes, New Zealand would have to concede a long-standing record. The South American nation had outplayed and outmuscled their much-fancied opponents, 25-15. Vamos!