The table as at 11 October was as follows: 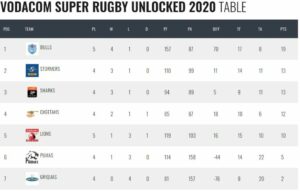 Much has been said of the appointment of Jake White at the Bulls and his decisions to recruit certain players and let others go. The Bulls started their campaign with an unconvincing home win against the Griquas and lost to the Cheetahs in Bloemfontein. They followed this up with convincing home wins against the Sharks and Stormers. They followed this up with an away win against the Lions. Once the squad started to come together under White, it became harder to question White’s decisions. The Bulls have a bye this weekend. Their final Super Rugby Unlocked game is against the Pumas in Pretoria. A bonus-point win would put them in prime position to win the tournament, given their current six-point lead with a game in hand.

The Super Rugby Unlocked does have its imperfections and the Bulls playing their closest opponents on the log at home could be considered an advantage, but the results weren’t close enough to justify that thought.DHL Stormers

The Stormers continue to frustrate their fans. They have a very strong squad, but have yet to produce the results that this squad should. They dodged a bullet against the Pumas, with many pundits feeling that they were very fortunate to beat the Pumas in Nelspruit with some questionable refereeing decisions going their way. They did not have the same luck in Pretoria, with the Bulls defeating them 39 points to 6.  They came back to beat the Griquas in Kimberly by the same margin that they lost to the Bulls.

For the Stormers to have a realistic chance of winning Super Rugby Unlocked, they would need to beat the Cheetahs at home in Cape Town as well as the Sharks away in Durban with bonus points and bank on the Bulls losing to the Pumas in Nelspuit.

There is no doubting that the Sharks have assembled a young, yet very talented squad. A look at their squad reveals a wealth of very young talent. This might not be their year but if that squad is held together and allowed to mature, there is a lot of promise for the future.

Like the Stormers, their defining game of this shortened competition is likely to be their 41 points to 14 loss to the Bulls in Pretoria.

The Cheetahs started the competition strongly with a victory over the now log-leading Bulls. They looked like a team ready to prove a point after being dropped from yet another international competition. First, it was Super Rugby. Most recently, it was PRO14. Their season is most likely to be a case of “what if?”. Their game against the Lions in Johannesburg was canceled due to a COVID-19 scare. What if that game had gone ahead and the Cheetahs won? They would have earned a minimum of 4 points instead of 2 and would then be second on the table with an outside chance of winning the competition. They would be on 14 points instead of 12, ahead of both the Sharks and the Stormers.

This was a big missed opportunity for the Cheetahs and with their international competition future now unknown, they are likely to continue to bleed playing resources.

The Lions will be disappointed with their current standing in the competition. The lowest ranked of the big five of South African rugby Although they did lose a few players who took the exit clause in their contract as they were offered reduced remuneration due to the impact of COVID-19, they also gained a number of players. They lost away to the Stormers and at home to the Bulls. They shared the points with the Cheetahs and in between hammered the Griquas at home in Johannesburg. Without beaten at least two of the other big five teams, there is no chance of featuring at the sharp end of the table.

The Lions will hope that after a few years of being the dominant South African Super Rugby team, they are at the start of a new cycle with a new team and coaching set-up.

As one of the “minnow” teams in the competition, the Pumas would feast off beating a fellow minnow team as well as claiming the scalp of one of the big unions. In the first instance, it was mission accomplished. They defeated the Griquas away in Kimberley. In the second instance, popular opinion is that they were robbed of a home win against the Stormers. Two controversial late tries saw the Stormers burgle a victory.

The Pumas have struggled with injuries this time around and the limitations of a smaller union, being squad depth, hast hurt them. The pleasing thing to note though is the increased number of logos appearing on their jersey. Increased sponsorship will help them to keep their head above water and continue to attract players looking to make an impact.

The Griquas have not entirely lived up to their feisty reputation. Most teams feared a trip to Kimberley as they have always had the ability to play above themselves and tip over more fancied opposition. This simply has not happened this year. They will have to continue to tinker with their squad to regain the competitive edge that the Kwaste are know for.

Like the Pumas, their jerseys are starting to feature more sponsors logos, which is fantastic news for the viability and ability to build a competitive squad.

The competition is heading into its last two weeks. Although there is a clear leader on the table, nothing is certain until the final whistle blows and last points are recorded.