Just as the elongated 2019/20 rugby season is set to draw to a close, attentions switch quickly to the Champions Cup 2020/21 pool draw.

Given the nature of the world we currently live in, the need for fewer fixtures owing to a truncated season, changes have had to be made. Upon first viewing and when you have them first explained, the new rules for the Champions Cup 2020/21 season seem confusing at best. David Challis will offer Last Word on Rugby’s explanation of the new format and how it will operate throughout the season.

The 2020/21 season will involve 24 teams in from Europe’s top competition. This means the top eight will come for each of the Top 14, Pro 14 and Premiership. Sounds simple enough.

From here the 24 teams will get divided into two pools of 12. This get slightly more complex here as each side will play just four games each in their respective pools.

The way these pools and the matches played get decided is also interesting but logical once you wrap your head around it so bear with us.

Embed from Getty Images
Of the eight teams from each league that qualify for the Champions Cup, they are split into four tiers. As things stand these are as follows.

A couple of other things to note before we move on. When the pools are drawn teams from the same tier and the same league cannot be drawn together. For example, this means, La Rochelle and Clermont Auvergne will not be in the same pool as each other. The same applies to Glasgow and the Dragons, for example, as well.

Your tier determines that teams you play

Intrinsically, a tournament in which you do not play every team in your pool seems unfair. To try and counteract this EPCR having used the tier system to determine which teams each team plays based on their ranking.

Best explained through an example, if this year’s champions Exeter were drawn in the same pool as Montpellier, Glasgow and Gloucester, they would play Montpellier and Glasgow home and away in that pool. 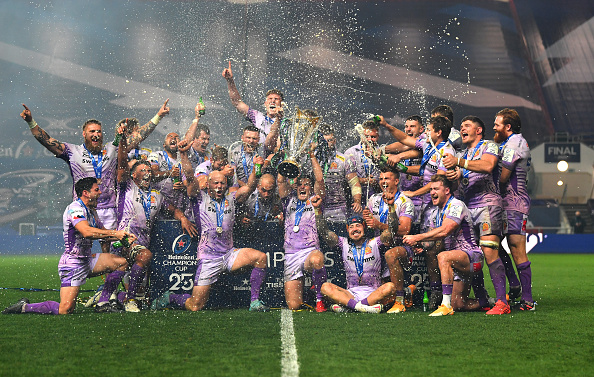 If Edinburgh found itself in a pool with La Rochelle, Scarlets and Sale then it would play just La Rochelle and Sale home as well as away.

Home and away quarter-finals

Each time will, therefore, play four games each with match points applying as normal. The top four teams in each pool will then qualify for the quarter-finals. The next eight (those finishing 5th through 8th in each group) will drop into the Challenge Cup.

To make up another round of matches the quarter-finals will now be in the format of a home and away two-legged tie. This adds an extra dynamic to proceedings which we have never seen before making for a very exciting knockout stage.

Check out our video to make sure you’re up to speed with how it’s all going to work ⤵️ pic.twitter.com/gTLQvh4WMQ

The possibility of some devastating matchups

Naturally, the idea of the tier systems was to give the top-ranked team an advantage by pitting them against comparatively weak opponents. However, as is often the way with these seeded competitions that have failed to come to fruition in many cases.

Some serious names with European pedigree find themselves languishing in tiers three and four making for some potentially mouthwatering matchups in the pool stages. This will also result, in some high profile casualties by virtue of quirks in the tiering system.

Some brilliant examples of this are Toulouse sitting in tier four. This could mean that champions Exeter and Lyon’s reward for a top tier seeding is a visit to European semi-finalists. Perennial quarter-finalists Glasgow and Clermont also find themselves in the lower tiers. Both of which could cause some issues for established sides.

On the other side of the coin sit underdogs Wasps and Bordeaux who have secured themselves a top tier seeding by virtue of surprising but stellar domestic seasons. This could mean a relatively easy run to the knockout stages should things fall in their favour.

In a world accustomed to change and disruption this new format has the potential to be one of the few positives in the rugby world at the moment. Yes, it is a little confusing, however, with a bit of thought, it does make sense and has the ability to produce a quality competition.

Saying all of that, the Heineken Champions Cup 2020/21 fixtures set to start on the weekend of December 10-12.