The Exeter Chiefs have a remarkable story one which has seen them transform into somewhat unexpected Premiership champions. The club are now 2020 Heineken Champions Cup finalists.

Exeter built their solid foundation step by step. The club has gone from an outdated stadium at the turn of the century, playing in English rugby’s second tier, to a sparking new ground and the top of the Premiership where they have finished for the second successive season.

Exeter Chiefs and life in the lower leagues

For the next two seasons, the Chiefs were left battling with one of the more illustrious teams in National League history in Fylde RFC for the top spot in the old national league three. The Chiefs were led throughout the season by current head coach Rob Baxter and Andy Maunder, Jack’s father.

The Chiefs won on that day and as a result. They earned a second consecutive promotion to the old Premiership 2, and endured a torrid season finishing 11th. Nonetheless, Exeter’s fortunes drastically improved the following season as they finished a respectable fifth place.

Promotion to the Premiership and, cementing their status

Since then they continued their progression and after spending nearly a decade in the Championship. It finally culminated in promotion after beating Bristol over two legs in the 2009-10 season.

Exeter won 29-10 at the old Memorial Stadium to follow a 9-6 win at Sandy Park the week. Theses victories started the rise of a side that is now among the very best in the domestic game.

After years of being stuck mid-table, the Chiefs finally pushed on, finishing runners up to Saracens in 2015-16. Before reaching the pinnacle of domestic rugby a year later with their first Premiership triumph. 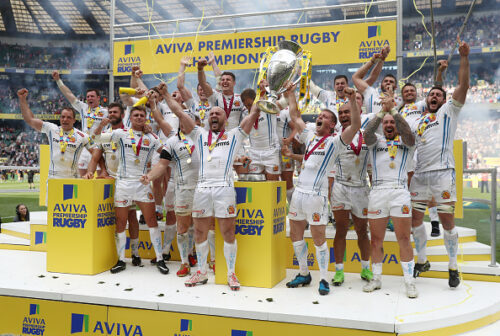 Maintaining the developmental model that took Exeter Chiefs to the top

With the Chiefs dubbed ‘original three’ Gareth Steenson, the man who kicked Exeter into the Premiership, Phil Dollman and Ben Moon at the forefront of the triumph.

Yet despite reaching the heights they are at, Exeter stuck to the model that made them successful. Exeter have also arguably the best developmental system in the Premiership.

In addition, the terrific longevity of the coaching staff at the club has helped massively with Baxter, backs coach Ali Hepher and skills coach Ricky Pellow all still at the club.

The next stage of progression is Europe

After failing to get beyond the pool stages of the Champions Cup for the last few seasons, Exeter’s next phase is to conquer Europe.

That ambition was evident as the Chiefs steamrolled through the pool stages going unbeaten. Exeter then comprehensively beat Northampton to advance to their first-ever semifinal, before their emphatic triumph against Toulouse.

Now, with a showdown with French giants Racing 92 awaiting, the Exeter Chiefs look to finish this chapter of their amazing rise with a maiden Champions Cup title.