As the 2017 Rugby League World Cup heads into it’s second stage, the matches heat up. Fixtures will be held around New Zealand, Australia and Papua New Guinea. The hosts will enjoy great support, as the Pacific sides chase consecutive wins, and the Lions seek their first cup win in RLWC Round 2.

There is a great range scheduled games, but no doubt Match of the Round will be between the ‘Darlings of the Tournament’ Mate Ma’a Tonga taking on Pacific rivals Toa Samoa. It will be a cracker in Hamilton City, on Saturday evening.

Two other Pacific sides who won their first-up games will be out for consecutive wins. Fiji Bati will take on the wounded Welsh Dragons side. Then, one of the World Cup hosts, the  Kumuls take on the Irish. It should be another warm greeting in Port Moresby, but can Papua New Guines take their second Celtic scalp in a week? Their fans will certainly hope so.

England will try to tame the fired up Lebanese side (who won their first match). The Kiwis then look to cement their playoff spot, with a win over Scotland. Italy and the United States will both chase their first tournament victories, and the Aussies should complete the RLWC Round 2 with a win over the French.

Fans will be the winners again this weekend, with a great selection of games, and plenty to talk about. Follow the action here, with Last Word on Rugby.

Three Pacific giants will be chasing their second consecutive wins of the tournament this weekend. A win for Tonga will book them their playoff spot possibly against Fiji. On the other hand, a Fiji Bati win  takes them closer to winning their Pool so will a Kumuls win against the Irish.

The Kumuls were on fire against the Welsh last weekend. Fiji Bati posted the highest score of the tourney with United States while Tonga thrashed Scotland.

This week we play for Pasifika Rugby League https://t.co/aNs0Ouerw3 pic.twitter.com/s0M4amvxkP

The Tongans look formidable against a good Scottish side but their battle with Toa Samoa will really test the character and resolve. Much of the hype is about the ‘big hits’ but with the NRL talent on show–it is almost a Pacifica All Stars game.

Kumuls look hungry and well prepared at home and the Irish have an uphill battle. The Welsh will try to exploit the Fijian defensive structures and keep those fast wingers in check. How effective that is, might be determined by how humid it is in Townsville.

Changes have been made the Australian side to take on the French. A win for the Aussies assures a playoff spot with the French seeking to gain some respect. It is an uphill battle but the French will give their all.

New wing combination has been named by coach Mal Meniga with Tom Trbojevic and Josh Mansour coming in for Dane Gagai and Valentine Holmes. James Maloney takes over from Cooper Cronk with Reagan Campbell-Gillard and Felise Kaufusi making their World Cup debuts.

The Papua New Guinea were ruthless against the Welsh and will be out to demolish the Irish hopes. Both sides won their first round matches and will out for their second. The Kumuls look good playing at home and they will be hard to beat.

Liam Finn together with Kyle Amor and Louie McCarthy-Scarsbrook were instrumental for the Irish last weekend. They will lead the charge for the Irish. However, the Kumuls have enough attacking power from James Segeyaro to the Boas brothers. At one point in their game last weekend they had four attacking hookers in the field. 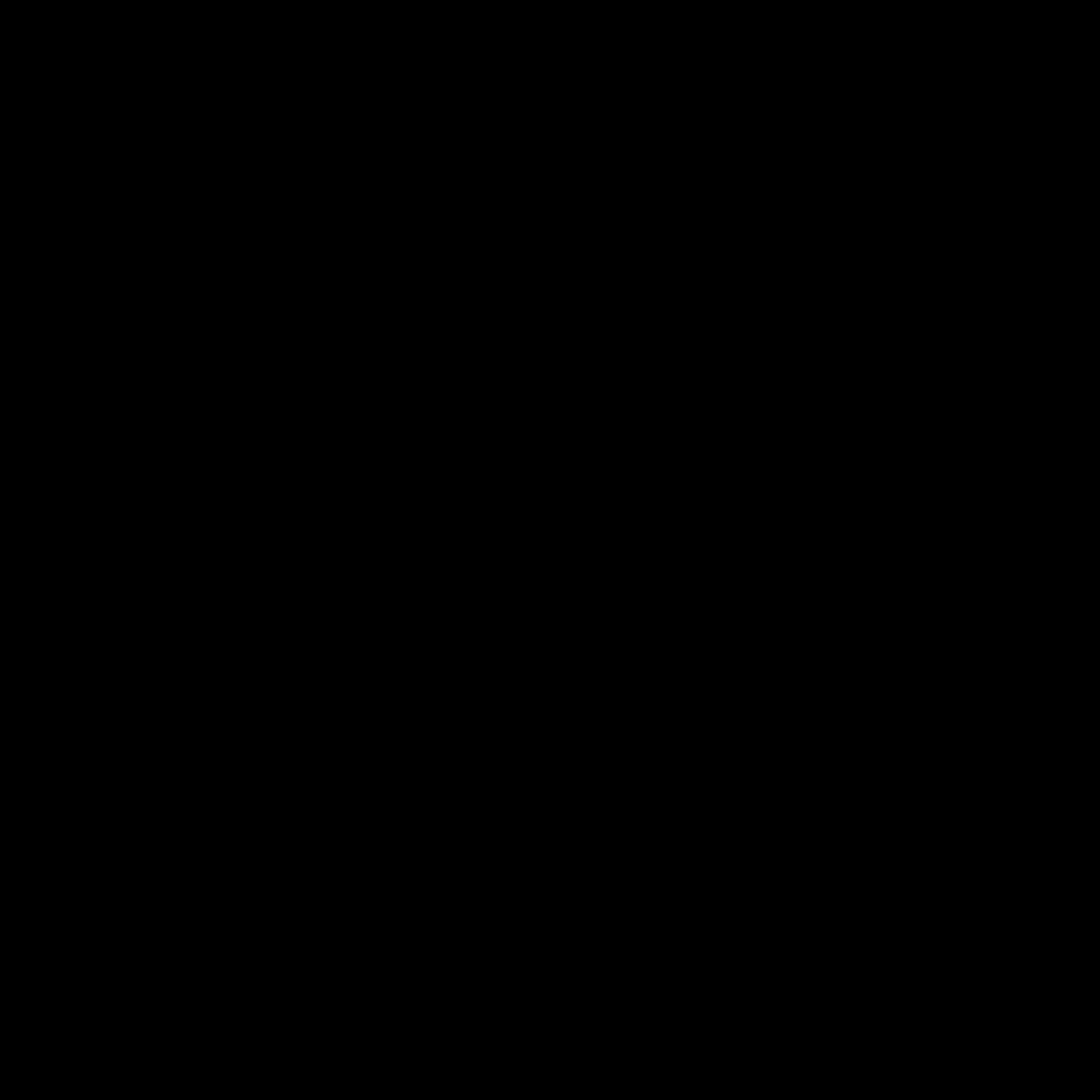 Veterans Peta Hiku and Jason Nightingale return for the Kiwis as they hunt for their second win. They look confident against the Samoans and will try to continue that this weekend.

Danny Brough and Matty Russell have to step up and take charge. Their second half with Tonga was good and if they take that with them against the Kiwis, they can be competitive. Danny Levi off the bench will be exciting to watch. However, nippy North Queensland Cowboys halfback Te Maire Martin will be vital in this game. 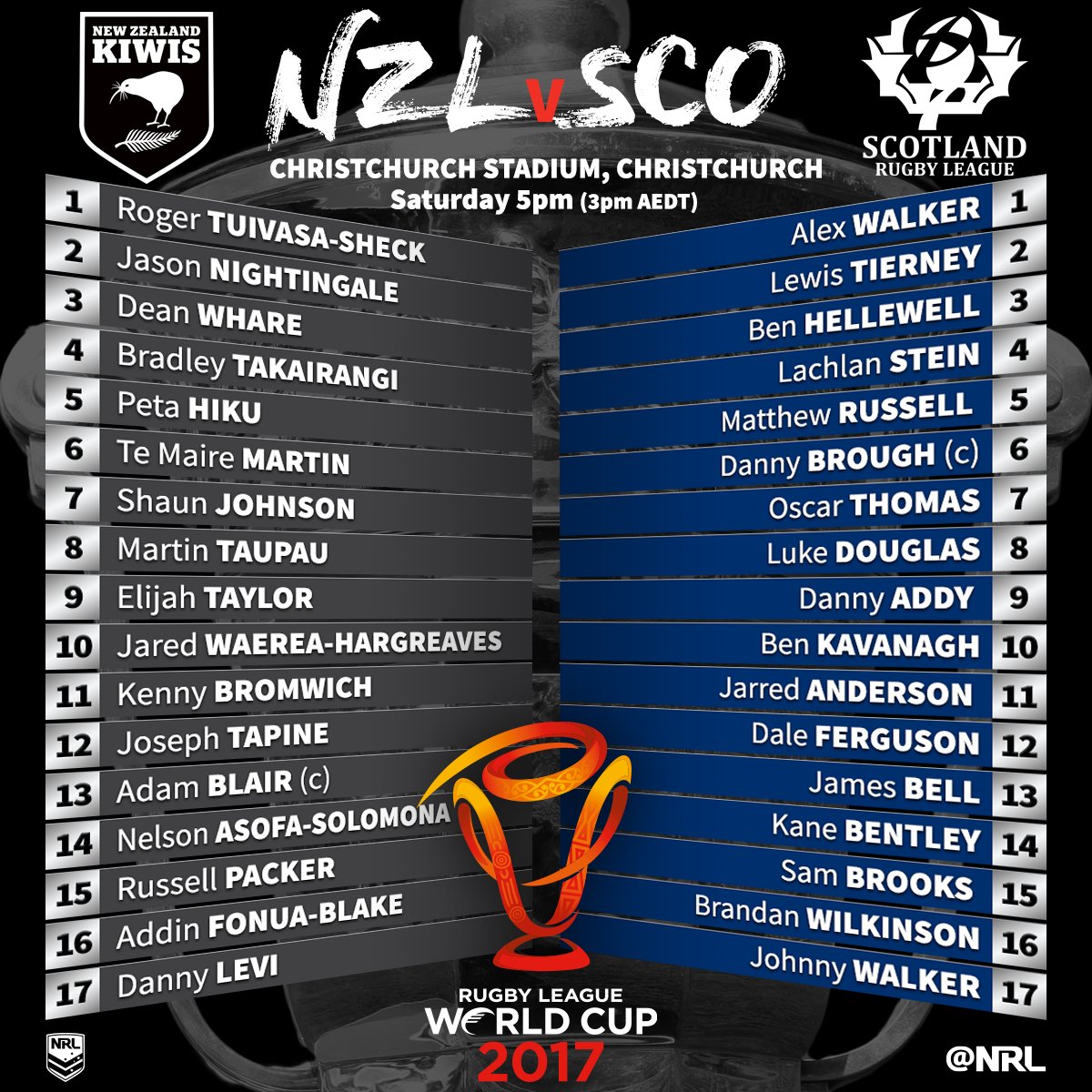 This is the match of the round. Even before the game, the fans from each side are at each other’s throat. Videos were posted up on social media with fans from both sides having a free-for-all brawl in Auckland. It will get even hotter in Hamilton.

Konrad Hurell will miss the game with Solomone Kata taking his spot in the bench. The battle of the forwards is what everyone is out to watch. The Andrew Fifita-Jason Taumalolo show against the Josh Papali’i- Frank Pritchard show. It will be a cracker of a game. Bone crunching tackles and powerful hit-ups should be the norm of the day.

Mike Jennings has to be handled early if the Samoans want to win this game. Joey Leilua has to step up and disrupt the Tongan back three from going on a rampage like the Scots allowed them. 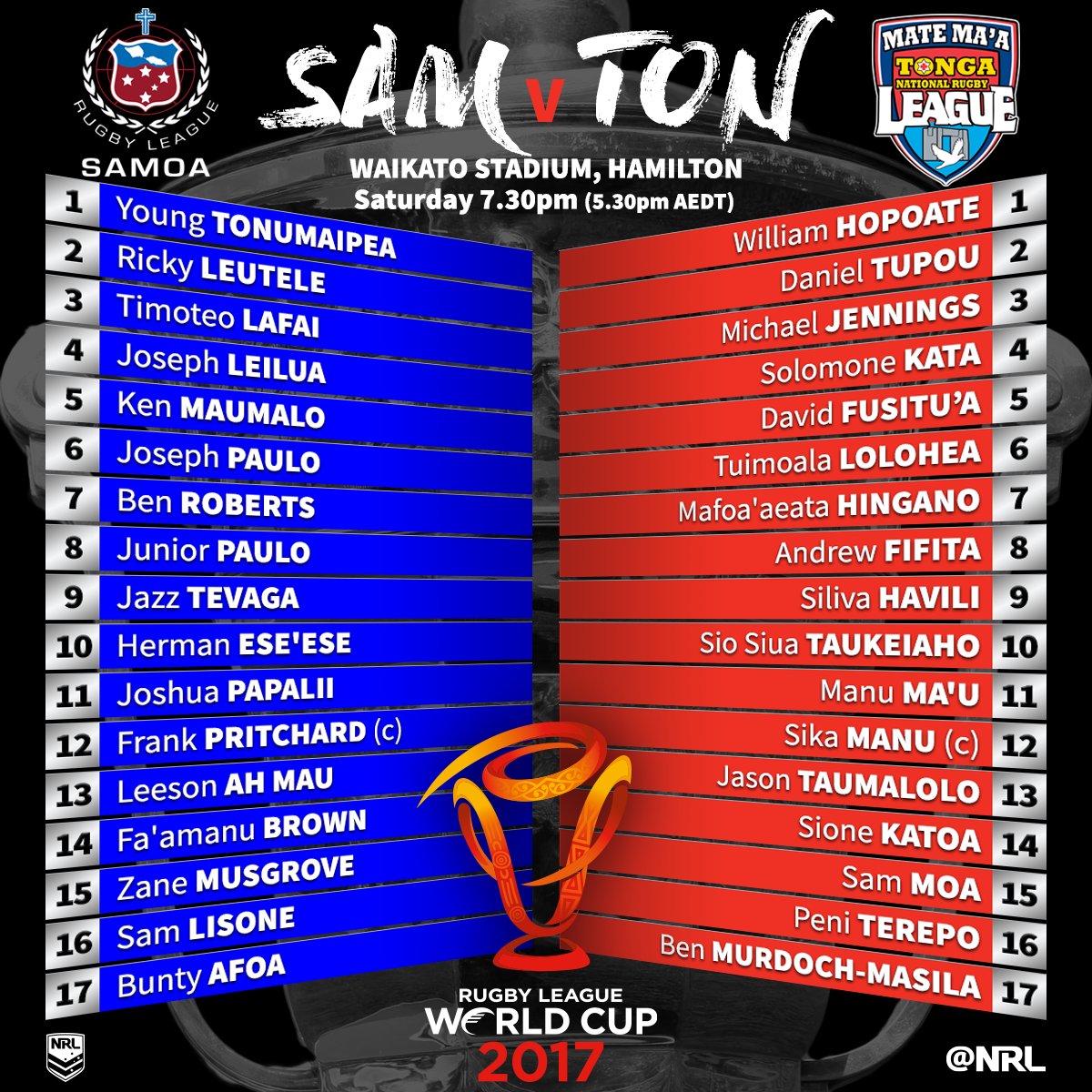 England will be out to try and get their World Cup back on track. Their loss last weekend has really raised eyebrows of their chance. With the loss of Sam Burgess from the team, the onus is on the rest of the senior players to step up. John Bateman and Kallum Watkins have to feed their wingers well in Jermaine McGillvary and Ryan Hall.

The battle of the halves will determine the game. Luke Gale and Gareth Widdop have to take charge early against Robbie Farah and Mitchell Moses. Tim Mannah and Sean O’Loughlin have to take their lead with their respective forward packs. 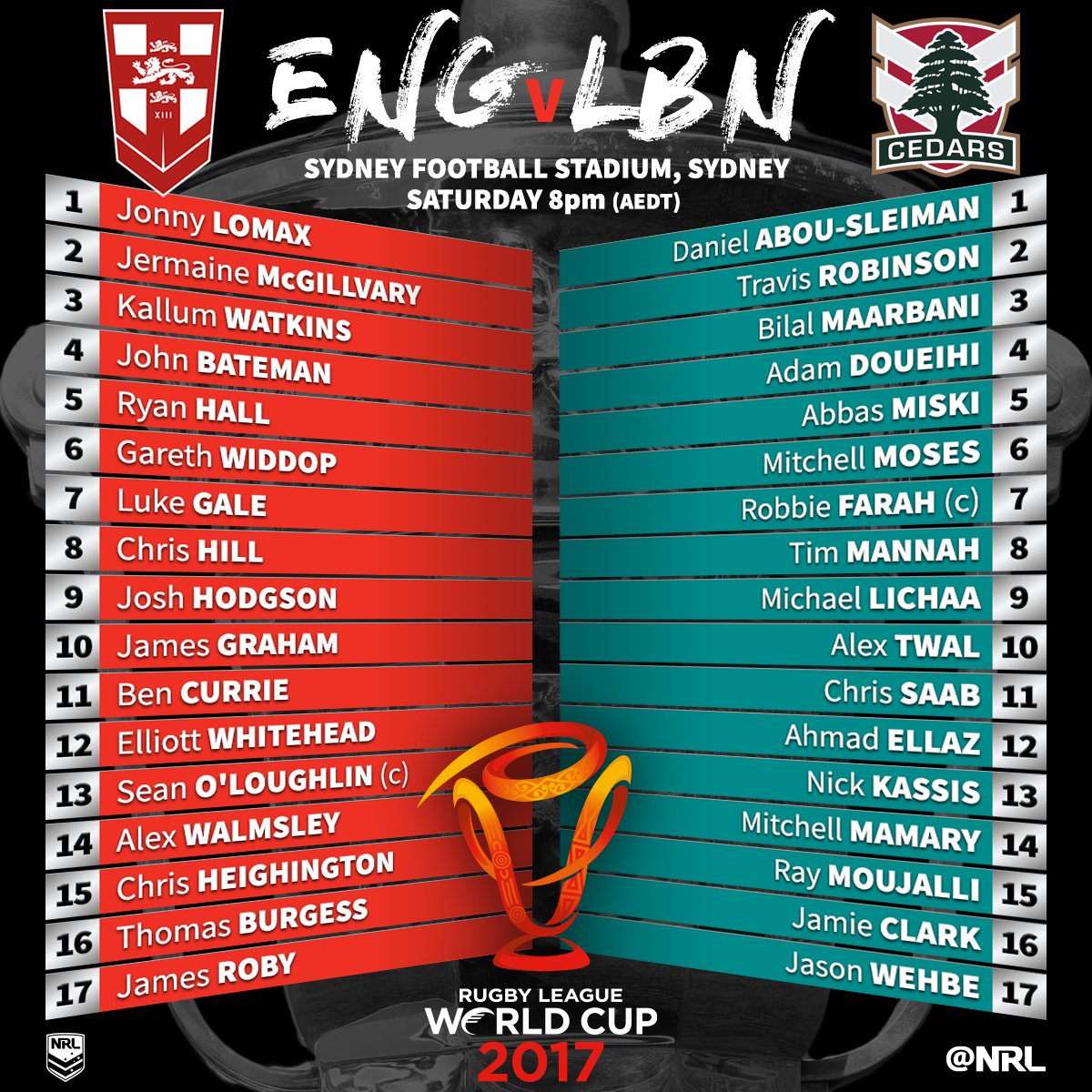 Both of these sides were on the receiving end last weekend against the Fijians and Irish. With news coming in of a fight in the Italian camp it has added to their worries.

The United States side had some positive things when they had possession against Fiji. They will be using that to find rhythm against the Azzurri. Junior Vaivai will be the one to watch for the Hawks. 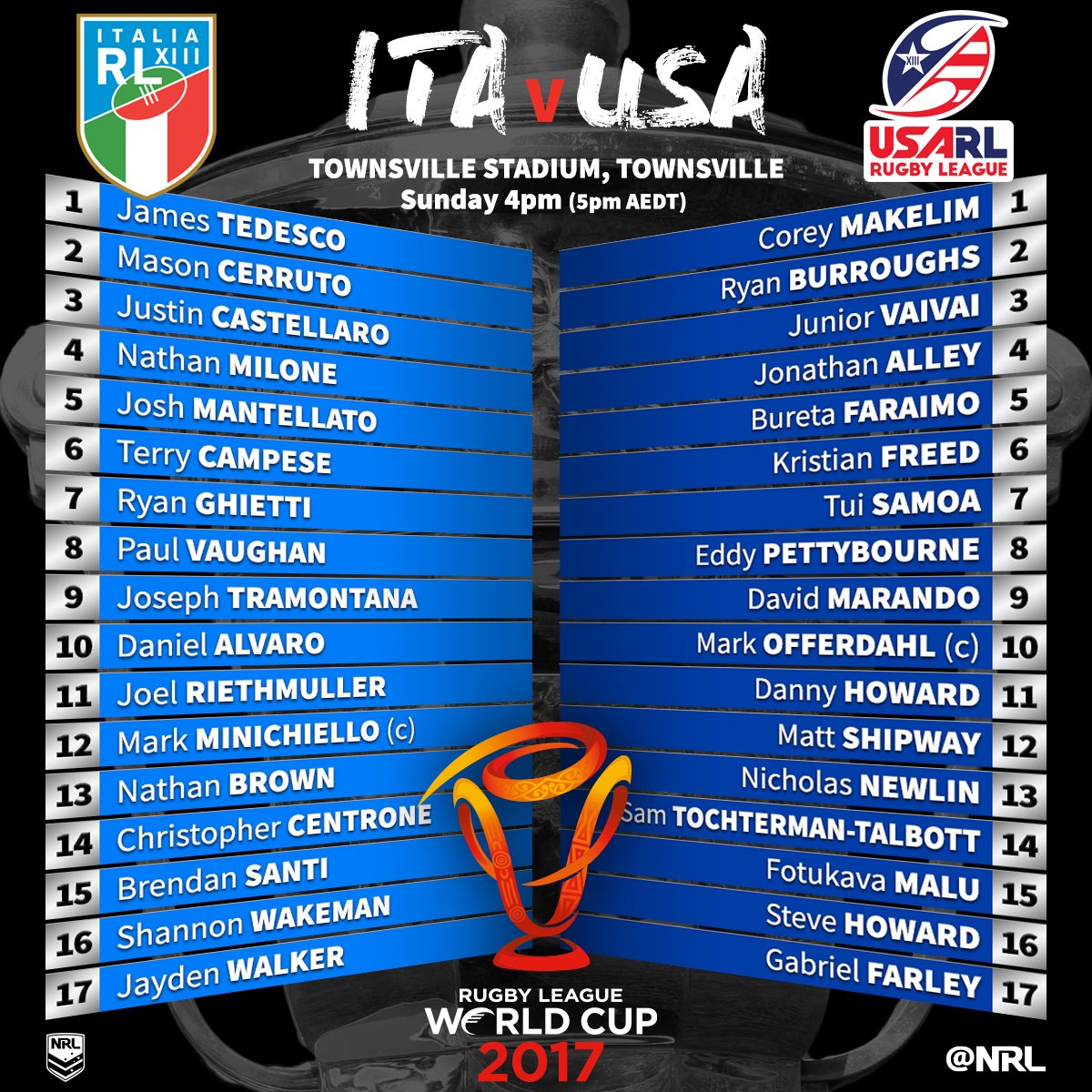 The Bati side are growing in confidence and with Jarryd Hayne growing into his new play-making role, watch the Islanders. Rookie center Tane Milne was outstanding last weekend and could be their biggest weapon in this campaign.

Losing Korbin Sims and Kane Evans will take its toll but they have other eager forwards to call on. Ashton Sims and Eloni Vunakece will have to lead their youngsters. Suliasi Vunivalu was on song last weekend so was Aku Uate.

Eliott Kear together with Rhys Williams and Regan Grace have to contain the backs early if they don’t want a repeat of Port Moresby. It will be the forwards who have to lay the foundation for the Dragons. 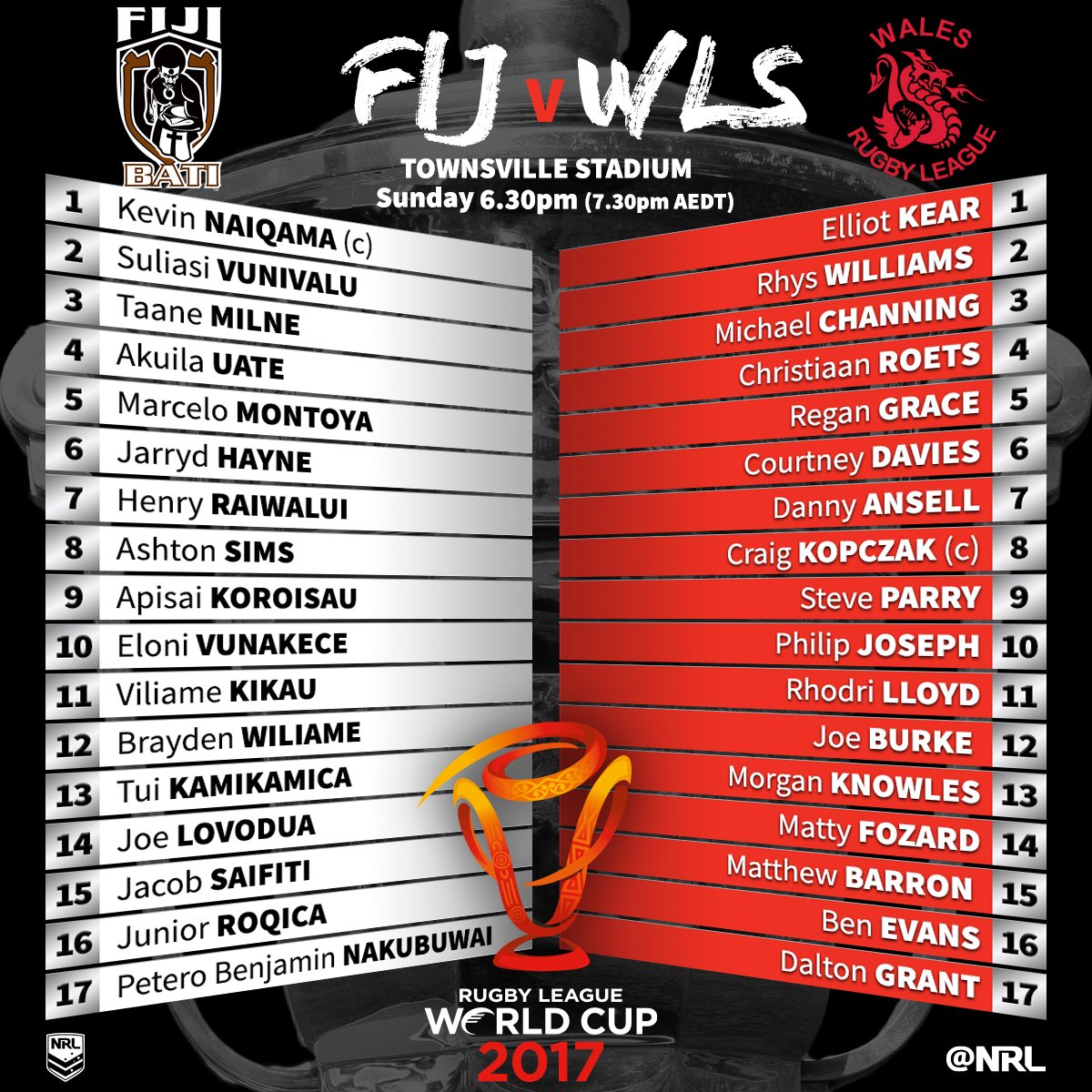 ‘The Verdict’ from Jovi

The Aussies and Kiwis will book their playoff spots this weekend, with the English taking a big step to joining them. Tonga, Fiji and Kumuls can only be a step-away too.

Italy should probably have their first win – unless the Americans bring some real firepower – however the Celtic sides will be struggling again.

As mentioned, the Tongan and Samoan match could break all viewing records; the fans back in the Islands will be stuck to the TV screens. Auckland will be a ghost town, as Pacifica fans head down the highway toward the Tron. It will be a great night at FMG Stadium.

As all eyes will be on them, Port Moresby should be just as vocal. Expect the local support to be a huge boost, and the Lions team will finally find their voice to roar.

RLWC Round 2 is just the start of the most exciting month and a half of action, seen in the Southern Hemisphere for many many years.

Stay Tuned to LWOR as we bring you the 2017 Rugby League World Cup with Senior Editor Scott Hornell and Jovilisi Waqa.