Sunday in Japan, Pro Wrestling Noah sees it’s last truly big show of the year. As they present Noah The Best. A stacked night of action that will be available via WrestleUniverse, or free on the Abema app.

Kinya Okada and Yasutaka Yano are both students in the Noah Dojo. Just like in any other dojo it’s always competition amongst the Noah-borns. With Yano trying to gain a victory over his senior.

Here we have the final preview match of the upcoming GHC Jr Heavyweight Championship match. As Tadasuke and Jr Champion Daisuke Harada try to get the last laugh on one another. However adding their partners Atsushi Kotoge, Junta Miyawaki, Haoh, and Nioh to the mix makes for many combustible elements. As the Noah Juniors are always at war, but keep a close eye on champion and challenger.

The junior heavyweight faction of Hajime Ohara, YO-HEY, and Seiki Yoshioika look to continue their wave of momentum. After settling the leader dispute with Hajime Ohara winning the right in a triple threat. They are aiming for the top, however it’ll be tough against the heavyweights of KONGOH. Katsuhiko Nakajima is coming off a failed challenge GHC Heavyweight Championship challenge. Manabu Soya and Masa Kitamiya are coming off of a failed Tag Team Championship challenge, and Soya looking for a singles with Kazuyuki Fujita. They surely won’t hold back. Will Full Throttle be able to use that built up anger against their opponents, and sneak away with a win. 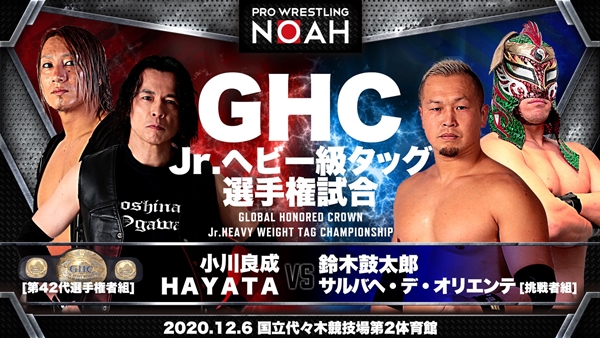 This is more than just a junior tag title match, as a matter of fact, t’s personal. It’s the continuation of Kotaro Suzuki’s quest to end STINGER. After being booted out of the group, by HAYATA and Yoshinari Ogawa after a miscommunication. Kotaro made it his mission to make their lives miserable. He then told them he would bring a friend to help him end them. That would be the mysterious Salvaje de Oriente. Who before Noah has never been seen, or heard of before. Kotaro challenged them for the belts after they regained them at the last big show. STINGER accepted, and they look to end this all here. Who will end this on top? 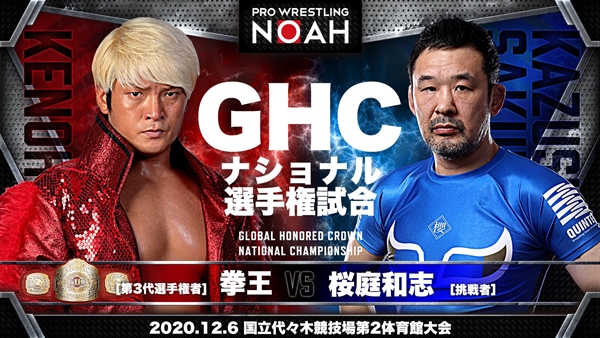 This match was made at the end of Go Shiozaki versus Katsuhiko Nakajima match. Kazushi Sakuraba accompanied Takashi Sugiura to the ring afterward. With the always angry Kenoh confronting Sugiura, before Sakuraba stepped in. Kenoh, angered by this, challenged Sakuraba to come try and take his National Championship. With the contract signing only intensifying things, with Sakuraba simply saying he was excited and hoped the match turned out well. Kenoh on the other hand, believed this was some sort of conspiracy against him, a malfunctioning microphone didn’t help matters. Kenoh blindsided Sakuraba and deliveed a foot stomp off the signing table on top of Sakuraba. Can Sakuraba get revenge by capturing his first singles belt in wrestling?

Big tag match with a lot of underlying stories in it. With Keiji Muto holding two singles victories over both Kaito Kiyomiya and Shuhei Taniguchi this year. Along with being one of the people who trained Daiki Inaba there’s a lot to unpack with Muto himself in the match. However, everyone is looking to gain momentum, especially the team of Kaito Kiyomiya and Yoshiki Inamura who have been announced as the next challengers for the GHC Heavyweight Tag Team Championships. Everyone in this match is looking to move forward, but only one team can win.

Big main event with a lot of history as Sugiura and Shiozaki are no strangers to one another. In what seems to be the last GHC Heavyweight Championship match of the year, Go Shiozaki looks to retain his crown. Takashi Sugiura took exception to Shiozaki proclaiming “I Am NOAH.” He told Go that he can say that after he’s beaten him. Takashi Sugiura wants to win the GHC Heavyweight Championship as he approaches his 20th year in wrestling this month. Sugiura wants to make sure Shiozaki doesn’t forget that Noah’s 20 years are also his. They’ve had countless wars in the past, but this bout is different. Go is on a career run, and no matter how broken he is. He will not quit.  Meanwhile, Sugiura seems to have a chip on his shoulder. Who will emerge as GHC Heavyweight Champion?

Stay tuned to the Last Word on Pro Wrestling for more on this and other stories from around the world of wrestling, as they develop. You can always count on LWOPW to be on top of the major news in the wrestling world, as well as to provide you with analysis, previews, videos, interviews, and editorials on the wrestling world. You can watch Pro Wrestling NOAH as well as DDT, TJPW, and more on Wrestle Universe. Looking to talk wrestling, pro football, or any number of sports? Head on over to the LWOS Boards to engage in conversation with fellow fans!