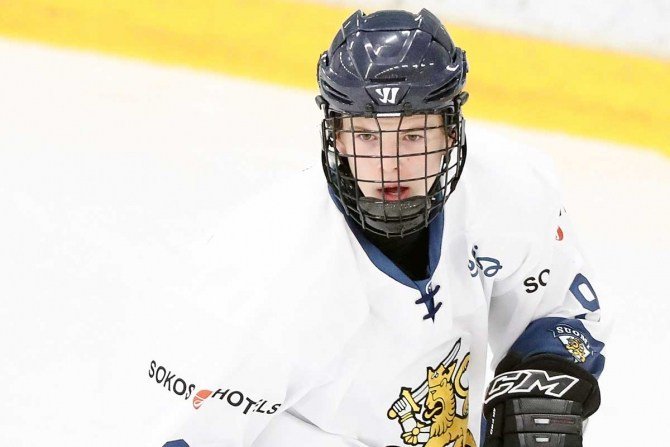 Welcome back to Top Shelf Prospects, the daily column that brings you the next crop of professional hockey players. Each day I will bring you a new player profile or topical article in the lead-up to the 2020 NHL Draft. Be sure to bookmark the site, follow me on Twitter, and spread the word for the site that will bring you analytical and critical profiles and scouting reports! Last Word On Hockey Prospects is your new headquarters for everything “NHL Draft”! We have a complete listing of our draft articles here. Today we look at Topi Niemela.

Finnish defenceman Topi Niemela has advanced quickly up the ranks, as the 17-year-old defenceman is playing for Karpat in the SM Liiga, Finland’s top men’s league. He’s been eased into the league, with limited minutes each night but still has one goal and six assists for seven points in 43 games this season. Niemela put up two points in four games in the Champions Hockey League. He also played one game in the Finnish junior league, picking up one assist. Last season, Niemela had one goal and six assists for seven points in the Finnish Jr. A league. He added four points in 11 playoff games. Niemela helped the Karpat U-20 team to the league title.

Niemela has also been part of Finland’s teams on the international stage, playing in the summer’s Hlinka-Gretzky Cup, scoring three assists in three games. He also played at last spring’s IIHF Under-18 World Championships with one goal in five games. Karpat was part of Finland’s silver-medal winning team at last year’s Under-17 World Hockey Challenge. He scored an assist in six tournament games.

Niemela may be undersized but makes up for it with his outstanding skating ability. His stride is smooth and powerful. Blessed with quick feet, Niemela has an excellent first step and good acceleration in both directions. He can get up the ice to join the rush and get back defensively. His backwards skating is often able to keep up with attacking forwards without getting turned around. When he does have to transition, smooth pivots help him do so quickly. He could stand to be stronger on his skates though. This will help him in the pro game when he battles along the boards and in front of the net.

Niemela combines his strong stickhandling ability with his excellent skating. This allows him to skate the puck out of the defensive end, as well as to carry it in the neutral zone. Niemela starts the transition game with a good first pass. He will sometimes join the rush but is a bit cautious. He could add more to his offensive game by jumping in the play a bit more often. Niemela can use his agility to walk the line at the blueline, creating passing and shooting lanes. He makes smart passes, getting the puck to teammates. He isn’t the most creative player though, preferring the safer passes that keep possession and keep the puck moving to ones that might set up a teammate for a scoring chance.

Niemela has an accurate shot and he gets it through shooting lanes and on the net. He also does a good job of keeping it low, so that teammates can get deflections and rebounds. However, he needs to add power to that shot. This may come with increased upper-body mass. He also could stand to use his wrist shot more. Niemela has a good wrist shot and quick release. It can be effective when he sneaks in, letting it go from the top of the circle.

Niemela has very good mobility, which allows him to play a strong two-way game. He has good gap control and is strong positionally, leading to a strong defensive game. Niemela defends effectively in one-on-one situations, forcing attackers to the outside and away from prime scoring areas. As he continues to add weight to his frame he will become even better at working along the boards and winning battles for loose pucks. Niemela retrieves loose pucks quickly and moves it out of the zone quickly with a good first pass, as well as the ability to skate the puck out of danger with his good stickhandling ability. He is strong positionally and uses his stick to steal the puck from opponents as well as to intercept passes.

Niemela is an undersized defender, part of the new age defender where speed and mobility is prized over size and toughness. However, he still needs to put more muscle on his frame in order to be more effective in the North American game. Niemela is more of a defensive defender than an offensive one. He should be back in Finland next season and will fight for a place on the World Junior team. That time in Europe will give him time to bulk up as the schedule is a little lighter than what we see in North America. If he reaches his potential, he can be an effective top-four defenceman at the next level. Niemela’s game is reminiscent of Victor Mete. This is a stylistic comparison only though, and not one based on skill and ability.

The following is a compilation of some of the highlight packages and features of Topi Niemela that are available on youtube.