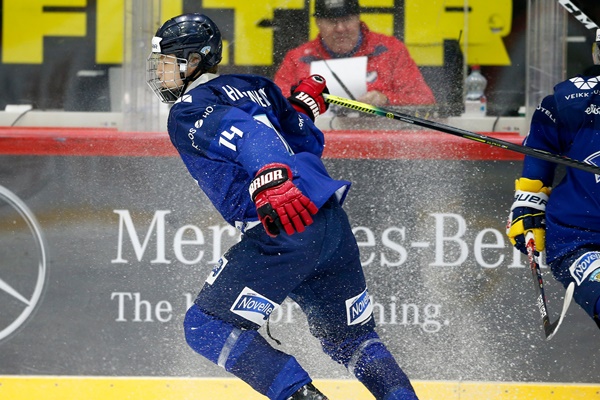 Welcome back to Top Shelf Prospects, the daily column that brings you the next crop of professional hockey players. Each day I will bring you a new player profile or topical article in the lead-up to the 2020 NHL Draft. Be sure to bookmark the site, follow me on Twitter, and spread the word for the site that will bring you analytical and critical profiles and scouting reports! Last Word On Hockey Prospects is your new headquarters for everything “NHL Draft”! We have a complete listing of our draft articles here. Today we look at Roni Hirvonen.

Finnish centre Roni Hirvonen made the jump to the SM Liiga, Finland’s top men’s league, this season despite being just 17 years old. Playing for Assat Pori, the young centre put up five goals and 11 assists for 16 points in 52 games this season. His opportunity in the men’s league came after dominating the Finnish under-20 league as a 16-year-old in 2018-19. Hirvonen put up 21 goals and 34 assists for 55 points in 50 games for the Espoo Blues junior team. He also added three goals and 12 assists for 15 points in 11 playoff games, helping his team reach the Junior A SM Liiga finals.

Hirvonen has also represented Finland on the international stage. He scored four goals and one assist for five points in three games at last summer’s Hlinka-Gretzky Cup. He also played in three games but was held scoreless, as an underage player at the 2019 IIHF Under-18 World Championships. Hirvonen scored two goals in six games at the 2018 Under-17 World Hockey Challenge, helping the Finnish team to a silver medal. His father, Timo Hirvonen, was a long-time player for the Blues in the SM Liiga. Since retiring he has become a coach in Finnish hockey.

An undersized player, Hirvonen makes up for his lack of size with outstanding skating ability. His feet are very quick, as he has an excellent first step and very good acceleration. A smooth stride leads to Hirvonen generating a lot of speed, especially when he gets a bit of room in the neutral zone. Hirvonen’s ability to change speeds can cause real issues on the rush. If he catches a defenceman flat-footed he can blow by and cut to the net. Hirvonen also has excellent agility. His ability to quickly change directions can also give defenders issues. However, Hirvonen needs to get stronger. He can be knocked off balance and off the puck a bit too much right now. As he adds strength, especially core strength, this should improve.

Hirvonen combines his outstanding skating with excellent hands. He can handle the puck and make plays while moving at top speed. If defenders back off to protect against his speed, he has very good vision and can use the wider passing lane to set up a linemate for a scoring chance. He is a very smart player, he reads the play well, anticipating where teammates will be and setting them up at the right time. Hirvonen can also slow down the play, controlling the puck and giving them more time to get open. He is very creative, pulling off plays that most other players will not attempt.

Hirvonen is much more of a natural playmaker than a goal scorer but can play an all-around game. He has a decent shot but could stand to add a bit more power. His wrist shot features a quick release and with his soft hands, he can change the angle on it before letting it go. Hirvonen does not play a perimeter game. He is willing to get to the dirty areas of the ice and take a hit to make a play. Hirvonen is also not afraid to physically engage in battles along the boards. However, he needs to get stronger to play this type of game effectively at the professional level.

Hirvonen uses his smarts to be effective at the defensive end of the ice as well. He supports the defence with backpressure against the rush and working down low against the cycle game. While his lack of size creates issues, his quick stick is good at knocking the puck away from his opponent. He reads the play well, putting himself in a position to cut down passing and shooting lanes. Hirvonen did not play much on the penalty kill with his pro team but that is not unusual given his age and experience. He has played in that role internationally and his speed and anticipation make him a threat to produce short-handed as well.

Hirvonen has the potential to be a top-six forward at the next level if he can continue his development. While he is undersized, his skating and smarts can help him to overcome that. He mostly played on the wing with Assat but got some time at centre late in the year. He has also played at centre at the junior and international levels. Hirvonen will likely spend another year or two in Finland before making his way to North America. His game is reminiscent of Saku Koivu, however, this is a stylistic comparison only and not one based on skill or ability.

The following is a compilation of some of the highlight packages and features of Roni Hirvonen that are available on youtube.