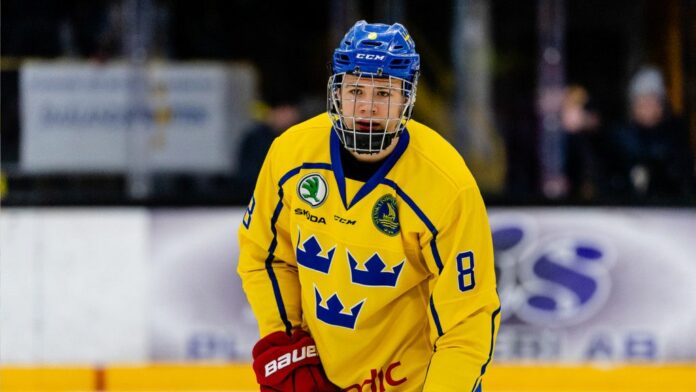 Welcome back to Top Shelf Prospects, the daily column that brings you the next crop of professional hockey players. Each day I will bring you a new player profile or topical article in the lead-up to the 2020 NHL Draft. Be sure to bookmark the site, follow me on Twitter, and spread the word for the site that will bring you analytical and critical profiles and scouting reports! Last Word On Hockey Prospects is your new headquarters for everything “NHL Draft”! We have a complete listing of our draft articles here. Today we look at William Wallinder.

Swedish defenceman William Wallinder put up five goals and 19 assists for 24 points in 37 games in the J20 league this year. He also played one game in the J18 league and dominated, putting up five assists when playing against his own age group. Wallinder also played 18 games in the Allsvenskan tallying two assists but still looking to put up his first goal, in Sweden’s second-tier men’s league. While this does not seem great, there are not many 17-year-olds who even play in the Allsvenskan and his two assists were the most points in the league by any Under-18 player this year.

Wallinder was also a member of Sweden’s entry at the Hlinka-Gretzky Cup but didn’t put up any points. He helped Sweden win a bronze medal. He also scored four points in four games for Modo at the Junior Club World Championship. A regular on Sweden’s Under-18 squad, Wallinder played in twelve games for his country and was likely to be part of their team at the Under-18 World Championships before the tournament was cancelled due to the COVID-19 pandemic.

Wallinder has excellent size, as he is already 6-foot-4 and may still be growing. He is a very good skater, especially for his size. While he is not a burner, his speed in both directions is good and his stride is powerful. He has a good first step and very good acceleration as well. Wallinder is strong on his skates and with good balance. He uses his size to win battles on the boards and in front of the net. He is also extremely agile and has good pivots and edgework. This helps him to cover a lot of ice.

Wallinder prefers to use his wrist shot instead of his slap shot. It is powerful and has a good release. He sneaks down from the point to the top of the circles to get his shot off. He can get it through traffic and on the net. When Wallinder uses his slap shot, it is very powerful. He could stand to work on the accuracy though. Wallinder is also able to walk the line and create shooting lanes thanks to his strong agility and lateral movement. Wallinder is also a good passer. He can quarterback the play from the point, with strong passing skills. He has good vision and finds the passing lanes.

Wallinder’s passing skills also help him in starting the transition game. He can make a good first pass up the ice to start the rush. Wallinder has soft hands for a big man. He can retrieve loose pucks, skate away from forecheckers and start the rush. Wallinder is willing to lead the rush and can create offensive chances. He is also willing to join as a trailer, again making effective use of his wrist shot. His quick hands can change the angle on his shot and fool goaltenders. Wallinder is poised with the puck on his stick he doesn’t overreact to pressure. However he doesn’t always make smart plays with the puck. Sometimes he holds onto it too long instead of moving it quicker.

Wallinder’s defensive game is a bit of a work in progress. He uses his strong skating to maintain good gap control and is tough to beat one-on-one. He creates turnovers with his active stick and can quickly start the transition the other way. Wallinder is willing to play physical. If an attacker tries to beat him on the boards, he can throw a big hit. He is physical on the boards and in front of the net. Wallinder needs to work on his defensive zone coverage though. He can sometimes puck watch when he is away from the play, leaving his man open for a pass from a teammate. Some solid coaching could help him in that area.

Already possessing excellent size and still growing, Wallinder should make NHL scouts and general managers drool. When you add in his strong skating, and his offensive skill, his potential is immense. However, his game is very raw, and he needs some coaching with the puck on his stick as well as defending away from the play. Wallinder needs some development time before he is ready to take the next step. Expect him to spend a couple of more years playing in Sweden before coming to North America. His game is reminiscent of Victor Hedman of the Tampa Bay Lightning but this is a stylistic comparison only and not one based on his skill and ability.

The following is a compilation of some of the highlight packages and features of William Wallinder that are available on youtube.