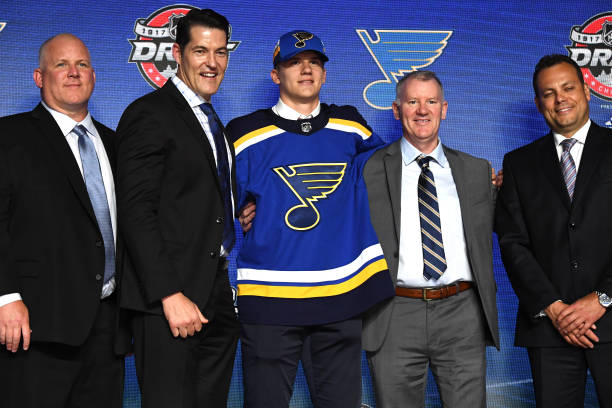 When the St. Louis Blues traded for the 31st pick and selected forward Klim Kostin it was considered a steal. A lot of teams, scouts, and reporters thought he would have been taken in the earlier part of the first round, but somehow he managed to fall. However, he landed with the perfect team.

Klim Kostin is a Late First Round Steal for the St. Louis Blues

Kostin has a good amount of speed and is quite agile for his 6’3”, 195-pound frame according to his scouting report done by LWOH Prospect Guru Ben Kerr. With the help of his lower and upper body strength, he can do a lot down low and against the boards. These skills will help Kostin develop into a top six player for the Blues somewhere down the line. He will shoot the puck from anywhere, much like his future teammate Vladimir Tarasenko.

Where He Could Fit

Now, when Kostin is NHL ready it’s not hard to imagine him in a top six role. When/if this happens, he could very well play top line minutes along with Tarasenko and Paul Stastny. This will provide the Blues with a formidable scoring line capable of putting up points. Kostin is a big bodied player who has great speed as well as great upper and lower body strength. This helps him enter the zone as well as protect the puck down.

When one has a playmaker and skilled passer like Stastny one can cycle the puck with ease. This will create a lot of open space for someone like Tarasenko to capitalize on. It will also help Kostin when he breaks free from defenders. He already has great size as an 18-year-old. He is still growing and could become even bigger and stronger. Kostin already possesses an elite level skill set that he’s shown in flashes, but with a full year down in the AHL, he’ll be able to showcase it on a regular basis.

Stastny and Tarasenko have needed a solid power forward to play with to create space and help drive play. Sometimes this fell into the lap of Jaden Schwartz who is an excellent player but he seems to do best without the top line minutes. If Kostin can eventually take hold of that first line role, the Blues have a solid selection.

In Kostin’s first pro season in 2016-17 that saw him split time between the KHL, VHL, and MHL he didn’t get to put up the offensive numbers people expected from him, primarily due to injury. In eight games with Dynamo Moskva of the KHL, Kostin didn’t score a single point, but down in the VHL, which is the Russian equivalent to the AHL, he had one point in nine games with Dynamo Balashikha. These totals are what made him slip from a top ten scouted player to being chosen 31st overall, unfortunately. However, that shouldn’t make St. Louis doubt the caliber of player Kostin is, and some minor league seasoning can prove that.

When he plays in the AHL next season he could very well be a point-per-game player, if not higher. Another year developing wouldn’t hurt either. For instance, look at Mitch Marner and the Toronto Maple Leafs. That paid off rather quickly.

With his puck protection skills, quick stride, solid shot, and strength it truly is amazing how he didn’t go higher in the draft. His injury certainly proved to be a factor in that. St. Louis y lucked out, however, when they acquired the right to draft him from the Pittsburgh Penguins in the deal that sent Ryan Reaves to Pittsburgh.

If Kostin can play top six minutes with either Tarasenko and Stastny somewhere down the line, the Blues could have a top tier line. Even if he lands on the second line with players like Brayden Schenn and Schwartz, the Blues will have a solid one-two punch that will help the team even more during future postseasons. He will obviously start in the NHL around the bottom six of the team to get used to NHL play. Once he is ready, he’ll quickly be promoted to somewhere in the top six.

From there, it’s up to Kostin on how high his ceiling will be.