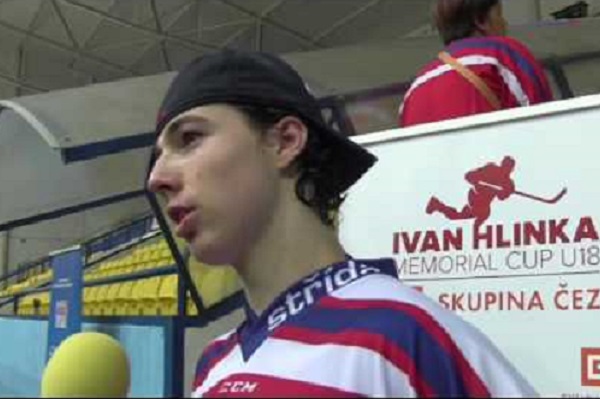 Filip Chytil has broken out on the international stage. He had three points in four games at the 2016 Ivan Hlinka tournament, helping the Czech Republic to a gold medal performance. Chityl also played for the Czechs at the 2017 IIHF Under 18 World Championships, having an  excellent tournament and putting up five points in five games. He also represented the Czech team at the 2017 Five Nations tournament, as well as at the 2015-16 World Under 17 Hockey Challenge.

Chytil plays for HC Ziln in the Czech Extraliga, the top men’s league in the country. While Chytil has had limited ice team, he did put up eight points in 38 games. In 2015-16 he played in the Czech Under 18 league, and had 28 goals and 50 points in just 30 games. Born just 10 days before the September 15th cut-off for the 2017 NHL Draft, he is one of the younger players available.

Chytil is an outstanding skater. His stride is near textbook, and it gives him excellent top-end speed, as well as great power. His first step is very good, as is the acceleration. Chytil reaches that top end speed quickly. He wins races to loose pucks. His speed is also a weapon on the rush, where he can beat defenders to the outside. While Chytil looks skinny in his upper body, his lower body is strong. He has excellent balance, making him tough to knock off the puck. Chytil wins battles along the boards, and is good as establishing position in front of the net. His agility is also good, and allows him to avoid hits and slip past defenders.

Chytil is willing to play a gritty and physical game. He gets in quickly on the forecheck, pressuring defenders into mistakes, and getting to loose pucks. He can create offence by digging the puck out of the corner and getting it to the front of the net. Chytil is not afraid to throw his weight around, or play in the dirty areas of the ice. He will need to improve his upper body strength to continue this type of game at higher levels.

Chytil is also very skilled. He has a heavy wrist shot. He gets that shot off-quickly as well as accurately, with a lightning quick release. It can fool goaltenders from further out with its quickness. Chytil can also play the role of play maker. He can create openings with his skating, and has the stick handling ability to control the play. He is also a very good passer. Chytil can see openings that others do not, and also possesses the skill necessary to take advantage of those openings.

Filip Chytil has a well developed defensive game. He uses his speed and quickness to chase down loose pucks and to quickly transition to offence. He supports his defence, bringing good back pressure as well as support in containing the cycle. Chytil is used as a penalty killer at the international level, due to his defensive ability. He has good anticipation, and the smarts to read plays. His active stick is very good at poke-checking and stealing the puck off his opponents, as well as intercepting passes and creating turnovers.

Filip Chytil has the potential to develop into a top-six centre. He will probably need some time to continue to bulk up, as well as adjust to the North American game. Overall though, the potential is there, but development will be key. Chytil’s style is reminiscent of Tyler Johnson of the Tampa Bay Lightning, but this is a style comparison only and not a talent based on.