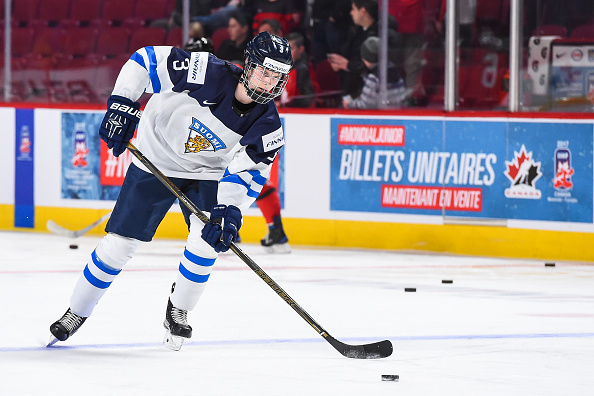 Urho Vaakanainen played for the Finnish national team at the World Juniors. This spring he was part of Finland’s silver medal winning team at the IIHF Under 18 World Championships. He also played in both the Under 17s and Under 18s (winning gold as an underager) last season. He also played at the Ivan Hlinka Tournament in August.

In terms of his club team experience, he spent some time in 2015-16 with the SM-Liiga’s Blues, putting up a goal and six points in 25 games in Finland’s top men’s league.  He was picked by the Windsor Spitfires in the CHL Import Draft, but choose to stay in Finland. This year Vaakaneinen again played in the SM-Liiga, but is representing JYP.  In 41 games he had two goals and four assists. He has added three points in 14 playoff games.

Vaakanainen is very mobile. He has good speed and acceleration in both directions; as well as the edge work and pivots to transition quickly from offence to defence and vice versa. Vaakanainen is strong on his skates, and has good balance. He is able to take advantage of this when fighting against bigger forwards in the corners and in front of the net. That said, he will need to continue to add muscle and strength to his fame, before moving on to a more North American game, especially at the pro level.

Vaakanainen has excellent hockey IQ. He reads the play very well in both the offensive and defensive ends of the ice. He chooses to make the smart plays both with and without the puck. He also can skate the puck out of danger in his own zone, and start the transition game with a good first pass. Offensively he has decent power and accuracy on his shot, and the vision to be a play maker from the blue line. However, he will likely never be a huge offensive contributor, but may develop a little bit of scoring ability.

Vaakanainen plays a very simple game which limits his high end potential. He makes the safe play with the puck, instead of a riskier one with more upside. He also isn’t really creative back at the blueline. He keeps the puck in the zone and puts it in good areas, but he is not one to be patient at the line or to open up passing and shooting lanes.

Defensively he has great gap control and positioning. Vaakanainen takes the body in the corners and in front of the net, but is not a big hitter. He is not afraid to get his nose dirty in battles for the puck, or to clear the crease, but he also does not get himself out of position looking for the big hit. Vaakanainen has very good positioning and is good at cutting down passing and shooting lanes. When he does create a turnover, he starts the transition game quickly. Overall, his game is well-rounded.

Vaakanainen could develop into a solid defensive defenceman. He likely will never be a first unit power play guy, or someone who puts up a lot of points. However he could be a top four defenceman, used to shut down opponents top lines, and to kill penalties. He likely has a year or two in Europe ahead of him, as there is room to grow here. As for a comparison, Vaakanainen’s game is similar to Marc Methot of the Ottawa Senators. However this is a style comparison only, and not a talent based one.