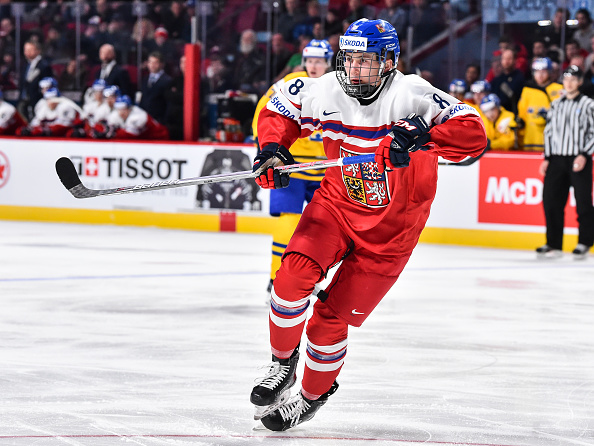 With five points in five games at last year’s World Under-17 Hockey Challenge, and six points in four games in helping the Czechs win the Ivan Hlinka tournament, Martin Necas has shone on the international stage. He added three points in five games at the World Juniors, and was impressive given his underage status in that tournament. Necas was also outstanding in the five nations tournament, as he was one of the best players on the ice throughout. While we haven’t had a chance to see his Czech league games, he has put up 15 points in 41 games, and four goals in 10 playoff games, all while playing in the country’s best men’s league. He has also spent some time in the Czech junior leagues this year.

Necas is an outstanding skater with a good stride along with excellent agility and balance. He has very good speed, and good acceleration. Necas has a powerful lower body, allowing him to win battles on the boards and in front of the net. This should only improve with time, as he adds more muscle to what is generally a pretty skinny frame right now. Necas can use his agility and edgework to get around defenders. Once he gets a step, his ability to change speeds and quickly accelerate allows him to drive to the front of the net.

Necas can handle the puck and make plays while moving at top speed. His hands are quick, and soft; and he protects the puck well. This makes him extremely dangerous on the rush. Necas has excellent vision and makes tough passes through tight areas. He is very creative with his passing game, and can find openings that other players wouldn’t try. He can also be dangerous as a shooter with a quick release on both his wrist and snap shots. Necas will need to add more power going forward.

Necas needs to get to the dirty areas of the ice more consistently. He sometimes has a tendency to play too much of a perimeter game. At his best he gets involved in the corners and in front of the net. He may be willing to do this more as he continues to add strength to his frame. He is good in the cycle game, using his body to protect the puck, and his vision and passing skill to make plays for teammates.

Necas is responsible defensively. He understands how to apply back pressure, as well as how to support the defense down low in the cycle game. Containing his man can be an issue right now due to a lack of strength and muscle mass, but his positioning is good and the effort level is there, so this should improve in time. He is also already good in the face-off circle. Necas understands how to cut down passing and shooting lanes with his body.

Necas has the potential to be a two-way, top six centre at the next level. With his speed and play making ability, as well as his work in his own end, he should be highly sought after on draft day. He will needs some time to continue developing and adding muscle mass, and that could either happen in the Czech Republic next year, or perhaps in the CHL or AHL. In terms of a player comparison, his speed and ability to make plays with the puck is reminiscent of Nathan MacKinnon, of the Colorado Avalanche, but that is a style comparison only, and not one based on skill and ability.

Check back tomorrow for the #13 Prospect on our board.