Can we pick the greatest T20 batsman among the current crop of players in internationals?

Dawid Malan, Babar Azam, and Virat Kohli are the three currently playing batters in T20 format who have the highest averages and played more than 15 games. Each of them has played a pivotal role in the success of his team along with the achievement of some intriguing numbers and statistics.

But who is the greatest T20 batsman between the three?

Pakistan remained on the top spot for 27 months in the ICC T20 rankings for teams thanks to the brilliance of Babar Azam who featured as opener in T20 format, and is currently scoring at the rate of about 50 runs per innings. Australia recently dethroned Pakistan of their top position, and is currently occupying the 1st spot in the ICC T20 rankings. Babar continues to be the star among the Pakistani batsman.

“Confident our team will do well in T20 World Cup.” says Babar Azam

He plays the role of the anchor at the top of the order and ensures that Pakistan very rarely collapse – a feature which is much needed in such a fickle format. He can accelerate if need be as well.

Virat Kohli, famous for his chasing abilities, is currently poised at rank nine in the ICC T20 batsman category. He averages more than 50 runs per innings. Also, he is the highest run scorer among the greatest T20 batsman in the format. He has scored 2794 runs in his 82 matches.

Kohli has almost the perfect game for T20 Cricket. He perfectly guns down totals while chasing and can also start slowly if batting first and then accelerate rapidly towards the end of the innings. His consistency is very impressive.

Is he the greatest T20 batsman?

Dawid Malan from nowhere has shaken the T20 world in only 16 games he played for England. He now has surpassed Babar Azam to become the number 1 ranked T20 batsman after his scintillating performance against Australia during the recent home series. England with a relatively inexperienced side (no Ben Stokes), still came out to be the winners and defeated Australia by 2-1.

Despite just playing 16 games, Dawid Malan has done enough to rank among the best T20 batsman in the world due to his weight of runs and his match-winning ability. He continues to keep Joe Root – the best batsman in England out of the T20 side. This is no mean feat.

To see how close this battle has been in actual among the three greats of T20, we look into the following statistics about the greatest T20 batsman. 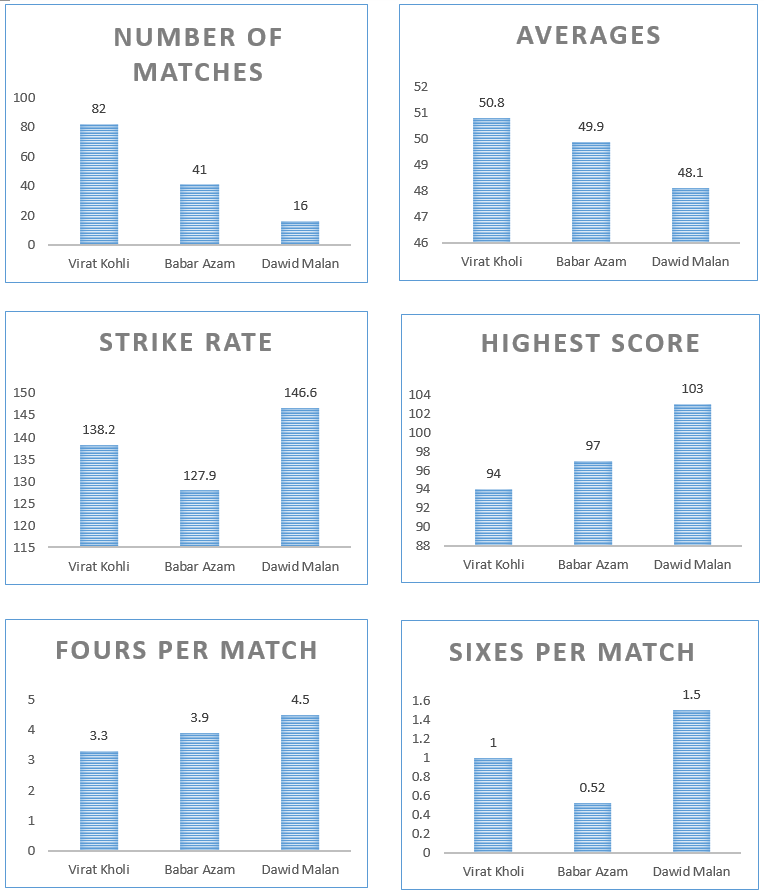 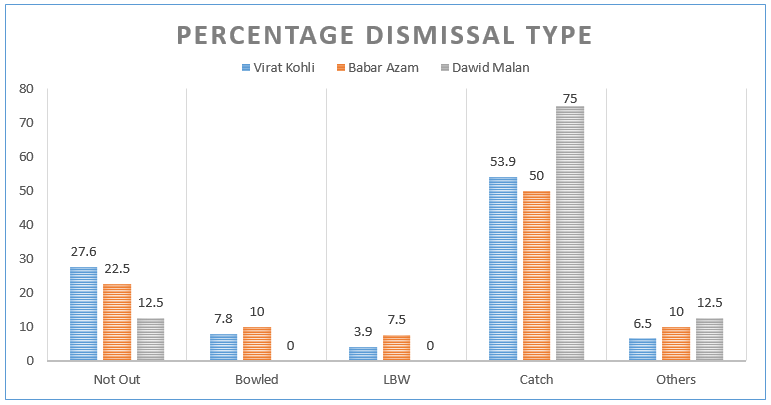 Key highlights from the statistics

The following are the key highlights from the stats above about the greatest T20 batsman.

While Babar Azam captains his side in limited-overs formats, and Virat Kohli in all the three formats,  David Malan is still trying to make his name in one-days and Test cricket. Nevertheless, all of these three batters are well established in T20s. It would interesting to see as this competition matures and unfolds. It is difficult to pinpoint who is the greatest T20 batsman among the three.