As he got ready to face Adam Zampa with England needing six runs from eight balls to win the T-20 International and the series versus arch-rivals Australia, Jos Buttler calmly came down the wicket and hit the spinner for a straight six to seal an England victory.

That is the way the Taunton born wicket-keeper batsman plays his game…with freedom, aggression and the confidence that exudes his persona. It has however, not always been such smooth sailing for the soon to be 30-year old(his birthday is the 8th of September), as he has had his critics.

This summer of cricket has laid to rest some of those concerns.

Matches against the West Indies, Pakistan and Australia in the Test and T-20 have given the Lancashire and Rajasthan player the chance to show his full repertoire of ability and strokes, albeit a gradual progression of form.

Scores of 35, nine, 40 and 0 did not get the critics off his back, not to mention he was prone to the odd mistake or two behind the stumps. However with the series tied at one apiece and the third and deciding Test at his home ground of Old Trafford, Jos Buttler came to the fore.

He arrived at the crease with his team in a spot of bother at 122-4 to join the talented, but in-experienced Ollie Pope. The pair put on 140 runs for the fifth wicket, with Jos Butler contributing 67. What was interesting to see was how Butler “batted to the situation,” as he scored his runs off 142 balls with a strike-rate of 47, almost unheard of from the dashing player.

He accessed the situation and displayed the temperament which eventually led to his side making a total of 369. He added five catches to go with his runs, as England won the match by a margin of 269 runs to take the series 2-1. Players like Jos Butler need to have their workload carefully managed especially as the games came thick and fast and he was rested for the ODI series with Ireland.

However as August came, a Test series versus Pakistan provided another opportunity for Butler to take the game by storm.

In the first Test in Manchester, England were behind the eight ball all game and seemed for all counts to be heading for a loss, that was until Butler had his say…He came in with the score at 106-4 with his team needing 277 to win and soon he saw batting partner Pope go to leave his team tottering on 117-5.

He was joined by Chris Woakes, another player who’s place in the Test team has been up for debate, but the pair put the Pakistan bowlers to the sword. At first though, the pair used their tactical nous to adjust to the visitors bowling and once that was done, they pressed on the accelerator.

Drives through the gaps, pulls, cuts and turning one’s into two’s, the pair was involved in a whirlwind batting partnership. It forced Pakistan captain Azhar Ali to spread the field in an effort to stem the run flow, but to no avail. Both Butler and Woakes scored at a strike rate of more than 70 and by the time Butler was out for 75, England needed just 20 more which they would comfortably achieve.

It was a batting display and partnership fitting of the occasion.

The second and third test

The second Test would be ruined by the rain, but the third Test yet again showed Butler’s growing reputation.

In Southampton, England captain Joe Root won the toss and elected to take first strike. Yet again Butler found himself coming to the wicket with his team struggling at 127-4. He joined Zak Crawley who was playing just his eighth Test and the pair set about repairing the damage.

Butler once again showed his penchant to bat according to what the situation called for and it was Kent player Crawley who was that bit more aggressive of the two and Buttler’s advice and influence clearly helped the 22-year old. The pair added 359 runs from 94 overs to put their team in a commanding position, with Crawley getting a double century and Butler 153 runs from 311 balls with 13 fours and two sixes.

Butler then showed his immense athleticism with a flying catch down the leg side off Stuart Broad to dismiss Shaheen Afridi! What.A.Catch. Had there been a crowd at the Ageas Bowl, they would have certainly been on their feet. The match would eventually end in a draw as the weather again had it’s say and England won the Test series with Butler claiming the Player of the Series.

He would not participate in the T-20 series versus the same opponents, but was back for the Australia contest, can’t keep a man of Butler’s significance out against the “Old Enemy” right?

Batting at the top of the order in the first contest, Butler blasted 44 off 29 balls with five 4’s and two 6’s, as his team reached a total of 162-7 and narrowly edge out the visitors for victory. They won by two runs with a superb all-round bowling display as England pulled back the Aussies when defeat seemed inevitable.

It goes without saying that Butler would play his part yet again in the second and what turned out to be the series clinching win.

The “Men from Down Under” made a competitive 157-7 off their allotted 20 overs. Butler strode to the crease and looked a man in confident mode and he displayed as such. At no point during the run chase did Butler looked out of depth, case in point a superb reverse sweep when the score was 87-1 off Ashton Agar.

Butler played a nonchalant drive-clip over cover to bring up his 50 and despite seeing Tom Banton and Eoin Morgan depart in quick succession, Butler was there at the end to clobber the winning runs via a maximum.

What a way to end off the match and win the series.

Following the series being clinched, Butler has returned home to be with his family and is expected to return to squad in time for the ODI series versus the same opponents carded to start this Friday. It’s a three match contest that will finish on the 16th of this month, after which Butler heads off to the UAE to participate in the IPL with the Rajasthan Royals.

Butler has been criticised and deservedly so at times, but the way he has answered those critics with both the gloves and especially the bat, has shown as he turns 30, his prime is now.

There could be much more to come from dashing wicket-keeper batsman. 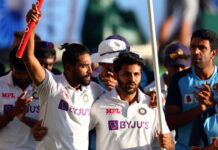