Perhaps for many, the flagship event of the English cricketing summer. The 2020 Vitality Blast begins in earnest on Thursday with eight matches around the country.

Albeit a competition bereft of its usual influx of overseas stars, it is bound to be its usual showpiece nevertheless. Instead of enjoying the best of the world battle it out for the honour of Glamorgan and Durham, instead, their places will be taken by the best local homegrown talents the counties have to offer.

T20 Blast 2020 Without Overseas Players: Why Is It A Positive?

Here we preview the competition, the players to look out for and the favourites to take home the crown on finals day on October 3.

Fourteen counties make their first appearances on Thursday, with the remaining four starting their campaigns the following day. Like the Bob Willis Trophy, the 2020 Vitality Blast will be played in three regionalised groups, consisting of six teams per group.

Each county will play the others in their group twice, meaning there will be 10 group-stage matches for each county.

The Players To Watch Out For

Jordan Cox – Kent The wicketkeeper-batsman Jordan Cox has made his mark on the curtailed English cricket summer. The 19-year-old and Jack Leaning put on a 423-run partnership in the Bob Willis Trophy earlier this month. Succesful in the short-form for England U19s, Cox is definitely one to watch as the Vitality Blast gets underway.

George Munsey – Hampshire recently confirmed the signing of Scotland international George Munsey. The 27 year old has shone on the international stage, most impressively his 127* against the Netherlands. Hampshire fans and neutrals alike can be excited about the prospect of the big hitting Scotsman in 2020.

Callum Taylor – Glamorgan The youngster made his maiden first-class century last week in the Bob Willis trophy. Despite a relatively poor T20 reocrd until this point, the 23 year olds recent form in the red-ball game will leave fans of the Welsh county optimistic.

Can Parkinson Break Into The England Side Again?

Matt Parkinson – Lanashire The leg-spinner Parkinson looks set to be part of the Lightning squad for the entirety of the Blast campaign after an ankle injury ruled him out of England duty. The 23 year old local lad has since returned to fitness and will look to build on an impressive 18 months. England’s loss could be Lancashire’s gain on this one.

Matthew Fisher – Yorkshire The bowler who burst onto the scene in 2013 at the age of just 15, making his debut agaianst Leicestershire. Things haven’t exactly gone to plan since but the 22 year old still boasts an impressive T20 record and will be looking to use this chance to get his career back on the right track this summer.

Last seasons winners Essex Eagles will have high hopes of going close once more. Much of their squad remains the same, although they will be without last summers overseas star Mohammad Amir.

Both Roses counties Lancashire and Yorkshire will fancy their chances. A mixture of exciting youth and experience should be enough to see the cross pennines rivals at least reach the latter stages.

Other counties that will fancy their chances are the likes of Nottinghamshire, who are always there or there abouts. Also Somerset boast some big hitters who will be confident of making Taunton a fortress, as they pave their way to what they hope will be an October finals day at Edgbaston.

So, who are your favourites to lift the title this year? There are lots of strong teams in the competition. One would feel that the team with the best English talent could win the tournament, in the absence of overseas stars. 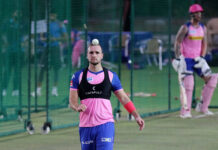