Pakistan fast bowler Mohammad Amir will be joining with the squad in England very soon as reported by Sky Sports. This comes as news after he had announced that he would not be available for selection. Mohammad Amir had initially withdrawn from the Pakistan squad because he and his wife were expecting their second child.

Similar to Joe Root, this meant that there were issues surrounding travelling. A biosecure bubble and moving from venue to venue was a risk. Whether he wanted to take such a risk or not depended on Mohammad Amir. However, Amir says that he is happy to tour now and believes that the risk is much less than before.

Since Mohammad Amir does not represent Pakistan in test match cricket anymore, he will not be required for the initial part of the tour. Instead, he will join after the three test matches, when Pakistan play three T20 Internationals against England.

August 28th is when the first T20 International game is scheduled between England and Pakistan. This game will also take place at the Emirates Old Trafford in Manchester.

He has already tested negative once for the coronavirus. However, as mandatory Mohammad Amir will need to test negative again before he is able to join the squad for the T20 International series.

Some felt that Mohammad Amir did not want to represent Pakistan anymore. Since he retired from test match cricket, he has not been in the best of form in One-Day Internationals. This led Pakistan fans to question his place in the side. The fact that he originally withdrew from the squad, even though the T20Is are at the end of August, led some to believe that Mohammad Amir’s playing days might be over in both formats.

However, Mohammad Amir continues to be the leader of the attack for Pakistan. Despite not taking the number of wickets that he would have liked, he has been instrumental for them. He has built up the pressure through his tight bowling. Amir’s experience will be crucial for Pakistan in the upcoming World T20, whenever it takes place.

It is likely now to take place in February or March 2021 and could be hosted in India instead. Amir will be vital to help the younger pacers such as Naseem Shah and Shaheen Shah Afridi. Pakistan fans will be hoping that Amir rediscovers his best form in time for the World T20 to help them triumph and lift the trophy. Pakistan previously won the World T20 in England in 2009 under Younis Khan’s captaincy. 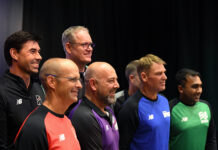