Since the last competitive match finished at the Oval back in September 2019, domestic cricket is seemingly finally moving towards a return in the UK. Club friendlies are set to take place soon.

These friendlies will likely help cricket restart again, amid the fears that the season could be postponed. The coronavirus has been the key reason why the season has not started yet. It has made it difficult for clubs to resume games. This is due to the fears of the virus spreading through saliva on the cricket ball.

It was announced yesterday that evening friendlies are set to take place in the coming weeks ahead of a potential return between Surrey and Middlesex at the Oval. Plus, well as white and red rose rivals Yorkshire and Lancashire were also announced yesterday evening.

The Oval will play host to Surrey and Middlesex for a two-day red-ball match starting on July 26th. Fans will be able to watch this game as it will be streamed online.

The historic battle of the roses will raise the curtain at Headingley when Lancashire take on Yorkshire across the same format on July 24th. Club members of both sides will be able to watch online.

Highlight Of A 2018 Roses Clash

The 1st of August seems the earliest that county cricket may return. There are currently no plans in place regarding how the season may take shape, however, the announcement of friendlies gives hope to its return in some form.

Counties around the country used the government job retention scheme at the start of the pandemic -in order to continue paying players wages through the crisis. Surrey and Lancashire were the only two of the 18 first-class counties who did not furlough players.

Domestic action is likely to return with the Natwest T20 Blast. Counties have already split into regional groups, meaning less travel for players and no requirement for hotel stays. The matches may only last a short period of time and the competition could be completed in a matter of weeks with a winner crowned. T20 cricket is also a more desirable format for broadcasters, potentially a much-needed revenue boost for the counties.

There is still no sign of a return to club cricket in the UK. Tuesday’s daily government briefing discussed the issue with mixed results. The government has expressed concerns over recreational cricket. They said it cannot resume until methods to reduce the risk are in place. Prime Minister Boris Johnson describing the ball as ”a natural vector of disease”

But, what are your thoughts on the safety of club and county cricket? 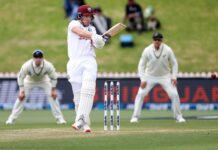