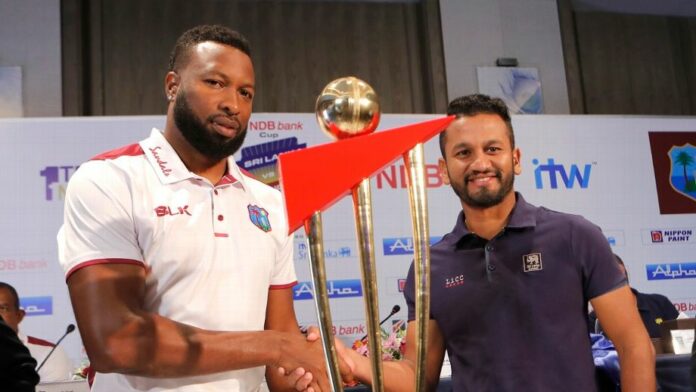 The Lions host the Men in Maroon in a short but significant double limited-overs series in late February to early March. Both nations will be looking to build momentum towards the T20 World Cup that will bowl off in eight months’ time in Australia.

The contest will comprise of a three-match ODI and a couple of T20I’s. It will be the second series for both nations for 2020, with Sri Lanka having played India and the West Indies having hosted Ireland last month. As we stand right now, both are in need of points to move up the rankings in both of these shortened forms of the game.

Sri Lanka and West Indies square off in limited-overs series

In the latest T20 table, the Lankans are ranked eighth on 236 points, with the Windies two places behind in tenth on 223 points, while in the ODI, the teams are neck and neck, with the South Asian nation being at eighth on 81 points, just a single point ahead of the men from the Caribbean.

It sets up an intriguing and what in theory should be close and tightly contested matches. Below are a list of six key aspects of the series:

Firstly, starting with the visitors the West Indies-

1.Overcoming the loss of key batsmen:

The Windies will be missing Evin Lewis and Shimron Hetmyer after both players failed fitness tests just before the squad was picked. Trinidadian Lewis was his team’s leading run-scorer in the Ireland series after he amassed 208 runs in the 50 over format and 101 in the T20’s. He has firmly established himself at the top of the order in the team. Guyanese Hetmyer, on the other hand, struggled versus the Irish at home, but his presence in the squad as batsman and key motivator will need to be compensated. It means that the likes of Brandon King, Nicholas Pooran and the returning Darren Bravo will have to step up and take up the slack for the two young guns.

West Indies recently came under new management and it meant a return of Phil Simmons as the team’s coach, as well as a brand new skipper in Kieron Pollard. So far the start has been solid; they beat Afghanistan in the ODI’s but lost to them in the T20’s, lost both series versus India in the sub-continent, while they won the ODI’s versus Ireland by a 3-0 margin and tied the T20’s with a match being rained out. Pollard firmly stated that the T20 World Cup this year is a top priority and with also the long term focus being on the next ODI World Cup in three years’ time in India, these are the type of series where improvements are needed. Team tactics, solid core of players and consistent performances are likely to be top of the billing for the squad.

3. Improving on a mediocre record versus the hosts.

In overall ODI encounters between the sides, it is very even, with the West Indies having triumphed 28 times to the Sri Lankan’s 26 wins, while three ended in a no result. However, in the last 10 matches, the Asian nation has dominated, as they came out on the winning end eight times with the Windies only gaining two wins in 10 matches. These included the last time the teams met at last year’s World Cup where the 1996 WC winners won by 23 runs. The series win over Afghanistan was the West Indies first series win on the 50 over format in five years and while they whitewashed Ireland, this is a much tougher test for the two-time world champions. Meanwhile, in the shortest format of the game, the Lankans again hold the upper hand, winning six of the nine matches contested versus the Windies. Of-course the biggest match the teams have ever played in was the World Cup final in 2012 in Colombo and the Caribbean team triumphed over the hosts in dramatic fashion, but that win and their preparations for the World Cup in October and November will count for nothing in the upcoming contest.

1. How will they adapt to new coach Mickey Arthur.

The South African born Australian coach was appointed to the post in December of last year and has so far coached in the Test and T20 arenas, but this will be his first assignment in the 50 over format. In the lead up to the series, the recent coach of the Pakistan team has outlined clear plans for his troops. He said “Everybody has certainly been given very clear role definitions, so to see how the guys embrace those role definitions is going to be very, very interesting.” What the roles are, who they have been assigned to and how each player assumes performs with those responsibilities, will be key to how the Lankans not only do well versus the West Indies, but moving forward.

2. Making the most of their all-rounders.

The host will have a plethora of players in the series that are capable at performing with both bat and ball. Angelo Matthews and Thisara Perara are the chief among them with their experience both with their national team and ventures playing in leagues around the world. These two will have to lead the charge in all facets of the game;from scoring quick runs, taking wickets to break up partnerships or calming the dressing room in tight and tense situations, they will have to show up for any success Sri Lanka will have.

This will be Sri Lanka’s first home limited-overs series since hosting New Zealand back in early September. That was followed by away trips to Pakistan, Australia, India and Zimbabwe which yielded mixed results. Back in the friendly confines of Colombo, Hambantota, Kandy etc…they must use the conditions to their benefit. With the pitches expected to be spinner friendly and the Caribbean men perceived susceptibility to the turning ball, the likes of Wanindu Hasaranga, Dhanaanjaya de Silva & Lakshan Sandakan could be key to picking up wickets to both put a halt on the scoring rate and breaking up batting partnerships. How and at what points during their bowling innings captain Dimuth Karunaratne uses his armory at his disposal can make the difference in what volume of runs his team will be chasing.

KXIP vs RR key matchups and players to watch out for:...