This has been one of the most exciting starts to the IPL in the history of the competition. There have been some incredible individual performances, including two hat-tricks from Andrew Tye and Samuel Badree both on the same day. Up to this point, there has only been one hundred so far, from Delhi batsman Sanju Samson. This article looks at the five top players from the competition so far, looking at two batsmen, two bowlers and one all-rounder.

The Kolkata Knight Riders opening batsman and captain Gautam Gambhir is the current holder of the orange cap. The left-hander has scored 182 runs in four innings, averaging an incredible 91. This absurd average is mainly due to the fact that he has been not out in two of his innings, when KKR won by ten and eight wickets against the Gujarat Lions and the Kings XI Punjab respectively. Gambhir has looked in fluent form, but had the opportunity to take his time at the start of the innings when Chris Lynn opened with him. In their first two matches, Lynn scored 125 runs at a strike rate of 192 meaning that Gambhir was in no rush to score at a fast rate as well. This seems to be the general tactic employed by the Knight Riders as after Chris Lynn’s injury, they have chosen to have the pinch hitter Sunil Narine open with the captain. It is clear that Gambhir feels more comfortable when he has a powerful opening partner and this season he has reaped the rewards of being able to play with patience. For a T20 competition, it is incredible to think that the leading run-scorer so far has not hit a six in the tournament.

Australian opener David Warner has started the 2017 IPL in a similar manner to the way he ended last season. Warner has looked in sublime form so far, already having 165 runs to his name. His season started in emphatic style, as he smashed an unbeaten 76 in just his second game to lead the Sunrisers Hyderabad to a nine-wicket win over the Gujarat Lions. That innings included a remarkable four sixes and he hit six fours as well. The only criticism that can be levelled against him at this stage is that he has been making lots of starts but not converting on many. If you exclude his top scoring innings, Warner has scored 89 runs in three innings at an average of around 30. However, he is just getting warmed up. As the tournament progresses we can be sure to see Warner regularly turning these thirties into fifties to set a solid platform for his side.

Heading into the start of the season, it was hard to see which overseas all-rounders the Delhi Daredevils would pick. They have played South African Chris Morris in each of their games and he has certainly repaid their trust. Morris has excelled with both the bat and ball, providing excellent contributions in each of the matches they have played. At the moment he is currently the second highest wicket taker, with seven wickets to his name. Delhi have been using him as a frontline seamer, as he has been made to open the bowling at times and regularly bowls at the death. His ability to bowl a perfect yorker has meant that he has been a constant threat at the back end of the innings. There has been no better example than in his performance against the Kings XI Punjab yesterday, where he produced two excellent deliveries to remove both KC Cariappa and Axar Patel in the final over.

His batting has also been key to Delhi’s successes so far. Agains the Rising Pune Supergiant, Morris smashed 38 runs off just nine balls, striking at a rate of over 400. Out of the nine balls he faced seven were boundaries, as he pummelled three sixes and four fours. This was arguably the most entertaining innings of the tournament as he lifted Delhi into a strong position after Samson’s hundred earlier in the game.

For several years Bhuvneshwar Kumar has proven himself to be one of the best swing bowlers India has to offer. He has demonstrated his skill exceptionally in this year’s competition, where he is the current holder of the purple cap. Kumar has bowled a full quota of overs in each of the four matches he has played, claiming ten wickets already. His tight economy rate has been key to his success, especially at the death, as he has conceded just over 5.5 runs an over. For a bowler to maintain such a low economy rate at the back end of the innings is simply incredible and this is a true testament to how talented a player he is. 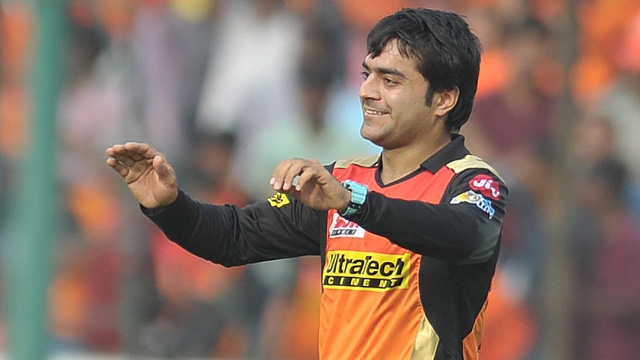 Without a doubt, the find of the tournament has been Rashid Khan. The leg-spinner made history when he made his debut, as the first Afghanistan player to play in the IPL. However, Khan has been one of the best bowlers in the tournament so far, having taken seven wickets. This 18 year-old star has dismissed some of the best players in the world, including Suresh Raina, Rohit Sharma and Brendon McCulllum. His array of variations has been key to his success, with his googly accounting for a large part of his wickets. Moreover, Rashid Khan bowls at a very quick pace meaning that most batsmen don’t have to much time to pick the ball out of his hand. With an economy rate of just over 6.4, Rashid Khan has been a stand-out performer so far and it will be fascinating to see how divesting he will be in the rest of the tournament.