The CFL’s a league of high turnover, which also means high opportunity. Rookies from all over North America are continually making immediate splashes in Canada at young ages. And luckily for each CFL team, they have stars aged 25 or younger on the horizon.

As a 24-year-old rookie, Acklin fit in with Hamilton’s air-raid offence with 708 receiving yards and three touchdowns. If you’re to point out a single asset of Acklin’s game, it’s his hands. With 58 grabs in 2019, Acklin showed time and time again that he’s bound to be a productive, highlight-reel machine.

The 2019 fourth-overall pick cracked the Bombers starting lineup in Week 11 last season and never looked back. Before his 23rd birthday, Desjarlais had started 12 games at left guard for Winnipeg and won a Grey Cup. With his career just underway, there’s definitely NFL potential for the Belle River native.

Diggs quietly managed 73 tackles, 11 special teams tackles, two sacks, and an interception in his rookie season with the Eskimos. The 24-year-old slid into the starting lineup because of Jovan Santos-Knox’s absence to start 2019, which was a blessing in disguise for Edmonton as they may have their cornerstone linebacker in the playmaking Diggs.

Two things are hard to believe about Moore: he’s only played 28 CFL games, and he’s only 23 years old. Moore came four yards short of a 1,000-yard receiving season in 2019, breaking out with the green and white. What’s more impressive is that Moore’s got 2,249 all-purpose yards in those 28 games. The speedster will be a baller for years to come.

Cody Fajardo connects with Kyran Moore and he takes it 98 yards all the way to the house! #CFLGameday #LiveMic pic.twitter.com/K1iHacbcd8

A Central Washington middle linebacker goes to B.C. and tackles everything in sight. Sound familiar? Haynes seems to have the tools to become ‘Adam Bighill 2.0″ after recording 35 tackles and 16 on special teams as a backup with the Lions. In an abysmal year, Haynes was one of the few bright spots on B.C.’s defence.

Metchie is the latest Stampeder to bloom into a polished full-time starter. At safety last season, the Nigerian-born Canadian racked up 48 tackles, seven special teams tackles, and three interceptions. At 23 years old, Metchie’s best days are ahead in the Calgary backfield. On a side note, it’s almost unfair how many options Calgary has for their “rising star.”

2019’s East Division Most Outstanding Rookie was a touchdown machine for the Alouettes, scoring eight times on just 41 catches. Wieneke and quarterback Vernon Adams Jr. built a connection throughout Montreal’s improbable run last season, with the former collecting 569 receiving yards on top of his eight majors. At 6’4 and 215 lbs., watch out for Wieneke.

It’s a shame Dedmon only played five games in 2019, because he surely would have been the face of what was the year of the return. Dedmon’s welcome to the CFL night came last August long after he returned a kick and punt return back for scores, the punt return being one of the CFL’s plays of the year. Dedmon’s going to be the CFL’s best returner, pronto.

WOW. Describe this return in one word aaaannnd… GO.

The first pick of the second round in the 2019 CFL Draft put together a fine rookie season with Toronto. As a 22-year-old, Smith finished with 15 tackles and four sacks during rotational reps at defensive end. The Argos’ product doesn’t scream CFL superstar, but a solid career seems destined for Smith, at the minimum. 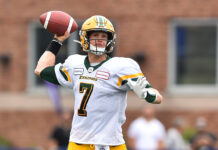