The CFL Draft is always full of excitement as college players see their football dreams come true. 2020 was no exception, and over the course of an evening, 73 Canadians earned a place in the CFL. Despite the NFL Draft changing the fortunes of some, many of U Sports’ top players were signed to a team. However, some teams — and indeed players — fared better than others. Some teams met their needs and more by signing star players; on the other hand, some missed out on much-needed picks and may struggle as a result in the upcoming season. With that in mind, here are the 2020 CFL Draft winners and losers.

“With the second pick in the 2020 Draft, the Argos do in fact select receiver Dejon Brissett from the University of Virginia.” All it took were those words from TSN’s Farhan Lalji, and Toronto fans knew everything was looking up for them. Brissett comes off four years at the University of Richmond and a year at Virginia. That much experience counts for a lot, especially when it’s in the NCAA’s prestigious Division I. Additionally, Brisett’s five years included a spot on the 2018 All-CAA team.

But it’s not only experience that Brisset brings to the table. He also represents the returner/receiver combo that is such a threat in the CFL. Toronto’s return game was very poor in 2019, ranking eighth in punt return yards, sixth in kick return yards, and scoring only one return touchdown. However, with Brissett on board, the Argos special teams will get a major boost.

Brissett accumulated 1,106 return yards in four years at Richmond, which earned him an NCAA special teams player award. On the receiving end, he caught for 1,282 yards and nine touchdowns, which put him at fourth in the CAA in 2017. The Toronto offence will welcome him with open arms and get him onto the field as soon as possible. Brissett will likely become a key point-scorer for the Argos in future seasons.

When B.C. Lions quarterback Mike Reilly was forced out of a game against Edmonton with a broken wrist, Lions fans knew that B.C.’s chances of making the playoffs were over. And they were right — backups Danny O’Brien and Brandon Bridge proved unable to tie the team together, and the Lions went 0-3 without Reilly. Both secondaries have since left the team, which B.C. hoped to deal with by signing Ottawa Redblacks backup Will Arndt.

However, drafting Nathan Rourke of the Ohio Bobcats will give some relief to an offence that has great potential. Rourke has a lot of talent, and Reilly will be able to help develop the rookie as a viable backup. With Rourke in the picture, the Lions’ starter knows his work won’t be erased by an inexperienced backup. In addition, B.C. will probably put Rourke to use in short-yardage situations to minimize the risk to Reilly.

Another reason why Mike Reilly is a big winner in the 2020 CFL Draft is due to fifth-round pick, offensive lineman Matt Guevremont. The Lions struggled to give Reilly adequate protection in 2019, but the addition of the Indiana University of Pennsylvania product will improve this in the coming season. Guevremont’s protection on the o-line was a key factor in the Crimson Hawks’ ranking 6th in the NCAA Div. II in points-per-game — impressive considering 165 teams play in the Division. With the Pickering native up front, the Lions should be able to keep the pocket open longer, giving Reilly more time and less pain.

Lirim Hajrullahu was one of the shining stars on the Hamilton Tiger-Cats. Over two years in the Hammer, the St. Catherines native went 85.4% on field goals, 90.5% on converts, and punted for 7,161 yards. However, Hajrullahu recently signed with the NFL’s LA Rams, leaving the Tabbies without a kicker. The best option for the Ti-Cats seemed to be Marc Liegghio, the Western product. Liegghio was coming off four incredible seasons with the Mustangs, where some called him the best university kicker in Canada. He couldn’t have been a better replacement for Hajrullahu.

Hamilton’s strategy seemed to be to wait until the later rounds, confident that no other team would pick up the kicker. However, their gamble didn’t pay off, and Liegghio went to the Winnipeg Blue Bombers at 37th overall.

Hamilton ended up signing J.J. Molson of the UCLA Bruins. While he is an experienced kicker, Molson doesn’t have anywhere near the consistency of Liegghio. Moreover, he has no punting experience, which is problematic as Hajrullahu was able to cover punting, kickoffs, and place-kicking. Molson will need a lot of development but will likely take to the field immediately as he’s the only option for Hamilton right now. Expect shakier Ti-Cats’ special teams in 2020 if Molson doesn’t get his necessary development.

One of the big losers of the 2020 CFL Draft has to be Adam Sinagra, the Vanier Cup-winning quarterback out of Calgary. Canadian pivots typically don’t fare well in the CFL Draft, and going in Sinagra was overshadowed by Rourke. However, Sinagra looked to be a desirable National option as a backup pivot who could be a future starter. In 2019, he threw for 3,028 yards and 21 touchdowns — more than some CFL starters. Sinagra represents the Canadian experience that many teams desire. While quarterbacks never go early in the CFL draft, most expected the Pointe-Claire native to find a CFL home.

Surprisingly, however, Sinagra went undrafted. Rourke went in the second round, becoming only the third Canadian pivot signed through the CFL Draft in the last five years. While the Montreal Alouettes added Sinagra to their roster as a non-counter, there’s no doubt a lot of disappointment for the young quarterback.

Sinagra also faces competition from Hugo Richard and Matthew Shiltz, the other Montreal backups. Additionally, Montreal is looking to develop Vernon Adams Jr. as a franchise quarterback, which virtually eliminates any of Sinagra’s hope to make it as a starter with the Alouettes anytime soon. 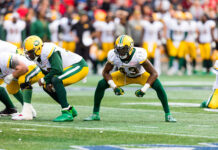