Within the past week a lot has kicked off in the tennis world regarding equal pay between men and women, starting with Indian Wells’ now former CEO Raymond Moore saying that women are “lucky” and “if I was a ladies player I would go down every night on my knees and thank God that Roger Federer and Rafael Nadal were born because they’ve carried this sport”.

Whichever way you want to look at it there’s no question that statement was rude, uncalled-for, and downright disrespectful–but that doesn’t mean he’s wrong. The real issue here is whenever the equal pay debate is brought up if you’re against it then in the eyes of many you’re automatically seen as “sexist,” despite there being several reasons why equal pay in tennis shouldn’t be a thing.

Let’s start with why tennis is the exception; in pretty much every other sport men are paid more and for the most part it’s accepted. We’ll take golf as an example since that’s another sport where majors are the biggest prize. Last year Jason Day won the PGA Championship and received $1,800,000. In the Women’s PGA Championship, Inbee Park came home with the same title and only received $525,000. That’s an astonishing 29.17% of what Jason Day earned.

So why is it in other sports it is widely accepted yet in tennis equal pay should be awarded? Yes you can argue that women’s golf and other sports are less popular than the men’s, but that’s exactly the same situation as tennis is in right now. Last year’s Men’s Wimbledon Final attracted a peak number of viewers in the UK of 9.7 million with the Women’s Final at just 4.3 million. Of course there will obviously be exceptions where the women’s sport attracts more viewers, but overall there’s no doubt the men’s events are more popular. With more popularity comes more sponsors and higher attendance, so there’s no question that they should be rewarded for it.

See, for example, yearly attendance figures from Rogers Cup in Toronto, which alternates between hosting the men and women each year. 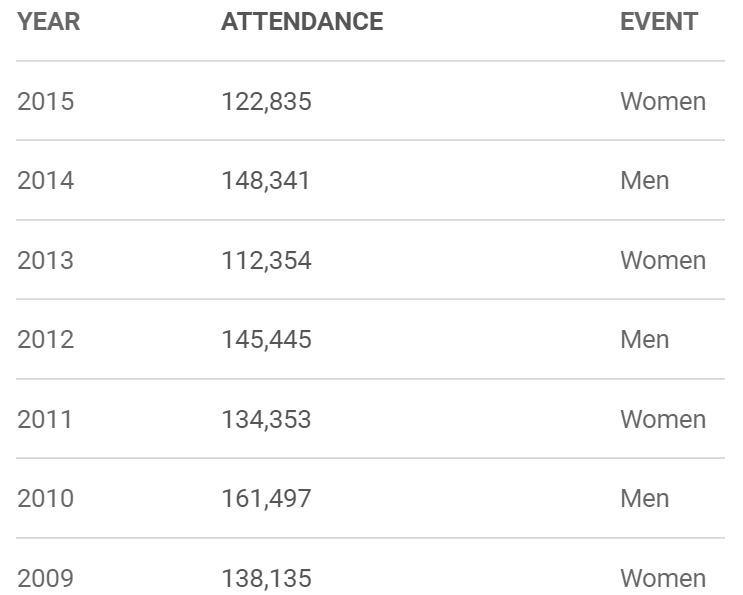 Even if we throw away the logic that men’s tennis is more popular with more viewers it doesn’t make sense for the ATP and WTA to have equal prize money in both events. Both the ATP and WTA are separate entities, so why should they have to pay players the same amount? It would make more sense if both would alter their prize money based on past viewership, sponsors, and ticket sales to their respected tour. That way everybody wins and no tour is left with one gaining and the other losing out. At the end of the day both tours are responsible for the interests of their own players, not the other tour’s.

But some will say Slams aren’t ATP/WTA events and that’s true, however, if both events are equal and men are women are being paid the same why is it that Grand Slams charge more to watch the men’s event? Given it’s tennis’ most prestigious event we’ll look at Wimbledon. Ticket prices for this year are once again (up to £30) higher for the men’s quarterfinals, semifinals, and final than the same round for the women’s. If both events are really equal why are the spectators losing out having to pay more to see the men’s later rounds? Maybe it’s because men’s matches are best of 5 sets? Or maybe it’s because supply-and-demand dictates that they charge more for then men’s matches?

Which is my next point. Although this point has been brought up for years it should be brought up again, in Grand Slams the shortest men’s match sets-wise will be the same as the longest women’s match, yet the end result is they both get paid the same amount. While women have fought for equal pay in majors it’s rather unfair on the men having to play more for the same prize money. At the very least if equal pay is taking place in majors it should at least be with both men and women playing the same format of tennis. When two people have the same job and one is required to do more work than the other, without question it then logically makes sense that the one doing more work will be the one getting paid more.

Whether we like it or not, double standards still do exist. Just look at jobs such as modeling for one; women noticeably make more money than men for doing the same job yet there’s hardly any backlash or fight for equal pay. The reason for this is behind the figures, the women’s clothing industry worldwide is over $200 billion bigger than the men’s. Furthermore, a few years ago the CEO of Graham Stanley Advertising said himself that women in these fields of work are paid more than men because of reasons similar to why men’s sports are bigger than female’s. If we take this into account there’s a clear correlation between who gets paid more with the popularity and size of a sport or industry.

To conclude, the equal pay argument has never been between men and women due to their sex, it’s mainly been because of factors such as the ones I’ve mentioned. If in the future women’s tennis overtakes the men’s in viewership, ticket sales, and so on then women should be paid more–there’s no question about it. But as it stands it just happens that the men’s game is bigger than the women’s and because of that they deserve to be paid more, not just the same.

How many slams will Novak Djokovic end up with at the end of his career? in LastWordOnSports’s Hangs on LockerDome